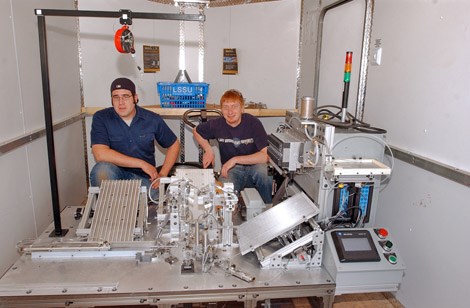 SAULT STE. MARIE, MI - An Upper Peninsula gun-sight maker that has been in business for more than 100 years has been able to dramatically improve production and hire more employees since working with Lake Superior State University's Product Development Center.

The LSSU PDC has completed a major automation project for Marble Arms, which has been manufacturing gun sights and other wares in Gladstone since 1892.

The PDC took Marble's time-tested method of making sights by hand and automated the process.

"Automating the assembly of gun sights was a complicated task requiring the handling of several small parts and automatically assembling them into a flip-up rear gun sight," said Eric Becks, one of the PDC's engineering project managers.

Next, the various parts were made using CNC equipment and a rapid prototyper that "prints" plastic parts directly from the computer without first needing to make an expensive mold.

The LSSU PDC was able to assemble the prototype using an industrial programmable logic controller that receives information from various sensors to detect that the gun sight parts are where they should be in the assembly process.

The program then drives motors, actuators and a rotary table.

A touch screen display allows the operator to control the action.

"This machine is awesome," said Marble Arms plant manager John Thomas. "It is really helping us out."

The new piece of equipment is allowing the manufacturer to pursue other contracts that were not previously possible.

"All of our parts are very small and tedious to work with," said Marble Arms President Craig Lauerman. "Being able to automate our process has saved us labor costs but also has prevented potential carpal tunnel issues and fatigue."

While some may cringe at the thought of losing jobs due to automation, this project had the opposite effect.

"Since this was a new project, we did not replace anyone in our assembly area," Lauerman said. "As a matter of fact, the assembly machine that our employees call SASA (semi-auto sight assembler) has allowed us to price the part competitively so that when we received the order we were able to hire four other machine operators to machine the component parts. Some people state that automation eliminates jobs, but in our case it has given us the opportunity to expand our business and hire new employees in other supporting areas."

Schultz worked with Marble Arms to develop a business plan to present to Northern Initiatives for funding.

Northern Initiatives is a private, nonprofit community development corporation that provides rural entrepreneurs - from start-ups to established businesses - with access to capital, information and markets.

Its goal is to keep rural Michigan a viable and valuable participant in the economy.

The PDC use of facilities and equipment through LSSU's College of Engineering, Technology and Economic Development, along with a portion of the Product Commercialization and Manufacturing Center grant awarded to the PDC by the Michigan Initiative for Innovation and Entrepreneurism, and combined with funding from Northern Initiatives, made the project possible.

"This is a success story that shows how organizations like SBDTC connect manufacturing businesses with the educational community to bring more business to the UP and employ more people," Lauerman said. "We now are working with the LSSU PDC to automate another high-volume part that mates two small components together. We assemble 250,000 of these parts every year."

"This sort of project, that engages our engineering students in real-world development while making an economic impact, is exactly what the LSSU PDC is all about," said Becks. "Our PDC student workers can graduate and point to a list of the real engineering experiences that they’ve gained while completing their studies at LSSU."

Gun sights have been the most enduring of Marble Arms' products.

The company has produced knives, axes, compasses, matchboxes, scopes and more, but gun sights have been its backbone for more than a century.

Today it has an impressive line-up of traditional and modern sights for most American gun makers.

Find out more about Marble Arms at marblearms.com

************************** Pictured: Engineering student and PDC worker Steve Solack of Marine City secures Marble Arms' automated assembly equipment in a trailer that will deliver it from Sault Ste. Marie to Gladstone.