Krmpotich to run for NDP in Sault byelection

Ward 6 councillor says steelworkers and their pensions, protecting the vulnerable, are his priorities
0
Jan 25, 2017 10:09 PM By: Darren Taylor 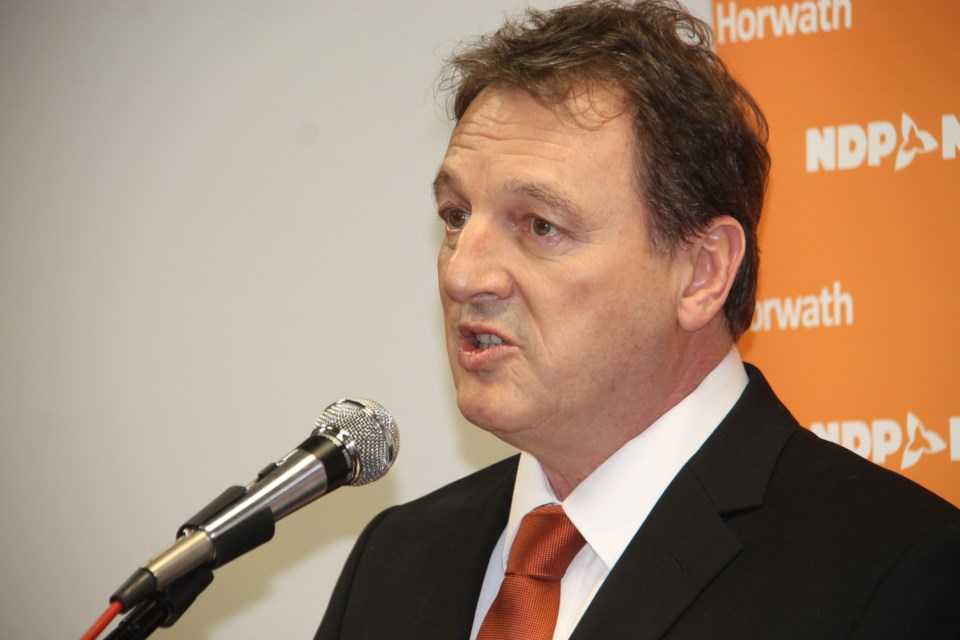 Ward 6 city councillor Joe Krmpotich has been acclaimed as the NDP’s candidate in the yet-to-be-called provincial byelection for Sault Ste. Marie.

“I’m deeply concerned about the future of Sault Ste. Marie and how the direction of the provincial government is affecting the most vulnerable in our society,” Krmpotich told the local party faithful Wednesday.

“My passion is to help people,” Krmpotich told SooToday.

“3,000 jobs at Essar Steel Algoma and the thousands of pensioners who are dependent on their pensions, and ensuring that’s there,” Krmpotich said, when asked what his primary concern is as he begins to prepare for the byelection.

Ontario NDP leader Andrea Horwath was present for the meeting.

“I come from a steel town too (Hamilton)…and I’ve watched the devastation that’s happened when we’ve lost thousands of steel jobs and we have a number of pensioners who are very, very concerned about their pensions,” Horwath said.

“A good job really helps fill the rest of your life, and with good jobs you keep your young people here, in the north…the government of Ontario that we have now doesn’t acknowledge or recognize or make policy based on the realities that are facing communities in the north.”

Krmpotich is the second city councillor to be nominated by one of the three major parties before the byelection.

Ross Romano, Krmpotich’s Ward 6 wardmate, was nominated to run for the Progressive Conservatives in November.

A third city councillor, Matthew Shoemaker of Ward 3, is said to be considering a run for the Liberals.

A byelection for the Sault Ste. Marie riding must be called within six months after that date.

NDP leader Horwath will be meeting with local stakeholders Thursday, including the Sault Ste. Marie Chamber of Commerce.

Speaking to SooToday after Wednesday’s nomination meeting, Horwath said “postsecondary education in Ontario is at the bottom of the barrel in terms of per student funding in Canada…what the government’s not putting into postsecondary education, the universities and colleges have to make up with higher tuition fees.”

Horwath said the government need to spend more on students and less on postsecondary executive salaries.

Horwath said a complete NDP election platform will be unveiled after a party convention in April and as the next general election approaches.

The next general election must be held in Ontario on or before June 7, 2018.

“I am thrilled to have Joe carrying the NDP banner as we head into what will most certainly be a very competitive byelection,” said Horwath at the meeting. “Joe’s dedication to his community, his eagerness to serve, and his willingness to listen to all points of view and engage with anyone working to make life better for the people of Sault Ste. Marie are just a few of the qualities that will make him an excellent representative for this community.”

Joe is committed to making government about people again – so it actually works for the residents of Sault Ste. Marie. He’s a champion of education, health care and seniors care - because he believes in opportunities and security for everyone.

“Too many Ontarians are struggling to make ends meet and it’s no different here in the Sault. Hydro costs just keep going up, wages are flat, and more and more people are finding themselves trapped in part time jobs that don’t pay enough and don’t have benefits,” said Krmpotich after securing the NDP nomination. “Kathleen Wynne isn’t the premier she promised to be, and Patrick Brown will only make things worse.  I know we can do better. We have to do better if we are going to provide the next generation the opportunity to live, work, and raise a family here in Sault Ste. Marie.”

Joe Krmpotich was born, raised, and educated in Sault Ste. Marie. As a parent, city councillor and former United Way chair, Joe cares passionately about the Sault, and is committed to building a better future for his community.