The plight of Kashechewan residents is the fault of Canada's Indian and Northern Affairs Minister Andy Scott, said a resident escorting 24 evacuees to the Sault today.
Nov 2, 2005 8:11 PM By: Carol Martin 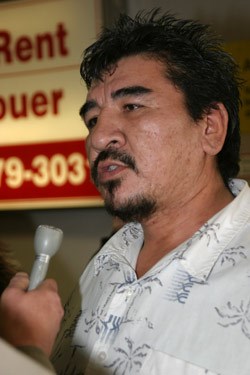 The plight of Kashechewan residents is the fault of Canada's Indian and Northern Affairs Minister Andy Scott, said a resident escorting 24 evacuees to the Sault today.

"We declared a state of emergency on October 14 and nothing was done about it," Tommy Koosees (shown) told reporters at Sault Ste. Marie Airport. "There was absolutely no response for eight days."

Koosees angrily condemned the Liberal government's handling of the situation in Kashechewan, saying that Andy Scott must be replaced for it.

The first Dash 8 from Air Creebec carrying 24 Kashechewan evacuees landed here today at 2:10 p.m. and Koosees was on the plane as an escort for his fellow community members.

View photo gallery for this story

The Kashechewan resident left his home community at 8 a.m. and expects to be back there by 8 p.m. today to keep watch over his house.

Koosees said he felt very bitter about having voted for a government that did nothing to help his community in its time of need.

Eight of them stayed in Sudbury when the flight stopped there so Ontario's Emergency Medical Assistance Team could assess the condition of the evacuees.

Terri Lynn Coulis, co-manager of the Sault Ste. Marie Indian Friendship Centre's interim management team said that one person was kept in Sudbury as a result of the Emergency Medical Assistance Team's assessment.

She also said that all evacuees coming into the Sault would be registered and processed today.

"Tomorrow morning, when we have a better idea of who we have and what their needs are, we'll be meeting with all the aboriginal associations and the two First Nations," said Coulis.

Coulis was part of a sizeable contingent of Red Cross volunteers, Indian Friendship Centre and City representatives and news media who greeted the first of 106 evacuees from Kashechewan who are expected to come to Sault Ste. Marie.

"It's important that they see some friendly faces when they get off the plane," Coulis said. "We want to determine their needs and wants and how we can help them to make the transition easier."

A Cree translator originally from Moose Factory was on hand with representatives from the Indian Friendship Centre.

The translator, Lucy Sutherland, was the second person (after a Red Cross volunteer) to board the Air CreeBec Dash 8 when its engines wound down and the door opened.

A few minutes later, she led the deplaning of the first Kashechewan evacuees to arrive in the Sault.

Sutherland planned to make herself available at the airport until the three flights expected to land in the Sault had safely arrived and all evacuees had boarded donated Sault Transit buses for town.

After processing at the airport, evacuees were bussed to what could be their home for as much as two months - the Best Western on Great Northern Road.

Coulais said that another translator and two nurse practitioners are ready and waiting for evacuees to arrive at the hotel.

She added that a trust account for Kashechewan evacuees was opened at HSBC Bank on Queen Street and anyone wanting to make a donation need only visit the bank and inform a teller.

"They've been sending them out to Ottawa, Cochrane, Sudbury and now the Sault," he said. "It's going smoothly and everyone is calm and efficient."

He said he's based out of Timmins with Air Creebec and has been flying water up to and people out of Kashechewan for the past few weeks.

Problems with the community’s water supply have been going on for some time, said Anishinabek Nation Grand Council Chief John Beaucage.

"Kashechewan citizens were ignored in the original selection by federal officials of their community [water treatment] site and the subsequent construction of a system that permits raw sewage to flow directly into the drinking water supply," said Beaucage in a media media release earlier this week.

He said that the federal government has ignored First Nations peoples' concerns about the lack of regulations or standards for drinking water quality in First Nations communities for too long, and that it has become a life-threatening situation in Kashechewan and other communities.

View photo gallery for this story