When Canon introduced its PowerShot SX110 IS in August of last year, it described the camera with face-tracking technology and optical image stabilization as perfect for "everything from school sports days to family holidays." For Sault Ste.
Sep 13, 2009 6:05 AM By: David Helwig 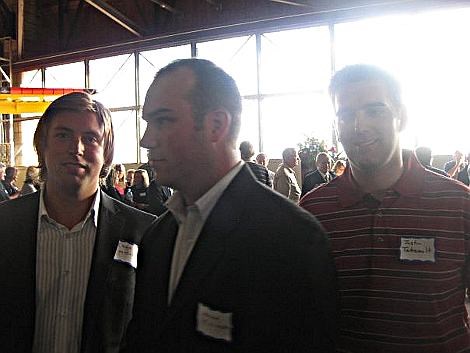 When Canon introduced its PowerShot SX110 IS in August of last year, it described the camera with face-tracking technology and optical image stabilization as perfect for "everything from school sports days to family holidays."

For Sault Ste. Marie's Justin Tetreault, the superzoom gizmo was also the perfect thing to politically embarrass the prime minister of Canada.

Tetreault's now-famous video of Stephen Harper's comments to an invitation-only gathering at the Canadian Bushplane Heritage Centre made national television newscasts, with Liberal Leader Michael Ignatieff saying it revealed a hidden side of the Conservative prime minister that voters need to see. Across Canada, political pundits are talking both about the video and Tetreault.

Some are painting the sports-loving University of Toronto law student and SooToday.com editorialist as a national hero.

Others see him as an ill-mannered boor who's just earned himself a lifetime ban from polite society.

Tetreault (shown, right, in this snapshot taken at the private Harper reception on September 2] is not remotely interested in this kind of attention.

"I should not be the story here," he insists to SooToday.com. "The comments made by Stephen Harper showing his unwillingness to work with other parties and his disdain for public institutions like the judiciary should be the story."

"Any attempt to make me the story," Tetreault says, "...is spin to distract from the fact that there are two sides to Stephen Harper: a public side and a more negative private side."

But whether or not he approves, the former northern coordinator of the Ontario Young Liberals has become a sidebar to a national news story.

"Justin Tetreault, 24, is being hailed as a hero by Liberals," writes the Globe and Mail's Jane Taber.

"Someone should give Justin Tetreault - who filmed Harper's speech in the Soo and who used to blog as the Northern Ontario Liberal - the Order of Canada," adds Toronto blogger M.J. Murphy. "He may have saved his nation from four more years of Conservative rule."

On the other hand, fellow SooToday.com editorialists David Root and Mac Headrick are critical of Tetreault.

"As l see it the recording of Mr. Harper’s remarks was disturbing," writes Headrick. "The local Liberal Party does not need or benefit from its younger representatives receiving publicity for videotaping private political events of the opposition. In a very tight political race the Liberals will need every vote they can get. They shouldn’t be doing things that may result in turning off support or inspiring the opposition. Both these scenarios benefit the sitting member," Headrick says.

"Quite disappointing, Justin," adds Root. "It doesn't really matter what else Harper may have said. What you did was despicable and dishonest."

As for members of the local Conservative guard, privately they are mad as a box of cut snakes at their former Liberal pal, whose long-time friendship with Conservative Riding Association President Josh Pringle now appears to be irreparably damaged, according to friends.

As yet undetermined is the extent of damage to attempts to draw local Liberals into the campaign of Mayor John Rowswell, the local Conservative candidate, in a kind of Anybody-But-Tony-Martin movement.

Tetreault was one of numerous local Grits allowed to meet the prime minister here.

Tetreault says he was invited by Pringle.

"I brought a camera hoping to get a picture with the prime minister. I have pictures with every living prime minister but Kim Campbell. After listening to the speech again when I got home, and being disturbed by his comments, I shared it with some friends, some of whom were also Liberals.

"I didn't go to the meeting with the intention of taping the prime minister. I'm a political nerd and just wanted to meet him. When he started talking. I thought a tape of his speech would be a good keepsake in case I did not get a picture. Everyone there knew I am a Liberal. I was not hiding. It was not a video camera hidden in a briefcase. I was out in open in plain view and would have stopped if someone asked me to."

Did the Conservatives approach Tetreault to extend the invite, or did Tetreault angle for it?

Ted Brooks, a local Conservative who helped with arrangements for Harper's visit, says that Tetreault approached Pringle to get added to the list, and promised to behave.

Tetreault's response to SooToday.com on that point?

"I'm not going to add anything to the answer I just gave. The story is not about me. It's about Harper."

Michael Ignatieff agrees: "This in-camera speech by Mr. Harper has settled once and for all his character as a Conservative leader, but also has revealed the true values: the spiteful attitude towards institutions, spite towards Canadians who are helping other Canadians, spite for our institutions."

"There have always been two Harpers. The real Harper always comes out when he thinks he can’t be heard," Ignatieff told reporters in Montreal.

Another theory is offered by the Canadian Sentinel blog: "Liberal spy Tetreault doesn't realize that he's been used. He's been manipulated. His simple, predictable mentality has apparently been harnessed by Conservative strategists as a tool of political warfare, turned against his own guys.

"Really, he wasn't just a well-known Liberal/Ignatieff operative; he was actually deliberately invited by the Conservative Party, via a local official.

"What does that logically tell you? Would the Tories knowingly invite a partisan Liberal operative to a private, "hush-hush" speech if they didn't want anyone to know what Harper was going to say?"

In any case, SooToday.com readers are pretty well split on Tetreault's conduct.

At time of writing (5 a.m. Sunday) 34 percent of 846 respondents considered his videography to be totally appropriate, compared to 40 percent who thought it grossly inappropriate. Twenty-six percent of our readers reported feeling that Tetreault has been a little rude felt they were okay with that.

Tonight, Tetreault was adding some new remarks to his SooToday.com blog: "The only reason it is an issue is because the prime minister messed up. He said things that he probably shouldn't have. He revealed his true agenda and feelings and people are trying to spin and make it about me to distract from the fact that Harper showed incredible contempt for Canadians and Canadian institutions."