At 4:30 this afternoon, City Council will start to paw through the 300-plus pages in the thick binder that EZ Rock's John Campbell is holding in our photograph.
Apr 23, 2003 11:41 AM By: David Helwig 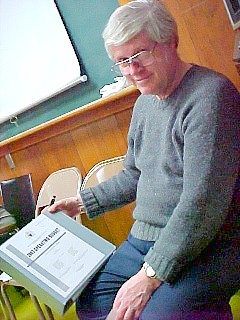 At 4:30 this afternoon, City Council will start to paw through the 300-plus pages in the thick binder that EZ Rock's John Campbell is holding in our photograph.

The following is the full text of a letter that Chief Administrative Officer Joe Fratesi wrote to City Council, explaining the 2003 City Budget, as prepared by his staff:

We are very pleased to submit to you the 2003 municipal budget which has been prepared by Bill Freiburger, commissioner of Finance and Treasurer and Scott McLellan, our Manager of Budgets.

This budget in fact represents the work of the Senior Management Team over the last several months.

It was prepared in accordance with instructions given to each department that there would be no increases in 2003 over 2002 allocations, save and except for items beyond the control of the individual departments such as negotiated and other wage increases, benefit cost increases, increased insurance costs, etc.

These latter items were adjusted on an annualization basis by Finance staff.

The Municipal Corporation has successfully used this global allocation approach to budgeting for several years now.

The effect of this approach freezes all expenditures, save and except those over which Council has little control.

(Mentioned above are only some of those expenditures.)

In addition levies from outside agencies/boards are not affected by the global approach which is to be taken by all City departments.

As in all previous budgets, any requests for new spending by departments, whether one time capital items or ongoing annual and recurring operating expenses, have been dealt with by way of "supplementary items" in the budget.

City departments have done an excellent job again this year in adhering to this approach to the budget and we thank each for all the hard work, cooperation and diligence that has gone into the preparation of this budget.

What used to happen

Years ago, City departments and outside agencies were allowed to bring forward budget proposal without targets or restrictions.

This created a huge wish list and City Council was left with the unenviable task of whittling these budgets down to a respectable levy.

This current budget process, with its initial direction set at the outset of a global approach, makes for a more realistic and manageable budget being presented to City Council in the first instance.

The budget as presented should have no real surprises for City Council in terms of requests being made as City staff and outside agencies are encouraged to bring forward during the year any proposals or other items which could in future impact expenditure levels in the budget.

Council is made aware of issues which might affect the levy at the earliest opportunity instead of waiting until budget time.

This allows Council to deal with these matters in a less constricted forum, in spite of the fact that the ultimate decision may be referred to budget.

This approach has also allowed for streamlining of the budget process.

Some things outside Council's control

As earlier mentioned, the 2003 Budget, like all previous budgets contains some components which are beyond City Council's control and which do significantly impact the end result.

These are highlighted in both the budget message which is given to City Council by the Commissioner of Finance and Treasurer, as well as in the 2003 Overview which has been prepared by the Manager of Budgets. These deserve repeating.

Like all Northern Ontario cities in the last year, Sault Ste. Marie experienced a decline in taxable property assessment totalling almost 4% and equating to a loss of revenue of over $2 million to the City.

In order to generate a levy equivalent to the 2002 levy the municipal property tax rate must increase by 3.42%.

You will note that the impact of this budget will continually be referenced in the context of the bottom line or the actual dollar impact to the average homeowner instead of referencing tax rates which may be misleading in a volatile assessment.

Much of this increase is because of the increased cost of delivering services which have been downloaded by the Province in recent years.

During this process of downloading, the Province promised to review annually the education levy and reduce education rates so as to create "room" to accommodate levy increases which municipalities were expected to experience because of their new responsibilities.

The net levy (City combined with Education) therefore increases by about 3.57%.

The Budget Overview lists those factors, which contribute to the levy increase and Council will see that it has very little discretion with respect to these items:

Against these factors, which have increased the levy, can be credited an increase in the CRF grant from the Province of $466,000.00 as well as some new recoveries expected to bring in about $125,500.00.

Of particular note is the fact that the 2003 Budget as presented does not "raid" reserves to bring the impact down.

The City's recent credit rating, done by its bond raters, commended the City for having in its Reseryes an amount that equalled or exceeded its outstanding long-term debt.

While it is always open to Council to use Reserves to bring the levy impact down, this approach simply defers to the following year the need to raise that amount of money in the levy.

It is also seen by our bond raters as a less desirable approach to our budget issues.

As a result, you will note in the Treasurer's message that he is recommending that we not increase our reliance on Reserves but that the same amount as in the past two years be allocated ($500,000).

While the Treasurer is recommending that only $250,000.00 of the 2002 surplus be used as revenue in the 2003 Budget, our goal continues to be that we completely phase out the use of surplus from a previous year as a revenue source in a current budget.

The reasoning behind this approach is that as the size of the surpluses become smaller, the likelihood of it recurring becomes smaller as well.

To read more of this document, please click here.