Jim Loney on Iraq, and treatment of Anishinaabe in Kenora

The following fundraising letter was sent by Jim Loney to friends and supporters on November 19 of this year.
Dec 11, 2005 7:44 PM By: David Helwig 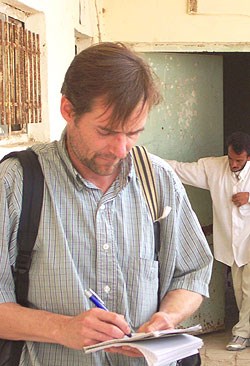 The following fundraising letter was sent by Jim Loney to friends and supporters on November 19 of this year.

Seven days later, the former Saultite and three fellow members of Christian Peacemaker Teams were abducted at gunpoint in Baghdad by a previously unknown group calling itself the Swords of Righteousness Brigade.

The kidnapping took place after the group had met with a Muslim scholar's association at Baghdad University.

In this letter, Loney describes the "nervous white noise" in his chest as he prepared to leave for the Middle East.

As I sealed the express-post envelope shut, a little tingle went off in my gut - a corporeal alarm clock signaling the next step closer to my departure for the Middle East.

And now the day has come - well almost; I leave tomorrow.

It's arriving on my doorstep in much the same way as a dental appointment.

I don't think about it very much until the examination light shines in my face and they tell me to open my mouth.

I must confess to some trepidation, a kind of nervous white noise in my chest that rises and falls but never quite disappears.

Yesterday I learned that an errant mortar (otherwise intended for the Green Zone) hit the roof of the team's apartment in Baghdad.

No one was hurt, thank God.

While my body cells cry danger! my soul feels eager - eager to briefly renew the friendships I made when I was last there (January to March 2004), to be a privileged witness to the suffering and the struggle of a people occupied by war, to be changed by the stories and the lives of those working to bring peace out of the unrelenting years of tyranny, economic sanctions and now occupation.

The current work of CPT's (Christian Peacemaker Teams) Iraq team is a complex mix of documenting torture, accompanying members of the Palestinian community in Baghdad who have no citizenship and endure xenophobic violence, and assisting an Iraqi human rights organization with the documentation of sectarian violence between Sunni and Shia.

But as it turns out I won't be in Iraq very long.

Only ten days, in fact.

Because of the shortage of people on the Hebron team, I was asked at the last minute to spend the month of December there instead of Iraq (my original plan).

Hebron was where I was first introduced to CPT in 1999. I have not been back since.

The past six years of Israeli occupation have turned Hebron's old city into a crumbling ghost town.

They say I won't recognize the place, so much it's been changed by the landscape of occupation - razor wire, check points, earthen road barriers, homes abandoned in the face of unyielding in-your-face settler tactics designed to displace Palestinian residents.

But the work, unfortunately, remains much the same: monitoring check-points; accompanying school children to and from school (a protection against Israeli army tear gas and settler provocations); responding to calls from rural families experiencing violence from Israeli settlers or security forces.

And now there's a new CPT project in the agricultural village of At Tuwani accompanying its struggle to stop the Ma' on settlement from expanding into their pasture lands.

It has been over a year now since I assumed the role of CPT Canada coordinator with Rebecca Johnson.

While most of my work is done at the phone and computer, it's also taken me three times to Kenora, Ontario.

When I mention we have a project in Kenora, some people are surprised: what's going on in Kenora, they ask.

This is an experiment for us, an attempt to get in the way of the invisible violence of normal: the disrespect, the lack of service in stores, the being ignored or harassed or abused by the police, the not-being-believed in the hospital emergency room, the stereotyping and prejudice Anishinaabe in Kenora experience every day simply because they are Anishinaabe.

So, we've put away some of our traditional direct action tools and taken up the tools of community organizing.

Our goal: to work with the white community and the churches (in partnership with a local activist group, the Anishinaabe Coalition for Peace and Justice) to take responsibility for undoing racism in Kenora.

It's a real joy and privilege to be part of this work, this gospel experiment in applied nonviolence, of imagining and making possible a world without war.

I invite you to consider sharing in this work by keeping those of us on CPT projects in your prayers and, if you're able, making a donation to help us pay the $4,000 cost of this trip.