In some communities, serious opioid intervention starts in adolescence. And experts say it works

Youth Wellness Hubs are springing up across Ontario. So far, the only one in the North is in Kenora
Jan 15, 2021 9:00 AM By: Frank Rupnik 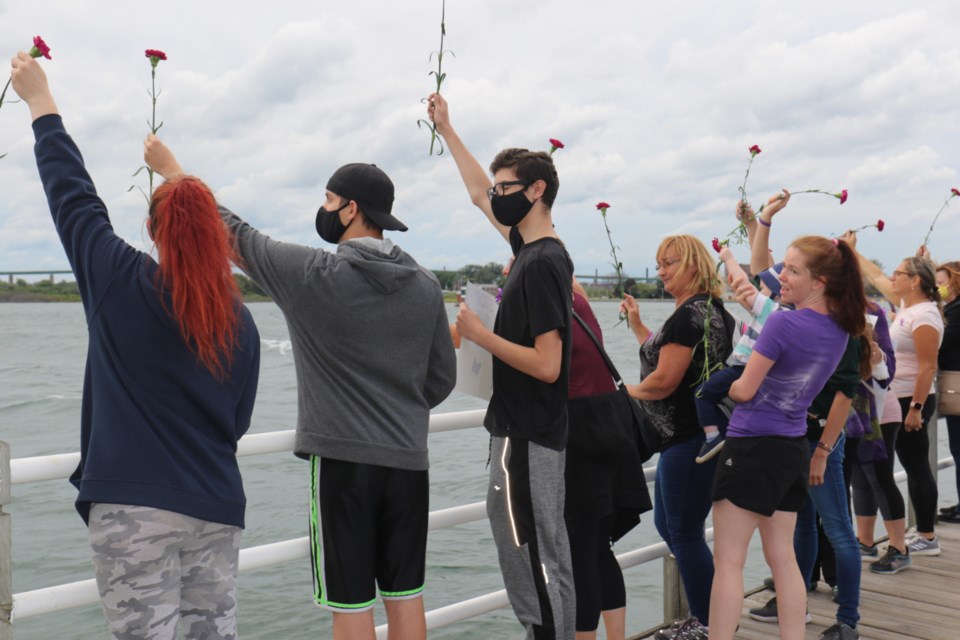 People take part in a memorial walk for victims of opioid addiction in this August, 2020 file photo. James Hopkin/SooToday

The obvious and most cost-effective solution to our city’s opioid crisis is to get to them when they’re young.

“When we think about prevention of substance use, we often think of adolescence. That’s when people start to experiment,” said Dr. Joanna Henderson of the Centre for Addiction and Mental Health. “We actually have to think of it much earlier.”

A provincial initiative, currently in its third year, zeroes in on this strategy.

Youth Wellness Hubs Ontario have been located in ten locations across the province since February 2017. These one-stop shops for youth between the ages of 12 to 25 deal with a wide range of issues that can lead to addiction if unaddressed.

Dr. Henderson helped spearhead the hubs program and she’s interested in seeing it grow. She offered her help to Sault Ste. Marie if there are people interested in developing this service model.

In November, the government announced base funding for the 10 hubs that currently exist.

“Formal expansion of hubs to other communities will require additional government investment and a site selection process would be determined as part of that. As you can imagine, regardless, I am keen to support communities in developing these services,” she said.

Dr. Henderson said a number of communities across the province have been developing similar services, but not associated with the targeted hubs funding from government.

“Growing up with an alcoholic; being abused as a child; being exposed to extraordinary stress—all of these social factors can contribute to the risk for alcohol addiction or drug abuse,” said Dr. George Koob, director of the U.S. National Institute on Alcohol Abuse and Alcoholism in a 2015 article. “And with drugs or underage drinking, the earlier you start, the greater the likelihood of having alcohol use disorder or addiction later in life.”

Dr. Henderson adds that the risk of developing addictions decreases when a young person develops a relationship with at least one caring, responsible adult and when they are engaged in healthy extra-curricular activities.

She spent a lot of time analysing how having pre-existing unaddressed or under-addressed mental health concerns increases a young person’s risk for addiction.

“We see young people who don’t have the adult supports in their lives that help them solve some of the problems they are experiencing,” she said.

That’s where the hubs come in.

They focus on a “one-stop shop model of care where a young person doesn’t need to know what’s wrong. They don’t need to do anything other than walk in and say I need to talk to someone. That’s sufficient to get care,” said Dr. Henderson.

A young person has to tell their story once and the hub system figures out what would be most helpful.

The medical maze is made more accessible and easier to navigate.

“Ultimately, we need to work differently as a system,” said Dr. Henderson.

The key is to get all the support groups, youth and parents together.

“How do we use common tools, common metrics and common pathways that young people can easily follow? How do we not duplicate our services, but complement each other,” said Dr. Henderson.

A headline on the Youth Wellness Hubs Ontario website sums it up by describing its mission as providing the right services, at the right time in the right place.

Mental health issues and addictions are usually intimately related and need to be treated that way.

“What I hear consistently from young people is they don’t divide themselves up into packages. It’s important that we think about young people’s health and wellness overall,” said Henderson.

Instilling overall wellness is what our education system aims for each day. Steering students away from substance use is part of the curriculum.

“It’s too late to wait until high school,” said Algoma District School Board superintendent Joe Maurice. “There are students who by high school have already started.”

Maurice described the approach schools take to teaching about the perils of substance abuse as proactive. At one time, the shock approach to education was more prevalent and while there’s still a place for that, it’s less of a focus.

Maurice believes substance use has been steady over the last few years, with alcohol remaining one of the higher used drugs. However, he adds that vaping is something that has really exploded.

COVID-19 has thrown a big curve at students and educators in all matters, including anti-drug messaging.

Student-led rallies, in-person presentations by police and other outside experts are on hold and may have to take on a more virtual approach.

But while schools are an important piece of the puzzle, they can’t do it all, said Maurice.

It’s really a community issue,” he said. “While we can do things in school, we can’t be alone. We only have the kids for so much of the day.”

The board held an information evening for parents on the topic of drug use. Questions about, prevalence, signs to look for and how to get help were discussed.

The plan was to have more, but COVID put that on hold.

“It’s something we want to come back to because we did get some really good feedback,” said Maurice.

He said education is important for students and parents.

“If I was a parent, who’s never been involved in drugs, I might not know what to look for,” said Maurice.

The only Youth Wellness Hub in Northern Ontario is located in Kenora and it has recently began working together with the local school board.

It drives home the message of tackling addiction issues before they take root by addressing overall youth mental health early, making the process simple and responsive to the needs of youth.

About the Author: Frank Rupnik