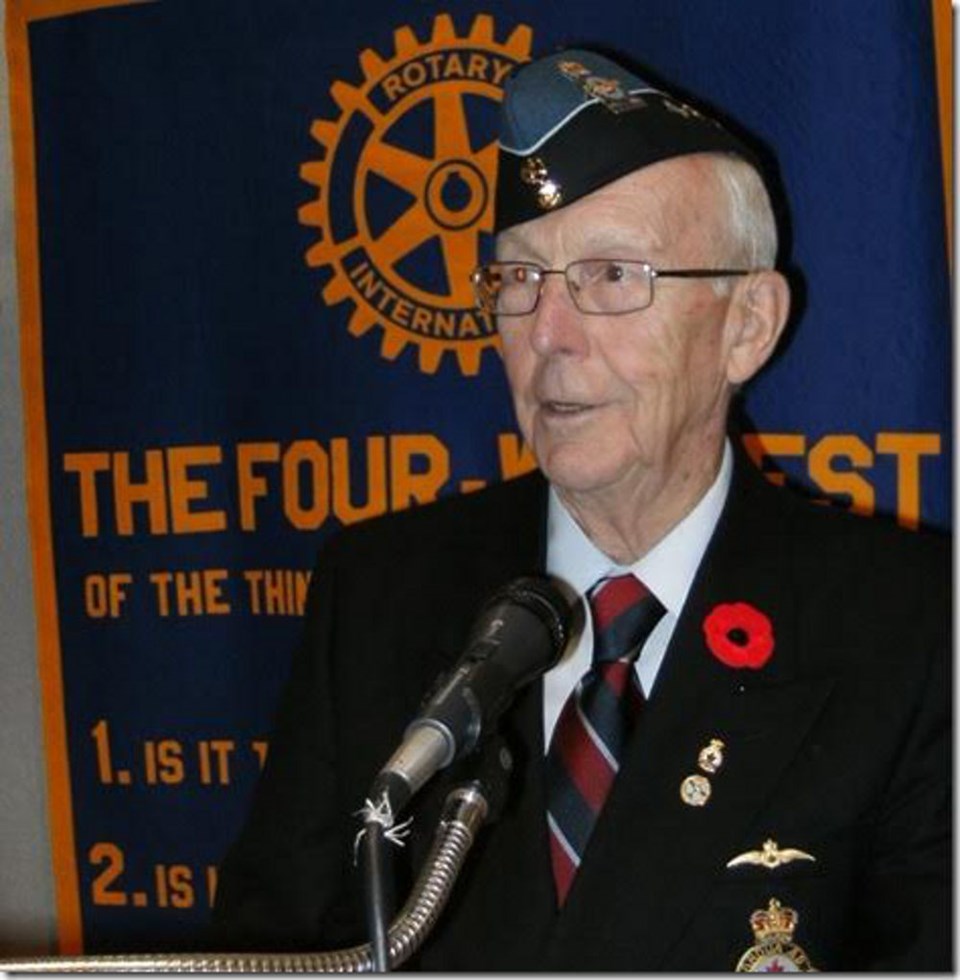 Harold Soderlund is an extraordinary man.

At 94, Soderlund stands erect, well-dressed and dignified, his eyes bright, his voice robust, his speech articulate, his mind and memory clear.

Soderlund spoke with SooToday at his upscale, immaculate east end Sault Ste. Marie home last week to share his memories of being a Canadian airman, shot down and taken prisoner in the Second World War.

Soderlund survived being shot down by an enemy aircraft, floating for two days in the sea after a hospital ship passed him by, eventually captured by the enemy and transported by plane, rail and truck from one detention area to another, poorly fed and always under the watchful eye of his captors before finally being liberated and returning home to Canada.

Through it all, he said he kept focusing on staying alive, not cracking under the pressure of being far from home and in danger, wondering if he would see his family or friends again.

"I consider myself fortunate that I survived, able to come back to Canada, and Canada has been very good to me," Soderlund said.

Soderlund was born on a farm near Sturgis, Saskatchewan in 1921, the son of Swedish immigrants.

When war broke out in 1939 (not long after he finished high school), Soderlund left the farm and joined the Royal Canadian Air Force, in which he initially served as an aircraft mechanic.

Ground crew members were occasionally allowed to fly as passengers on Air Force planes, and after experiencing the thrill of flight, he seized the opportunity to become an officer and a trained  pilot.

After gaining experience flying several different types of aircraft here in Canada, he was eventually posted overseas to England in early 1943, where he received training on the Bristol Beaufighter, an impressive, heavily armed, twin-engined day and night fighter manned with a pilot and navigator/gunner.

"It was a sturdy plane," Soderlund recalled.

In January 1944, Soderlund was posted to 603 City of Edinburgh Squadron, flying out of Gambut aerodrome in Libya.

By that time, the Allies had pushed enemy forces out of North Africa, and the Germans were evacuating Crete (which they had occupied since 1941) by sea and air, and it was the squadron's mission to attack German facilities and shipping in the Aegean Sea.

The Allies had already invaded Italy after the fall of Mussolini's Fascist regime, with the main invasion of Nazi-occupied Europe to come in June 1944 at Normandy.

"The reason for our being in that area was to make the enemy believe we were going to invade through the Balkans," Soderlund said.

He recalled attacking an enemy ship with rockets fired from his plane, then pulling away to avoid being hit by enemy anti-aircraft guns.

"I didn't go back to look (to see if the ship had sunk), but I know that particular convoy suffered severely and was later destroyed by Allied bombers."

Knowing that he was fighting an evil Nazi regime, did Soderlund feel a certain sense of gratification as he attacked the enemy?

"I never did," he replied succinctly, describing himself as a man who did his duty for Canada, opposed to any glorification of war.

For Soderlund and his navigator, Sergeant Ian Nichol, there were a couple of close calls, experiencing things not taught in flight training.

One involved his Beaufighter being struck with an enemy bullet in the fuselage behind the navigator, another involved a narrow escape from crashing into the sea after his plane's engine stalled.

On the night of August 30, 1944, Soderlund was on patrol over the Aegean Sea north of Crete.

"All of a sudden I saw the silhouette of a Junkers 52 (an easily recognized, three-engined German plane, used to transport troops and/or supplies)."

"I pressed the cannon-firing buttons but I don't think I hit him," Soderlund said.

"The next thing that happened was that I nearly collided with a second Junkers 52…I turned to get behind him (to attack) and then bullets battered into my aircraft and it disabled my port engine."

Soderlund's Beaufighter began to descend for a crash-landing on the surface of the Aegean Sea.

"I felt a bump at the back of the aircraft, that was the tail wheel touching the water, and in a few seconds the plane slid under the water…(before that) I hit my head on the windscreen but I didn't get knocked out, I grabbed the escape hatch lever overhead and climbed out onto the wing and into the water, and we inflated our Mae Wests (a nickname for inflatable life preservers)."

"So there we were (Soderlund and his navigator Ian Nichol, who was uninjured), both in the water, but the sea was calm and warm."

"The plane was supposed to be equipped with a two-man dinghy, but in the moonlight I saw a square package floating, which was a one-man dinghy, I pulled it open and we climbed onto that…Ian sat on the back and I sat on the front, my legs dangling in the water."

"We saw a Swedish hospital ship about a mile away and we tried to signal it with a little light we had, but they didn't see us."

"We realized it was gone, and we accepted the situation we were in."

The two men spent two days in that helpless state before being picked up by a German patrol boat.

"We were now prisoners of war."

For Soderlund, a long process now began which involved being transported by the German army from one place of detention to another on the European continent.

After being captured, Soderlund was taken from Crete to Athens aboard a Junkers 52 with a group of German soldiers.

He was then placed aboard a train bound for Salonika, Greece with other prisoners.

Soderlund made an escape attempt from that train, but a shout from a Russian prisoner alerted a German guard, who clicked his rifle bolt.

Fortunately, not a shot was fired.

The Russian shouted, Soderlund explained, because the group of prisoners had been threatened if one prisoner escaped, all of the rest would be shot.

"I didn't realize that at the time, so it turned out well that I didn't escape."

From there, Soderlund was transported by truck to an airfield in Bulgaria.

The airfield was attacked by German planes which had been captured and flown by Romanian pilots (Romania had switched sides by late summer 1944, from being a German ally to fighting against the Third Reich).

Soderlund was then taken by plane to Yugoslavia, then put aboard a passenger train to Budapest, Hungary.

Another train then took him to an interrogation centre for captured Allied airmen in Frankfurt, where he was warned that because he had no identification papers with him, he could be turned over to the brutal Gestapo.

Fortunately, Soderlund was spared and instead sent by train to Stalag Luft 3 (near Berlin) in early October 1944, about a month after being shot down over the Aegean Sea.

It was there Soderlund would remain until the POW camp was liberated by the Soviet Red Army when Germany surrendered in May 1945.

About two weeks passed before the Soviets transferred Soderlund and other liberated Western POWs over to the U.S. and British forces in Germany.

There were only cold water showers at the POW camp, and straw mattresses on wooden slats for beds.

Food consisted of what Soderlund describes as "a dark, heavy bread and thin soup once a day…the monthly Red Cross parcels for POWs had spam, powdered milk, cheese, crackers and chocolate, we looked forward to them."

"I accepted the situation as it was," Soderlund said, adding that was the mindset he had from the time he was shot down and captured until he safely returned to Canada after the war.

"Strangely enough, I really didn't think about the future, I just thought about what was happening at the time."

Soderlund's steely, determined instinct to survive was, tragically, not shared by all POWs.

After being captured, he was separated from Ian Nichol, his navigator, but Soderlund later learned of his fate.

"It (air combat and capture by the enemy) must have been more of a traumatic experience for him then it was for me."

"I was in control of the aircraft but I think he sat there (in the navigator's seat) in terror on many occasions."

"It affected him to the point where he didn't even recognize his parents."

"His mother wrote me and asked what had happened and I told her about the experience (being shot down and captured)."

Nichol married after the war, and after Soderlund wrote about his own experience for a website dedicated to Second World War Allied aircrews, Nichol's daughter contacted Soderlund.

He was informed Nichol had died after the war on a park bench, an alcoholic.

"That's what war can do to people, terrible things," Soderlund said, a haunted look coming over his face, his eyes watering and his lips slightly quivering for a few seconds.

In contrast, Soderlund's face beamed with joy and he raised his arms in jubilation as he described how he felt upon finally being handed over to American troops in 1945.

Soderlund went silent again for a few seconds before describing his postwar life.

He was flown to Bournemouth, England before travelling home to Canada by ship to Halifax.

After the war, he returned to Saskatchewan where he attended university and studied geological engineering.

The couple moved to Northern Ontario, and Soderlund eventually settled in Wawa where he worked in the mining industry from 1951 until his retirement in 1982.

He is a father of four (two of his sons live in the Sault) and grandfather of two.

Despite the ugliness of war, Soderlund has a message for the younger, postwar generations.

"I would say what they must be aware of is there are times when it becomes necessary to overcome evil and defend democracy and freedom, one should not forget there are occasions that can occur where it demands we take action to defend what is right and overcome evil."

The Allied powers overcame evil in the Second World War, namely the Nazi regime and the aggression of Imperial Japan, but these were clearly identifiable by their uniforms, and, as Soderlund knows, the shapes of their planes were easily spotted thanks to his air combat training.

What of the modern enemy, the evil of radicalized militant behaviour in ISIS and other groups?

What of radicalized militants and terrorists who live among civilian populations in Paris, Brussels, the U.S. and Canada, by no means easily spotted in their civilian clothing?

"This is a very different enemy, and from the atrocities they have committed, it's clear we must overcome this and the terrible philosophy they have, and the ones that have been radicalized now have to be shown there is something better," Soderlund said.

"We have to do our best to overcome them (ISIS) militarily, I think we should have carried on with the jet missions we had in the Middle East, in addition to what (Prime Minister Justin) Trudeau is proposing, to help train others to fight them."