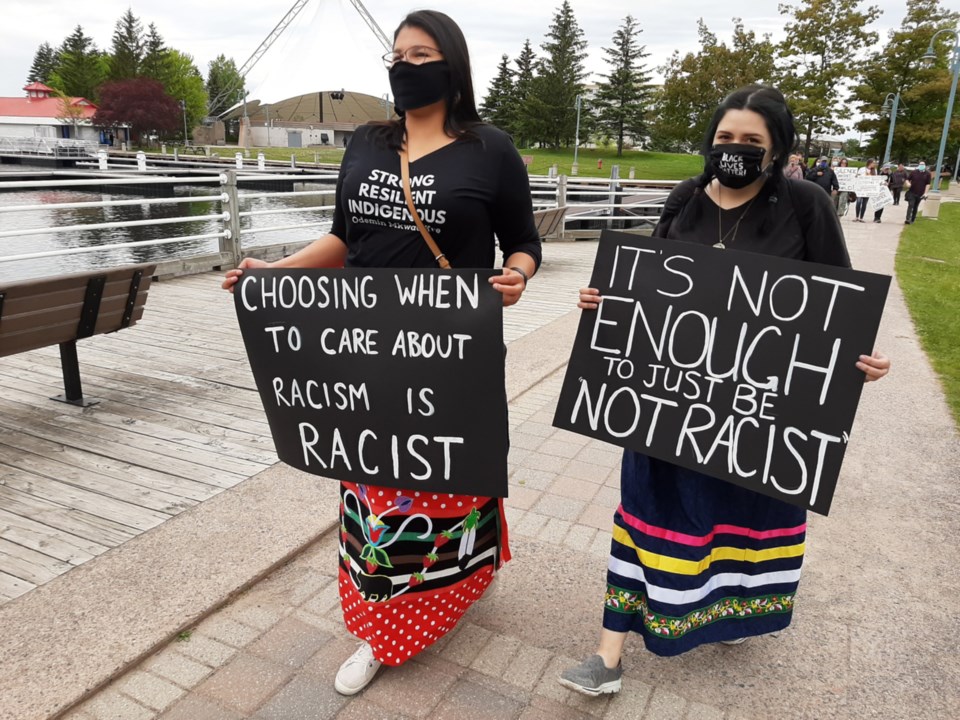 "I want to take responsibility for myself because I don't think I've done enough," Provenzano said in a preamble to a proclamation supporting Black Lives Matter.

Over the weekend, the mayor participated in online and outdoor gatherings protesting the May 25 death of George Floyd in Minneapolis.

A police officer had pinned Floyd to the pavement, handcuffed and face down, with his knee on Floyd's neck for eight minutes and 46 seconds.

Provenzano described his participation in both weekend events as "difficult."

"I don't think I've accomplished enough over the last five years to help make Sault Ste. Marie the place that we all want it to be," the Sault mayor said.

"I think there's been some failings on my part and I have fallen short."

Provanzano was speaking near the start of Monday night's City Council meeting, under an agenda item titled 'Black Lives Matter.'

"I have to take responsibility for myself if I'm going to ask other people in our community to step up and examine their own actions," he said.

"When you see what's happening in the United States, it might be easy to leave it there. But that would be a mistake. It's certainly happening to a more visible and significant degree there."

"Although we see those terrible and horrific and explicit acts, there's a more insidious reason that happened. In day-to-day lives, it might not come from a malicious place. It might just be institutional. It could be a result of internal biases that some of us don't even know that we have."

"I by no means consider myself to be racist, but I could obviously do a better job in being sensitive to the realities that a number of people in our community have lived with."

"It's pretty clear now that statements aren't enough. We need to be actioning. Although what's happening isn't happening to the same degree as in the United States, we can do better."

The following is the full text of Mayor Provenzano's proclamation:

Whereas George Floyd was killed by a police officer on May 25, 2020 in Minneapolis, Minnesota in the presence of three additional police officers, and

Whereas since George Floyd's death, there have been protests and demonstrations across the United States and in Canada in support of Black Lives Matter, and standing against police brutality, anti-Black racism  and the killing of Black people, and

Whereas racism is not limited to the United States, racism and anti-Black racism exists here in Canada and in our own community of Sault Ste. Marie, and

Whereas racism is not limited to explicitly hateful, discriminatory or prejudiced comments and actions. Racism can exist in institutional and systemic policies and practices, and

Whereas all people are created equally, and all people have the right to be treated equally in accordance with prescriptive law and the principles of natural justice, and

Whereas in order to create a free and just society, each of us have a responsibility to not only stand against racism but to actively encourage equality through the way we treat one another and by challenging the systems and practices that permit or support racism;

Now, therefore I, Christian Provenzano, as mayor of the City of Sault Ste. Marie do hereby explicitly acknowledge that racism and anti-Black racism exists in Sault Ste. Marie and that racism hurts the people it is directed towards and it weakens our larger community. I hereby call on and ask all of the residents of our community to examine our own attitudes, perspectives and conduct to determine where and how we can improve and contribute to the fight against racism and anti-Black racism so that all members of our community feel welcome, respected, included and safe and so that we can build a stronger community that is a model to others.