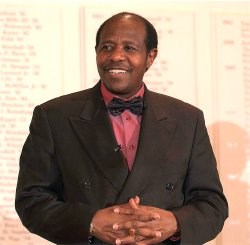 SAULT STE. MARIE, MI - (October 24) - The man who single-handedly prevented the slaughter of more than 1,200 refugees at the Mille Collines Hotel for 100 days during the Tutsi genocide in Rwanda from April to July 1994 is coming to Lake Superior State University (LSSU).

Paul Rusesabagina, whose actions inspired the Academy award nominated movie Hotel Rwanda, will present "The Real Effects of Discrimination and Public Complacency," at 6 p.m. on October 30 in LSSU's Arts Center.

Rusesabagina will also be visiting LSSU students in at least one classroom during his visit to Sault Ste. Marie.

The program is being sponsored by LSSU's Student Organization for Diversity, Issues and Intellect; Student Activities Board; Gaining Early Awareness for Undergraduate Programs (GEAR UP) and King-Chavez-Parks Visiting Professor Fund.

Rusesabagina was the interim manager of the Mille Collines when it became a place of refuge for Tutsis and moderate Hutus during the genocide.

Since 1995, he has been delivering lectures to large audiences around the world on the topic of genocide, race relations, and the importance of diversity.

"Mr. Rusesabagina's appearance is not just for the LSSU campus, but the greater community of Sault Ste. Marie," said R. Kirk Mauldin PhD, associate professor of sociology and faculty advisor for the Student Organization for Diversity (SOFD). "One of the goals of SOFD is to work with LSSU campus and the general community to better understand issues of inequality, discrimination, and global atrocities and to empower people to show what they can and should do."

"With the continued unrest and displacement in various African states and the ongoing genocide in the Darfur region of Sudan, Paul Rusesabagina's story of the slaughter of hundreds of thousands of Tutsi people in Rwanda is a story that must be heard. It is a story of how intolerance leads to violence and how violence is linked to the indifference of masses of people who fail to speak out or act to bring about change. Mr. Rusesabagina will provide students and community members alike with an unparalleled opportunity to understand the mechanisms through which these tragedies have and continue to occur," Mauldin said.

Rusesabagina, 54, is the son of farmers in central-south Rwanda.

After his formal schooling, he was educated about tourism and the hotel and catering industry while employed as office manager at Hotel Akagera in Akagera National Park.

Through the Suisse Tourist Consult, Rusesabagina was accepted into Kenya Utalii College in Nairobi in the hotel management course, which he started in early 1980 and finished in September 1984 in Switzerland.

Back from Switzerland, Rusesabagina joined Sabena Hotels and was employed as assistant general manager in the Mille Collines Hotel from October 1984 until November 1992, at which time he was promoted to general manager of the Diplomate Hotel, also in Kigali.

When the genocide began, Rusesabagina had to move back to the Mille Collines, where he stayed for almost 100 days.

In September 1996, Rusesabagina went to Belgium as a refugee.