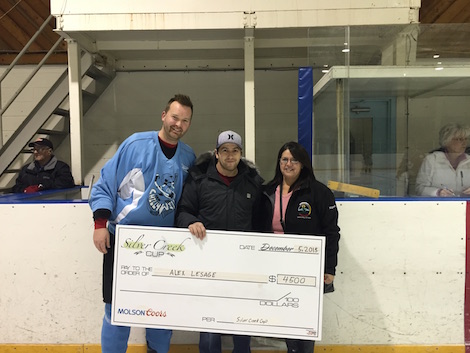 *************************‎
The 3rd Annual Silver Creek Cup presented by Molson Coors was held this past weekend at the Rankin Arena to raise money for a local family and young hockey players.

Over 250 players from 24 teams participated in the six day event which featured local players along with some visitors as far away as Cochrane who came to support the event.
Jamie Henderson, General Manager of Silver Creek described the event and the community's generosity.
'It's a special feeling to be able to give back to the communities and we're proud and humbled to have the opportunity to do so. When you put an event together and sell out and have over 250 players it just goes to show how lucky we are to live where we do‎ and have so many wonderful people who want to help others and have fun playing the game we all love!.'
'To be able to raise over $30 000 since December of 2013 in five events is something we are extremely proud of and we look forward to continuing these efforts in the future.'
The Silver Creek Cup was established in 2013 as a means to assist the community during golfs 'off season'‎.
With proceeds from this year's event along with the popular Little Caesars Winter Classic at Silver Creek, the 18 hole golf course located in Garden River have managed to raise over $30 000 the past three winters.
Proceeds have been given to family's in need, local organizations and to young hockey players in need of new equipment.
This year the Silver Creek Cup will donate $4,500 to the family of Alex Lesage, a member of the SSM Wildcats who was recently involved in a tragic car accident.
Saturday evening, prior to the finals of the men's open division, a cheque was presented to Alex's father Joe and her Grandma Ronda.
This past summer five local children were presented with new hockey equipment from Source For Sports following the Little Caesars Winter Classic.
Next summer Silver Creek will use the remaining  ‎proceeds from the Silver Creek Cup to bring young hockey players to the 'Source' once again who will be outfitted with some new equipment whom might not be otherwise able to do so for financial reasons.
The Silver Creek Cup would certainly not be possible without great community support. Silver Creek would like to thanks David White and Molson, RBC, Rico and Romina Fata and Tim Horton's, Red Velvet Foto‎ Booth, 3m Trimline, Roadhouse Bar, Superior Bakery, Source For Sports, Second Hand World and the many people who donated great prizes for the event.
Silver Creek is an 18 hole golf course located just outside Sault Ste Marie in the First Nations Community of Garden River.
To find out how your child may be chosen to receive new hockey equipment please contact Leah Boissoneau at leah@golfsilvercreek.com.
*************************‎
Reader Feedback

Directional drilling can save you thousands on new sewer lines