HIV-positive man had 'absolute disregard' for women he slept with and should go to jail, says Crown 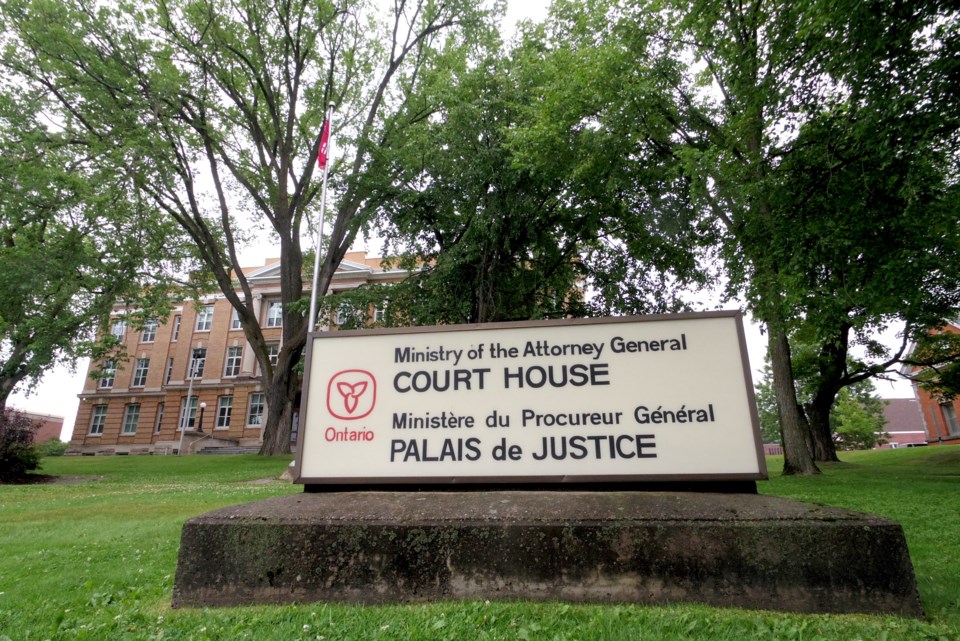 The Sault Ste. Marie Courthouse is pictured in this file photo.
Oct. 31, 2014 - the date is singed in her memory.

"Part of me died" when "to my horror and shame I read about the accused online," a local woman told a judge Friday in a powerful and emotionally-charged victim impact statement at a sentencing hearing for Nicholas Goodchild.

"That night my world changed," she said, detailing how her life exploded when she learned that the then 25-year-old man had been charged with aggravated sexual assault for failing to disclose to two women he had sex with that he was HIV positive.

He was known to have accessed dating websites, and the Sault Ste. Marie Police Service felt there might be more victims, so along with Algoma Public Heath (APH), was encouraging women who had sexual relations with him to seek medical attention.

"I went to the police to give a statement and the hospital to be tested," said the woman, one of the three complainants who testified at his trial.

She told Superior Court Justice Edward Gareau she was "in disbelief" and knew she had to tell her husband and "hurt the person I loved."

"My life as I knew it was over," she said, describing her depression, suicidal thoughts and how she "cried every day for two years."

The woman also outlined her frustration with the justice system that has taken four years to get to this point, following an "impossibly long, frustrating, demeaning trial" that left her feeling "so humiliated."

"I'm tired and weary," she said, continually fighting back tears. "I never thought I'd be so distraught over the justice system and the police service. I wish I never came forward.

"I paid a price and it wasn't worth it," said the woman, who indicated she has lost her husband and family because she has taken responsibility for her actions.

A jail sentence for Goodchild "won't make this better, won't take the pain away, but would make me feel better," she admitted.

The Crown is seeking a five-year-prison term for Goodchild, while the defence urged the judge to impose a suspended sentence with restrictive conditions.

Gareau will give his decision Nov. 19.

He found Goodchild guilty of the three aggravated sexual assault offences, which carry a maximum penalty of life behind bars, in November 2017, following a seven-day trial that took place in June and July of that year.

During the trial, Gareau heard the accused went to  Sault Area Hospital with possible pneumonia on Oct. 10, 2013, where blood tests, including HIV screening, were ordered.

Ten days later, he learned his test results indicated he was HIV positive.

The court also heard APH had previously contacted Goodchild, on Jan. 14, 2010, to inform him he had been named as a contact for a non-confirmed case of HIV.

At the sentencing hearing last week, prosecutor Dana Peterson argued that he willfully ignored public heath's repeated and extensive counselling about the risk factors and the need to advise partners of his status.

A year after he had been diagnosed, APH became aware he was not divulging his status, which resulted in a Superior Court order requiring him to disclose the names of those he had sexual contact with and to use condoms at all times, she said.

Goodchild "showed callous disregard for the integrity of these women," the assistant Crown attorney told the judge, adding that despite the health unit's efforts he didn't provide the names of the three complainants.

Peterson said there is a need for specific deterrence in this case.

"I'm not suggesting he deliberately wanted to infect the women," but "there was absolute disregard for their safety."

Goodchild had multiple partners, and the sexual activity involved multiple acts, and each increased the risk of exposure, she said.

"The only true mitigating factor in this case is his lack of a criminal record and age at the time."

Since Goodchild is a first offender, it's important that the sentence, which is solely for the purpose of deterrence, should be as short as possible, the prosecutor said.

In this case with multiple victims the sentences should be consecutive, totalling eight years would be appropriate, Peterson suggested.

Calling such a sentence "significant and crushing" to Goodchild, she said the Crown is proposing a global sentence of five years.

This prosecution and the law is not about punishing a person who is HIV positive, Peterson said.

"He repeatedly withheld information from sexual partners that is why it is a criminal offence."

Defence lawyer Jennifer Tremblay-Hall argued the court should sentence her client based on a December 2017 federal government review of the Canadian criminal justice system's response to HIV non-disclosure.

The report's conclusions outline the circumstances in which "the criminal law should not apply to persons living with HIV who have engaged in sexual activity without disclosing their status."

It provides a new understanding and approach for such an offence, which previously resulted in jail terms, she said.

She called the report a guide on how the court should proceed, suggesting "that it's not a slam dunk anymore, not one size fits all."

Tremblay-Hall said she doesn't think this new approach minimizes Goodchild's wrong doing for not disclosing his status in 2014.

She suggested Goodchild's "moral blame worthiness is on a very low level."

"He was consistently using condoms, consistently precautious," the defence said, conceding he may have been reckless, because he took away the women's consent, which is "very wrong."

Goodchild didn't have unprotected sex and wasn't engaged in high-risk conduct because he was on a dating site, she said.

Tremblay-Hall pointed to a number of mitigating factors - constant use of condoms, consistently taking his medication and no previous criminal record.

"He didn't act in a predatory manner with any of the complainants, there was no maliciousness, no intention to infect anyone, no planning."

She proposed that Goodchild receive a suspended sentence with lengthy restrictions, including strict conditions limiting his liberty for six months and a high amount of community service.

Such a sentence would address the principles of deterrence and denunciation "in light of this new approach (by the government)."

Goodchild told Gareau he was sorry and wished he hadn't made these mistakes.

"I'd like to apologize to the complainants," he said, turning his head to look at the woman who had read her victim impact statement to the court.

"I never intended this to happen to any of them."