‘He’s by himself’ says concerned man of orphaned bear 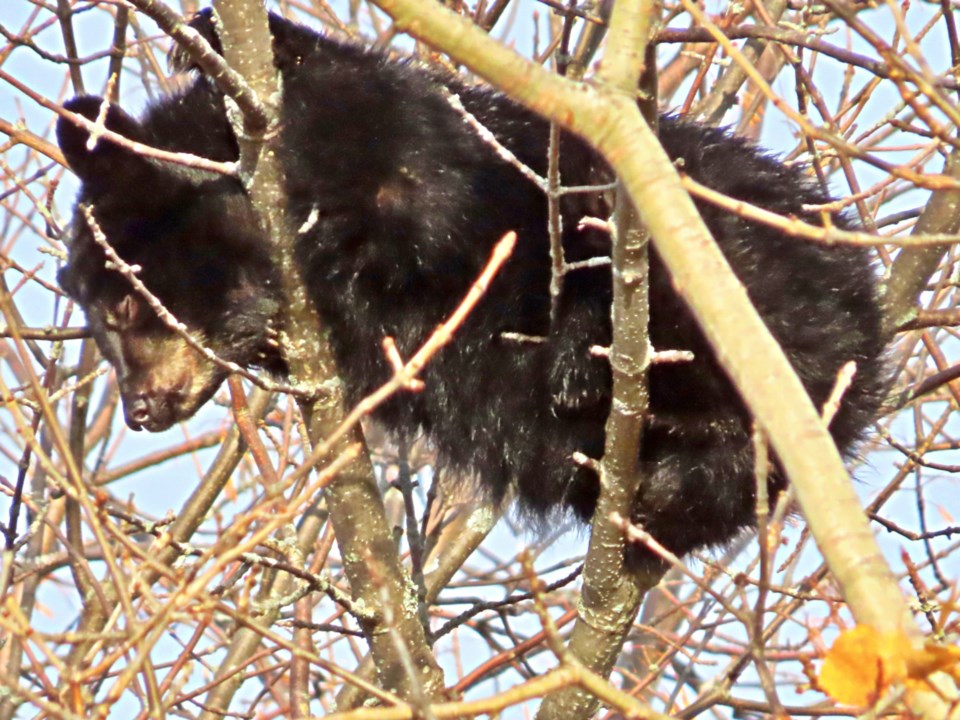 This orphaned bear has been fending for himself in Thessalon throughout October, concerned citizens hoping Ministry staff will soon come and make arrangements for him to be sent to a wildlife sanctuary. Photo supplied by Tony Ward

An orphaned bear has captured the attention (and pulled on the heartstrings) of a Thessalon retiree and other town residents.

“It was the beginning of October (when first seen). He’s just a cub and obviously something’s happened to his mother,” said Tony Ward, speaking to SooToday early Monday while bicycling, keeping one eye on the road, the other peeled for the bear.

“At first he was wandering around and eating apples and whatever else, and all this time myself and others have been calling the MNR to try and get him picked up and sent to a couple of bear rescues.”

At least two wildlife sanctuaries, one named Bear With Us, another known as Aspen Valley Wildlife Sanctuary, are indeed available, but both are situated in Muskoka, far from this neck of the woods.

“That’s part of the problem. When the MNR picks up a cub they have to drive it to, say Espanola, and meet up with someone from Bear With Us,” Ward said.

“The bear's becoming more lethargic, in the same stand of trees, and people driving by can see him. He doesn’t look like he’s starving. He’s between 30 and 40 pounds. Hopefully he’s going to den, get under a log or brush (during the soon to come winter) after eating like crazy in the fall. The hope is he’s going to do that, but he’s a first year cub so he’s never actually had to do that (without his mother). He’s by himself.”

Ward said he and others have called the Ministry of Natural Resources and Forestry (MNRF) Sault Ste. Marie District for help, but understands Ministry staff are busy with many other orphaned bear and injured animal calls at this time.

“They said they came here in the beginning of October but couldn’t find the bear, but at that time he wasn’t using trees, he was just wandering around. But now he’s in the same woodlot every day. He shouldn’t be that hard to find (if or when the MNRF makes another attempt to come to the bear’s aid).”

While wise enough not to approach the animal, Ward says he and his fellow bear lovers hope help will come in time.

“It’s heartbreaking to see him every day, and you wonder what’s going to happen to him.”

Chris Oliver, Ministry of Natural Resources and Forestry (Sault Ste. Marie District) bear management technician, in an email to SooToday Monday, wrote “lone bear cubs are quite common at this time of year. Cubs may be alone for a variety of reasons. They may simply be separated from their mother, or their mother may be injured or deceased. We tend to see them where food is readily available, such as near apple and oak trees.”

“MNRF recommends that people call the bear reporting line (1-866-514-BEAR) with the location, the size of the cub, and the length of time it was seen alone. People are reminded not to approach or feed wild animals.”