The sign on the door, and on the cross inside, says "Lest We Forget." Yet, hundreds of Saultites come and go from Memorial Gardens without ever noticing the War Memorial tucked into a little room at the base of the Queen Street tower.
Jul 21, 2002 1:00 AM By: David Helwig 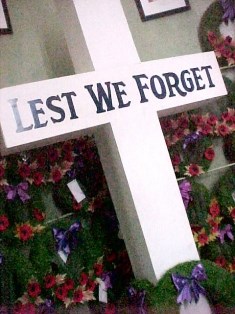 The sign on the door, and on the cross inside, says "Lest We Forget."

Yet, hundreds of Saultites come and go from Memorial Gardens without ever noticing the War Memorial tucked into a little room at the base of the Queen Street tower.

That's what the 'Memorial' in Memorial Gardens stands for.

Now, the City's Local Architectural Conservation Advisory Committee (LACAC) is asking that the entire Queen Street facade of the building be preserved and incorporated into the proposed new arena.

Their request includes the landmark Memorial Tower, as well as the room at the base of the tower containing the War Memorial, and the plaza surrounding it.

At the south end of the building, LACAC also wants a series of war memorial-themed relief sculptures and stained-glass windows preserved. The artwork represents the theme of "peace on earth and good will toward man."

(Photos of relief sculptures are grainy because the art is in a dimly lit part of the building near the rafters. They're hardly identifiable as sculptures from ice-level)

Why the building is considered important

Memorial Gardens is one of just 13 structures in Ontario included in the DoCoMoMo International Register. DoCoMoMo stands for Documentation and Conservation of examples of the Modern Movement in architecture.

"The acceptance of the unconventional design of the Memorial Gardens by the City reflects a remarkably progressive attitude for a community as remote, relatively speaking, as Sault Ste. Marie was in the 1940s," says LACAC chairman Ted Wall.

The building is a treasure-trove of historical signifiance, not least of which is Wayne Gretzky's 1977-78 season with Soo Greyhounds. Two years ago, City Council gave LACAC permission to seek a national heritage designation for the Gardens. This past March, the Historic Sites and Monuments Board of Canada advised the City that it was not prepared to do that.

"In particular, their report noted the fact that while the City of Sault Ste. Marie and LACAC brought the request forward, the municipality had not recognized the building's historic significance," Wall says.

LACAC's request to preserve parts of the original Gardens, incorporating them into the design of a new arena, will be presented to City Council on Monday as an information item.

LACAC and the City's Arena Study Review Committee are expected to have further discussions about the recommendation.

Is anything worth saving in the building where Wayne Gretzky started his hockey career? Should the War Memorial be left alone or should we build a new one? Your ideas are welcome in the News Response section on our Editorial page.