(Editor's note: be sure to read this story all the way to the bottom where you will find a link to video highlights of this game, to Brad Coccimiglio's live blog written during the game and to a full recap of the rest of the action around the 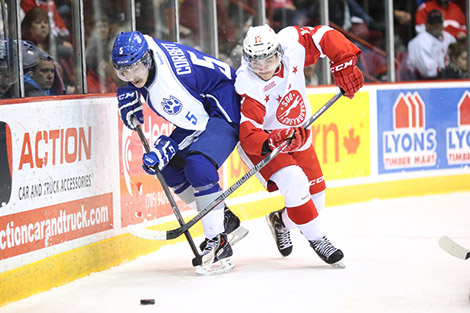 (Editor's note: be sure to read this story all the way to the bottom where you will find a link to video highlights of this game, to Brad Coccimiglio's live blog written during the game and to a full recap of the rest of the action around the OHL.)

The Soo Greyhounds continued their five-game homestand on Wednesday night as they hosted the Sudbury Wolves.

The game marked the second meeting between the two clubs this season and first since a 10-3 Greyhound victory in September. This time, the Wolves skated away with a 3-2 shootout win at the Essar Centre.

“We had a good first period and we were really in control of the game,” said Greyhounds coach Sheldon Keefe. “Sudbury raised their level of play and found another gear and we got worse as the game went on.”

The game turned into a battle of power plays as all four goals in regulation time came by way of the man-advantage. For Keefe, the Greyhounds power play was a positive in the loss but the penalty kill struggled, which included giving up a goal on a Sudbury five-on-three man advantage.

Andrew Fritsch had a goal and an assist for the Greyhounds in the loss while Darnell Nurse also scored. Goaltender Matt Murray stopped 39 shots in the game.

“He was busy,” Keefe said of Murray. “We gave up a lot and spent a lot of time in our end running around. Those were some pretty good players shooting on him too. He was really solid and obviously gave us a chance to earn the point. We’ve come to rely on him throughout the season. It seems we’ve had to rely on him a little too much of late.”

Nicholas Baptiste and Connor Crisp scored for Sudbury in regulation time while Crisp had the shootout winner.

“I’m happy about the two points but our work ethic wasn’t where it needs to be to win on a regular basis in this league,” said Wolves coach Paul Fixter. “I really wasn’t happy with the amount of turnovers. It really wasn’t a well-played game by our hockey club.”

Wolves goaltender Franky Palazzese stopped 32 shots in the win and also stopped two of three Greyhounds shooters in the shootout.

“Franky’s been good,” said Fixter of the veteran goaltender. “For the last while he’s played well. As a goaltender, your job is to give your team a chance to win and he’s done that on a regular basis the last little while.”

For a full recap of the rest of the action around the OHL, click here