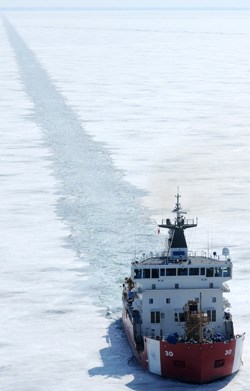 CLEVELAND, OH - (April 10) - The extensive international cooperative icebreaking efforts involving U.S. Coast Guard and Canadian icebreakers on the Great Lakes are fast coming to a close for the 2008/2009 icebreaking season.

There are two major operations conducted during the icebreaking season, Operations Coal Shovel and Taconite.

Icebreaking for Operation Taconite, encompassing Lake Superior, the St. Mary’s River and the Straits of Mackinac, Lake Michigan and northern Lake Huron, is anticipated to conclude the week of April 13.

"This season was one of the safest and most successful icebreaking seasons in many years," said Cmdr. Kevin Dunn, chief of waterways management for the Ninth U.S. Coast Guard District. "The unprecedented level of communication between industry, both governments and commercial icebreaking providers, as well as the improved reliability of our icebreaking resources, ensured we were able to meet all agreed upon Coast Guard and industry icebreaking performance standards."

In addition to providing services for industry, U.S. Coast Guard helped the U.S. Army Corps of Engineers provide flood control relief for many communities in Ohio and Michigan.

Coast Guard icebreakers cleared ice from the Grand Rivers in Ohio and Michigan, mitigating storm and flood damage there.

The U.S. Coast Guard also recently completed engineering upgrades to four of its five 140-foot icebreaking cutters, improving reliability and reducing the number of days lost due to mechanical problems by more than 50 percent, from a high of 118 days lost last season to just 63 days this season.

Also, The Coast Guard deployed an additional 140-foot icebreaker, the Thunder Bay from Rockland, Maine, to help break ice on the Great Lakes.

Thunder Bay arrived on the Great Lakes March 31 after breaking ice in the Saint Lawrence Seaway.

The deployment of the additional cutter from the Coast Guard's First District in New England enabled the Coast Guard's Ninth District to shift more icebreakers to the northern parts of the Great Lakes where greater concentrations of ice where found, while still providing resources in Lake Erie.

"It was an exceptionally safe year and the commercial ship operators should be commended for only sending out ships that were adequately powered and constructed for the difficult ice conditions often found on the Great Lakes in winter," said Capt. Lorne Thomas, chief of prevention for the Ninth Coast Guard District.

"Icebreaking on the Lakes takes a real team effort. Though we saw a reduced amount of commercial traffic probably due to the economy, we along with our international partners and commercial icebreaking resources were prepared for the worst and operationally ready for a heavy ice season that thankfully never fully materialized," said Thomas.