A former Ontario Fire Marshal — who has been denied a chance to speak tonight at council and whose opinion the mayor recently characterized as a ‘hired one’ — laid out his reasoning behind suggesting the city reconsider its pl
Nov 23, 2015 2:40 AM By: Kenneth Armstrong 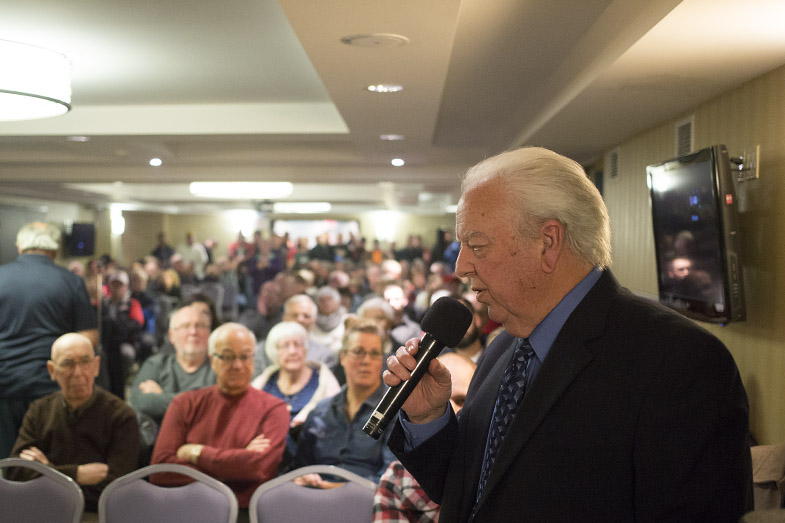 A former Ontario Fire Marshal — who has been denied a chance to speak tonight at council and whose opinion the mayor recently characterized as a ‘hired one’ — laid out his reasoning behind suggesting the city reconsider its plan to slash 20 firefighter jobs over three years.

Burke brushes off Mayor Provenzano’s recent suggestion that his opinion — outlined in a letter to mayor and council sent earlier this month — is for sale.

“My opinion has not changed, you can ask any fire chief across Ontario who have dealt with me in any capacity. I have always been an advocate of ensuring you have appropriate staffing for the safety of the firefighters, in safety of having adequate equipment,” said Burke.

Burke noted he was involved in three inquests concerning firefighter deaths which resulted in recommendations that ultimately led to greater firefighter safety.

The images he saw during the coroner’s jury at one inquest continue to haunt him.

“You could see the hand marks where the firefighter got trapped, going along the walls. He couldn’t get out and ended up running out of air.”

That inquest resulted in creation of rapid intervention teams, two firefighters at the scene of a fire trained to enter burning structures with tools to extricate a lost or unresponsive firefighter.

Another firefighter death inquest — which involved a person Burke knew personally — resulted in the requirement for fire services across the province to provide Personal Alert Safety Systems (PASS) alarms for all firefighters.

Burke is disappointed council has decided not to hear his expertise as a delegation at tonight’s meeting.

“It is discouraging when people don’t respond and they take the action anyway. To me it shows a real lack of understanding of what the fire service is and how important it is,” he said.

Sault Ste. Marie Professional Firefighters Association (SSMPFFA) president Marty Kenopic said the intention of their presentation at the October 26 city council meeting was to ask council to press the pause button on the cuts, and they have not had the opportunity to present their side to the public at large.

“We were there to defer the motion. I had prepared a speech in hopes council could defer the motion until at least the following meeting where we would be able to prepare and defend our reasoning,” said Kenopic.

Instead, council pushed through a motion to cut 20 firefighter positions through attrition over three years in a realignment of the service.

Earlier this month, Mayor Provenzano suggested the firefighters are attempting to fight city hall in the court of public opinion.

With city council denying a request to defer the decision and denying Burke an opportunity to speak at today’s council meeting, IAFF 13th District Vice President Fred LeBlanc says they are being given little choice.

“{SSMPFFA] were extremely concerned with their capabilities to do what is right for the citizens so they need to find an avenue to make sure their voices are heard,” said LeBlanc

He added, “the mayor and council have shut down in listening.”

In the town hall presentation, Burke voiced a position closely aligned to that of SSMPFFA, that he feels it is responsible for council to complete a comprehensive risk assessment before going ahead with the plan to slash 20 firefighter positions.

Five of those positions have already been cut as result of retirements within the last year.

Burke said no matter where he goes, he hears the same thing — municipalities willing to cut fire service to save money.

“I have spoken to a lot of politicians and a lot of senior-level bureaucrats and it doesn’t seem to sink in,” said Burke.

He said it was important for him to make the trip — despite his wife at home healing from a broken ankle and his young brother in hospital.

“I am passionate about this because I think it is something overlooked. It’s almost like a disease going through the fire services right now, [municipalities] trying to cut back,” said Burke.

He said those cuts are at the sake of public and firefighter safety.

“The safety of the community and the firefighters doing the job is worth the cost,” said Burke.

Neither the mayor nor any sitting city councillors were in attendance at the meeting.

Burke will spend today speaking to the SSMPFFA executive as well as the service’s platoon chiefs but said he won't attend the city council meeting.

“I’m not going to bang people over the head,” he said.

LeBlanc said the cuts have already had an effect in the service, reducing the amount of firefighters at the ready from 17 to just 14.

“When the firefighters informed me that just the other day they were down to 14 on duty, I said, ‘what happened to the three year transition we were supposed be in?’”

LeBlanc wants to see the service continue at 17 firefighters on duty and the city conduct a comprehensive risk assessment before cutting any more positions.

“You said you want a three year transition anyway. We’re not losing anything by spending a few months [doing a comprehensive risk assessment],” said LeBlanc.