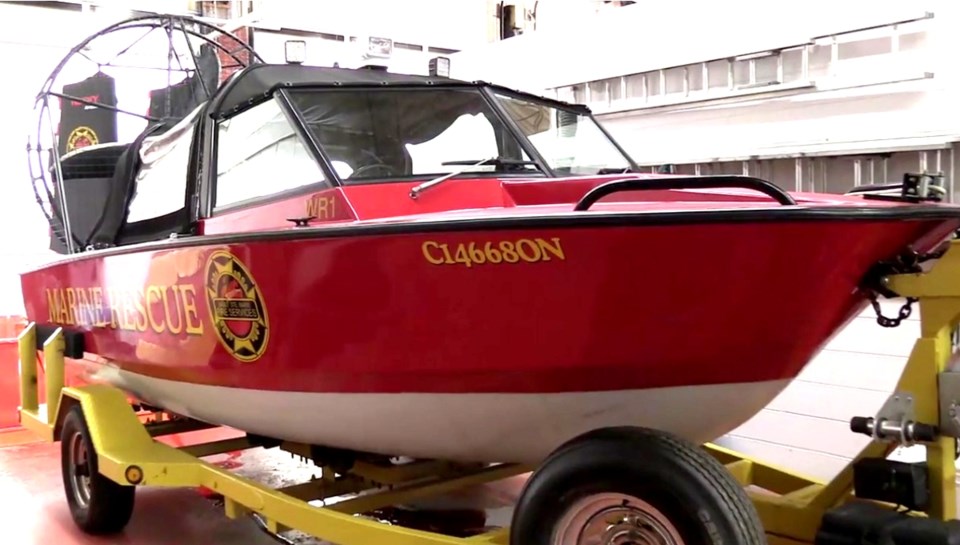 This 16-foot Husky Airboat, photographed by Local2 in 2014, is used by Sault Fire Services mostly for ice/water rescues from Pointe Des Chenes to Bell's Point.

But Fire Chief Mike Figliola says one is unfit for service and not worth fixing.

The other has suspected hull integrity issues.

Figliola says he has no money to replace his old tubs.

And really, he doesn't want to replace them.

Chief Figliola believes water-based rescues are actually outside his jurisdiction - they're the lawful responsibility of other agencies including the OPP and Coast Guard.

Figliola conceded at a city budget meeting this week that Sault Ste. Marie Fire Services is responsible for shore-based rescues.

But he wants to deep-six the idea that firefighters belong in the business of using boats to rescue people.

"While we can still continue to assist these agencies as required, we are not the primary agency for water rescue," the fire chief said.

"We believe we should no longer be, other than an assistive [shore-based] role, a marine agency."

Water Rescue 2 - the Buster B

Ward 6 Councillor Joe Krympotich grilled Chief Figliola at this week's budget meeting about Water Rescue 2, a 25-foot twin-screw boat better known as the Buster B, which can often be seen moored in the Roberta Bondar Transient Marina.

The Sault Ste. Marie Professional Firefighters believe that the Buster B recently underwent a complete overhaul on its ballasts and received two new motors.

Figliola said he declared the boat unseaworthy when he found that its two outboard motors rotated in the same direction.

"I determined that it was unfit because of the safety of the propellers," the fire chief said. "It should never have been in the water, set up the way it's set up."

That boat will be removed from service this year, he said, saving taxpayers approximately $2,500 in annual maintenance costs.

The other Sault Fire Services vessel, the 16-foot Husky Airboat shown at the top of this article, will continue to be used as needed, Figliola said, even though the integrity of its hull is under review.

In September 2012, the airboat helped the U.S. Coast Guard rescue a trio of U.S. duck hunters south of Richards Landing.

In November, 2014, the Husky was sent to Trout Lake after Matt Connors and his dog Iggi got stranded on the ice in a canoe.

"I'd have been up s—'s creek," Connors told SooToday's Kenneth Armstrong, when asked what might have happened if Sault Ste. Marie Fire Service's marine unit had not attended his emergency.

All Coast Guard vessels have onboard firefighting systems, Figliola said.

Any situation requiring on-water rescue will be handled through the OPP,  Ministry of Natural Resources, the Canadian or U.S. Coast Guards or Michigan State Police, he said.