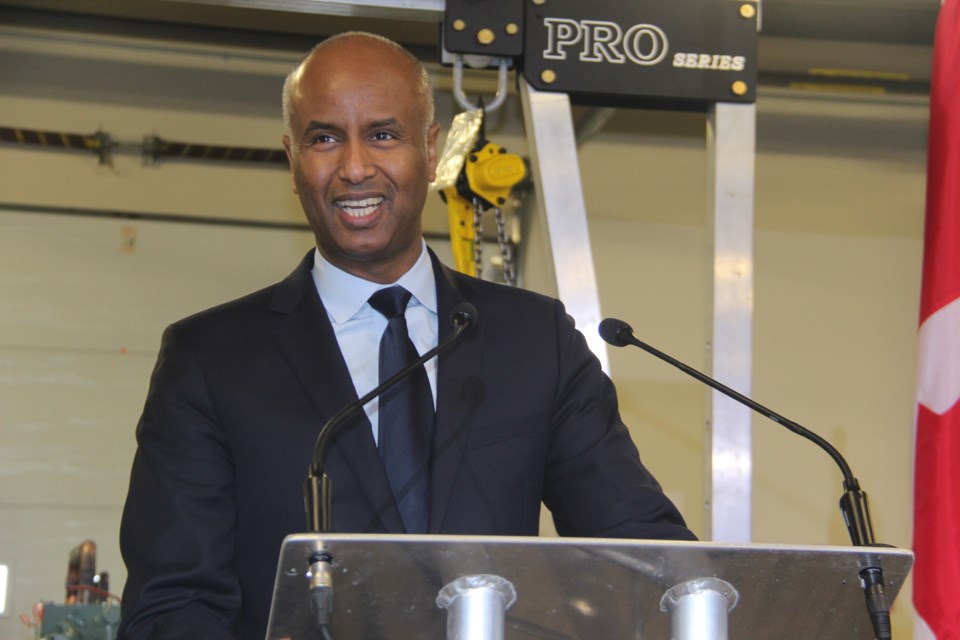 But the immigration initiative unveiled in Sudbury was clearly different from what Provenzano was expecting.

Last April, the Sault mayor had persuaded fellow mayors in Sudbury, North Bay, Timmins and Thunder Bay to press the federal and Ontario governments for a northern Ontario immigration pilot similar to one underway in Atlantic Canada.

As SooToday reported earlier this month, Provenzano had been quietly advised that no pilot could be considered for just one region of a single province.

But everything he'd been told suggested the rural/northern pilot would be for communities of 100,000 or fewer inhabitants.

The five-year initiative announced Thursday to a roomful of Cambrian College international students by Ahmed Hussen, Canada's minister of immigration, refugees and citizenship, is instead open to communities of up to 200,000 population in Ontario, Western Canada and the territories.

"Communities up to 200,000, that's not rural or remote Canada," Provenzano told SooToday.

"In all my discussions to date, I had no reason to believe that was going to be the parameter. I thought it was 100,000," he said.

"It's splitting up a lot of immigrants amongst a lot of communities. I think it's important to recognize that small cities in rural Canada need help attracting immigrants and that we have a shrinking labour force instead of a growing one."

"Frankly, I think they've gone too far in setting their ceiling at 200,000. I think it's going to make the program a lot less effective," Provenzano said.

"The kinds of workers that will be recruited through this program will depend on the local community and employers,” Minister Hussen announced. “It will be diverse, and it will be based on the regional labour market.”

The minister said the pilot program will be capped at around 3,000 workers, but the number of immigrants could be three times higher or more, as they'll be bringing their families along.

“It's not just a temporary foreign worker program,” he said. “It's a permanent program to give permanent residency to skilled immigrants and their families.”

Asked if anti-immigrant sentiment may be an issue in the program's introduction, Hussen said Canada isn't immune to this type of rhetoric, which he said “sows intolerance and fear and division.”

“We know that immigration continues to make a difference in our country,” he said, giving some examples of newcomers who are making contributions in their field.

“One of the reasons why Canada has the best performing economy in the G7 countries is immigration. Immigration is actually an economic difference maker between us and our competitors around the world,” the minister said.

The new pilot project is designed after an Atlantic Canada immigration pilot that has been successful in growing the population and filling labour market needs there.

The Atlantic model sees immigrants arriving in the region with a job offer and an individualized settlement plan for them and their families.

Hussen pointed to a recent population increase in Nova Scotia this year as proof the program has been working there.

But retention of immigrants in areas outside of major urban centres has been an issue, notably in Atlantic Canada.

Only 16 per cent of immigrants who filed tax returns in Prince Edward Island in 2011 were still living there five years later, according to 2016 census data.

Hussen acknowledged the role municipal leaders played in pushing for the new pilot.

"This is a common, common ask — municipal leaders are saying, 'Please, we need more people, more workers, more families,'" he told The Canadian Press in an interview.

"Immigration is not the only tool, but it is one of the tools that can be used to address labour market shortages and skilled shortages."

The new rural pilot has a special focus on retention.

Hussen said communities that are selected to participate will not only have to demonstrate a need for skilled workers, they will also have to prove they have the settlement infrastructure in place. That includes language and employment supports so the newcomers can "hit the ground running."

- with files from Heidi Ulrichsen, Sudbury.com and Teresa Wright, The Canadian Press

The Government of Canada is committed to supporting immigration strategies that will enable smaller communities to enhance their economic, social and demographic vitality.

Today, the Honourable Ahmed Hussen, minister of immigration, refugees and citizenship, announced the creation of the Rural and Northern Immigration Pilot, a five-year federal immigration pilot involving communities and selected provincial and territorial governments that works to help participating communities gain access to a range of support to help newcomers settle in as part of the local community.

This initiative builds on the success of the Atlantic Immigration Pilot that was launched in March 2017 to help drive economic growth in Atlantic Canada.

As of today, Immigration, Refugees and Citizenship Canada (IRCC) is seeking applications from interested communities in Ontario, Western Canada, and the territories in order to select communities to participate in the pilot. Interested communities must work with a local economic development organization to submit an application, demonstrating how they meet the eligibility criteria and how immigration will promote economic development in their community.

"Communities throughout rural and northern Canada are important to the growth and prosperity of our country. Regional economic development is a priority of our government, and we will continue to seek out innovative solutions like this pilot project to help our economy grow for all Canadians." – The Honourable Navdeep Bains, minister of innovation, science and economic development

•    Find out if your community is eligible to apply.

•    Interested communities have until March 1, 2019 to submit a complete application.

•    Selected communities will be announced in spring 2019.

•    IRCC will work with selected communities to position them to begin identifying candidates for permanent residence in summer 2019.

•    The Atlantic Immigration Pilot was launched in March 2017 as part of the Atlantic Growth Strategy. The four Atlantic provinces are able to nominate up to 2,500 workers in 2018 under that pilot to meet labour market needs in the region.

•    Under the Canada-Quebec Accord, the Government of Quebec has the authority to select economic permanent residents destined to Quebec.