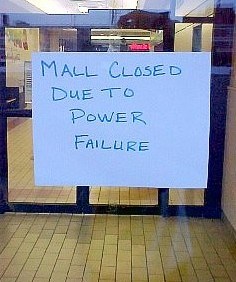 The 130-store Station Mall closed at 6 p.m. after the lights went out at approximately 5:15 p.m. and PUC workers advised it could take a couple of hours to restore service.

The outage affected other buildings along the Bay Street corridor, including the senior's apartments on St. Mary's River Drive and the ASCU Community Credit Union offices.

Even City Hall was in the dark.

About 20 people attending a meeting there were moved outside.

Docks Riverfront Grill turned away between 100 and 200 customers during the 90 minutes it lost power.

At Station Mall, power was restored to the east end of the building (near Sears) around 7 p.m. and to the west end (Zellers) around 7:30 p.m.

Galaxy Cinemas re-opened for business for its late shows, but when we last spoke to the PUC just before 10 p.m., a crew was still working to restore electricity to the central part of the mall.

The PUC and mall management both expected everything would be back to normal well in advance of Thursday's opening.

Mall manager Hans Geneen told SooToday News that it was the most extensive electricity-related closure he can recall in his dozen years at Station Mall.

We'll never leave you in the dark