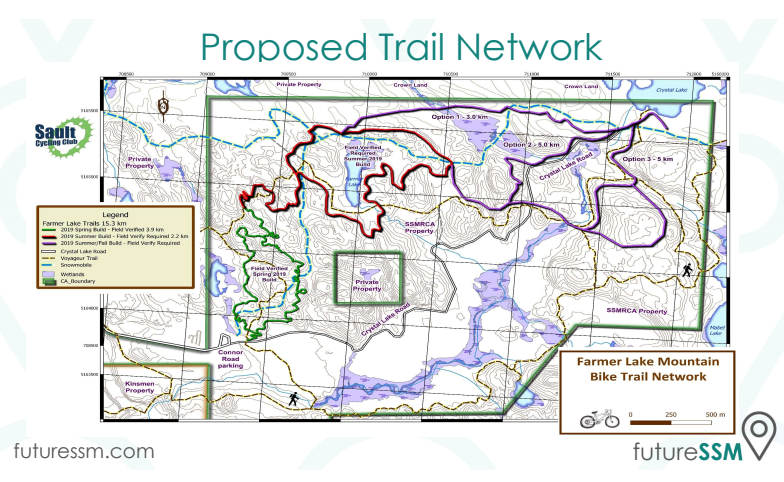 The 15-kilometre Farmer Lake Mountain Bike Trail Network proposed by Future SSM in partnership with the Sault Cycling Club and Tourism Sault Ste. Marie has been given the green light to move forward with the construction of the trail this spring.

A resolution allowing for the trail network was passed by the Sault Ste. Marie Region Conservation Authority (SSMRCA) during its monthly board meeting Tuesday.

“We’re obviously, between Future SSM and our partners, very excited about getting that approval from the conservation authority, and looking very much forward to initiating construction activities,” Future SSM Project Manager Travis Anderson told SooToday Wednesday.

Anderson figures that construction on the first portion of the bike trail network - known by project partners as the green loop - could begin as early as next month.

Work on that trail will be completed by volunteers, with tentative plans to bring in professional trail builders to work on the other two portions of the network, known as the red and purple loops.

“We are still looking at funding options with the partners for the subsequent two trails - the red and the purple - but we don’t have a concrete path forward on funding to bring in a professional crew for those trails at this point,” Anderson said.

SSMRCA General Manager Rhonda Bateman - who’s leaving her post at SSMRCA in early May to assume the role of chief administrative officer position for Lower Trent Conservation near Trenton, Ont. - says that a master plan for Hiawatha Highlands still needs to be hammered out in order to allow for any further trail development going forward.

“The master plan is looking after environmental considerations as well, because we don’t want any erosion and any degradation of the landscape there. So there’s a lot of factors in there.”

Anderson says that further trail development, as an add-on to the 15-km bike trail network, is still in the infancy stages at this point.

“We are in the early stages of looking at a broader trail development plan, which would be considered the next phase,” said Anderson. “We haven’t presented any of those plans yet because we haven’t fleshed out those details, but going forward they would like to see a trail master plan, just to make sure that all users are working together in terms of developing the resources in terms of trail development in a unified manner.”

Project partners would ideally like to see the Farmer Lake Mountain Bike Trail Network completed in time for the 90-kilometre Crank The Shield cycling event, scheduled to take place in mid-August.

More detailed information on the Farmer Lake Mountain Bike Trail Network can be found on the Future SSM website.