Forget all that other stuff the media is talking about. Mayor Christian Provenzano says the problems at Essar Steel Algoma are pretty much the only thing occupying his time right now.
Jan 26, 2016 1:12 AM By: David Helwig 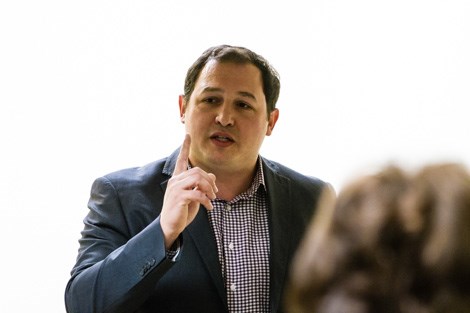 The current difficulties at Essar Steel Algoma are so important that Mayor Christian Provenzano is hardly spending time on any other issue.

"To be quite frank with you, I have minimized the amount of time I'm spending doing other things," the mayor told a City Council meeting last night.

The local steelmaker's insolvency is really "the only issue right now, from my perspective, that requires our 100 percent attention."

"A lot of the other issues that are in the media, that are being talked about, are not even secondary compared to this. They're tertiary. They're three or four or five levels down the rung."

Whereas Essar Steel Algoma Inc. (ESAI), the City of Sault Ste. Marie’s largest private-sector employer, is currently under Company Creditors Arrangement Act (CCAA) court protection, and its capacity to exist as an integrated steel manufacturer is uncertain due to a number of key operational, financial, economic, and market factors; and

Whereas Statistics Canada 2015 Census data indicates, Sault Ste. Marie had the lowest labour force and employment levels as well as the lowest employment participation rates in 20 years; and

Whereas the weak national and global economy, the low value of the Canadian dollar, significant Tenaris–Algoma Tubes layoffs (approximately 500 out of 700) and significant impacts to affected local ESAI unsecured creditor companies are all exacerbating an already difficult economic situation for the community; and

Whereas the impacts of this situation are only now starting to be realized;

Now therefore be it resolved that council direct the Sault Ste. Marie Economic Development Corporation and Chief Administrave Office Al Horsman to report back to council no later than February 22, 2016 with a suggested course of action and recommendations for its consideration and support.

That, combined with the city’s major employer under court protection from its creditors, the uncertain situation at Tenaris Algoma Tubes, and changes at Ontario Lottery and Gaming Corporation, collectively represents “a significant issue,” Dodds said.

A response is being developed to cover three areas:

“In  a nutshell, what we’ve been working on is how we get ourselves organized,” Dodds said.

Chief Administrative Officer Horsman said City Hall has reached out to other municipalities like Hamilton and Regina that might have similar concerns about the steel sector.

“As a municipality, there’s only certain things we can do,” Horsman said.

The CCAA process is independent and opportunities for the municipality to get involved are limited, he added.

The city is able to raise concerns from its own financial viewpoint.

Horsman disclosed that the city has just retained a law firm to represent it at Essar Steel Algoma’s restructuring proceedings in Toronto.

The city is also talking to local unsecured creditors, “to get a sense of what the municipality can do to assist there.”

City officials are also looking at the possibility of what Horsman termed a “mini infrastructure stimulus fund” to help local industries.

Mayor Provenzano has asked the city to review its asset management plan, to see whether any initiatives could be leveraged to help businesses hurt by the problems at Essar.

The mayor said that the solutions to much of Essar Steel Algoma’s dilemma lie at the federal level.

According to the mayor, when a city lobbies the federal government, it must have:

Provenzano said anything he does will be in conjunction with Sault Member of Parliament Terry Sheehan.

“As Essar goes, we go as a community,” Christian said.

“My intention in bringing forward the resolution is to pull the community together. I think council needs to take a leadership role to respond to this unprecedented situation.”

“We need all the stakeholders in the community involved,” Christian said.

“I think there are forces at work within the government and international organisations that are making it hard for Essar to succeed.”