Robert G. Wood doesn't disbelieve those who say they saw Sault Ste. Marie's famous Cross on the Hill moving one day last month. But after being invited by local school officials to check the local landmark, the president of the M.R.
Feb 4, 2005 1:29 PM By: Carol Martin 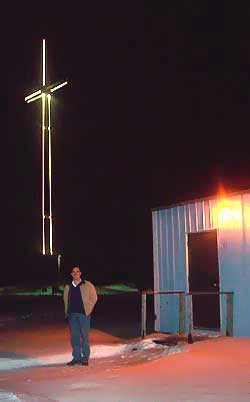 But after being invited by local school officials to check the local landmark, the president of the M.R. Wright & Associates Co. Ltd. engineering firm is utterly at a loss to explain how or why the 120-foot structure was seen swaying in a two-foot arc for more than two hours on a calm, cold day.

"I look at it as a very sound structure," Wood tells SooToday.com.

"It has survived some pretty good wind forces in its time. It was there when the Edmund Fitzgerald went down and it is on a highly exposed area," he said.

As SooToday.com reported earlier today, the cross's alleged activity was witnessed the morning of Monday, January 24 by math and music teacher Christopher Gravelle (shown above), Notre Dame des Grands Lacs principal Stephane Picard, a host of students and groundskeeper Gerry Ouellette, who's also the author of the 2002 book The Cross at the Centre of the Continent.

Concerned that the big cross might fall on Gravelle's portable (also shown), school officials moved his classes into the school library and called in Wood to check for structural damage.

The consulting engineer tells SooToday.com that he found no evidence of movement when he inspected the base of the structure, but he says he would have expected none.

The free-standing structure is constructed of tubular and plate steel that has been welded together.

It is cantilevered to be able to sway in the wind and still stand safely without structural damage to the base.

"It was fully anchored with steel bolts cast right into the concrete and there was absolutely no evidence that I could see that any movement had occurred at the base," said Wood.

100 times stronger than a flagpole

Wood describes the cross as a major steel structure that is more than 100 times stronger than a flagpole.

"On a calm day we shouldn’t see any movement whatsoever," he said.

There was no wind the day the flexing phenomenon was observed, Gravelle said.

"I have no rhyme nor reason to refute the statement [that the cross was swaying] but I can see no reason for its occurrence," Wood told SooToday.com.

He investigated the possibility of ground movement but said we don't get earthquakes in this area so he's ruled out that possible explanation.

Wood said other things like ground shifting in the frost, pipes bursting or an underground cave somewhere in the area could have made the base move, but probably not that much.

In any case, any ground movement would likely have left evidence on the base.

"It is on the top of the hill but at this time of year with the ground frozen and no one around [it is not likely]," said Wood.

He suggested the only way the cross could have moved is if something, perhaps the wind or impact of an object, applied force to the top of it.

Wood said the cross is an old but very solid structure and that he's still searching for a reason why it may have moved as reported.

Wood said he concluded that a thorough investigation of the structure was not needed because the base showed no evidence of stress or movement, and because the cross was not moving when he saw it and has not been reported to have moved since then.

Isn't it time you made SooToday.com your home page?

Just click here and we'll make sure you're never out of the loop on all the news from your hometown.