A sealed plastic tote containing a number cats and kittens was discovered near a dumpster Tuesday afternoon
May 3, 2018 11:00 AM By: Brent Sleightholm 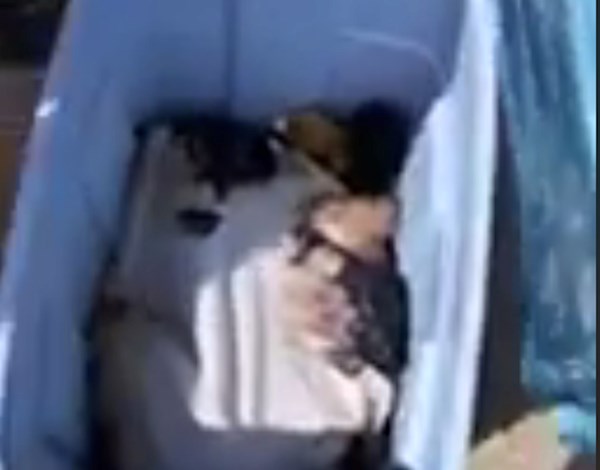 A video still showing the tote discovered on May 1, 2018 that contained a number of abandoned cats and kittens

An Elliot Lake man and his son made a grim discovery this week as they delivered a load of garbage to a dumpster located near Stanrock Road and Highway 108, north of the city. The City of Elliot Lake paramedic John Coulis and son Matt happened to stop their truck at the dumpster early Tuesday afternoon for the routine chore of putting out their trash.

On on Tuesday, May 1, the first warm day in months with outside temperatures hovering near 25 degrees Celsius, John saw a plain light blue blue plastic tote on the ground in full sun. There was a note attached which read simply “HELP US.”

Mr. Coulis sensed something was wrong and removed the tightly-sealed lid of the tote after he heard the faint sound of an animal crying inside the storage device. His worst fears were realized when he found six young kittens, covered in their own fluids and mewing as they struggled to breathe inside the plastic box.

He also saw a pillow case which he and Matt found someone had wrapped four struggling adult cats in, inside the box. One adult animal, wet with it’s tongue hanging limp out of its month, was still alive. It was obvious someone had left the cats to die. Not only die, but to suffer and die.

It turned out that two of the cats had recently given birth to the little kittens.

John urged his son to get a video of the grisly discovery on his phone and then they scrambled to take the animals, now with the lid of their plastic prison removed, into the air conditioned pickup. Thinking that quick action alone might save some of the kittens and cats, Mr. Coulis decided to drive south to Elliot Lake on a mercy errand. He contacted his wife Janice at their home by cellphone, advising her of the emergency. She in turn contacted Elliot Lake SAD – the Society for Animals in Distress – on Perini Road. Quickly, City of Elliot Lake Bylaw Enforcement Officer Bruce Elliott was alerted and he called John Coulis, offering to meet him part way on Highway 108. Instead, John decided to not break his stride and rendezvous with the city official later when he got to his destination.

John Coulis decided to drive straight to the SAD building, hoping to save some lives. At that point the staff in the building were alerted about the situation and reached out to Elliot Lake veterinarian Dr. Morris Belanger who soon took the surviving animals into his care.

The two mother cats did not survive their ordeal, but their kittens did. The fate of the remaining two adult cats, hangs in the balance. When they were able to be moved following emergency care, the kittens were returned to the SAD shelter where another cat, nursing her own litter, took on the task of feeding the six orphans as well.

Mr. Coulis and the staff at the shelter are hoping that someone saw something, and will say something. He says, “The pillow case the adult cats were wrapped in had a picture of either the face or face and body of a dog.” He thinks that could trigger someone’s memory.

Both John and his wife Janice have posted a video of the animals taken at the dumpster on their Facebook pages. They caution that some people will find the video distressing and John curses a few times during his discovery of the abused and abandoned felines. To view the video, please click here.

Janice Coulis posts, “Someone knows who this is. Who does that? Someone sticks them in a sack and in a plastic bucket in 25 degrees and then down the highway.”

Anyone who wishes to help with the care of the rescued cats can contact SAD in Elliot Lake. Their email is admin@sadelliotlake.com, or phone, 705-461-3197.

The East Algoma Ontario Provincial Police (OPP) are asking for assistance in regards to an animal cruelty case that occurred on Stanrock Road just north of the City of Elliot Lake, Ont. on May 1, 2018.

A citizen found numerous cats and kittens inside a plastic tote bin left beside the garbage bins. The animals were in need of immediate medical attention and were therefore transported to a local veterinarian. There were eleven cats in total stuffed in to the small plastic bin. Four adult cats and seven kittens. One cat was already deceased and numerous others died later.

The OPP's Scenes Of Crime Officer (SOCO), Forensic Identification Services (FIS) and the Sault Ste. Marie Society for the Prevention of Cruelty to Animals (SPCA) are assisting with the investigation.

Any person with information regarding the person(s) responsible for this incident should immediately contact the Ontario Provincial Police at 1-888-310-1122 or their nearest police authority.

Should you wish to remain anonymous, you may call Crime Stoppers at 1-800-222-8477 (TIPS) or submit information online at www.tipsubmit.com where you may be eligible to receive a cash reward of up to $2,000.