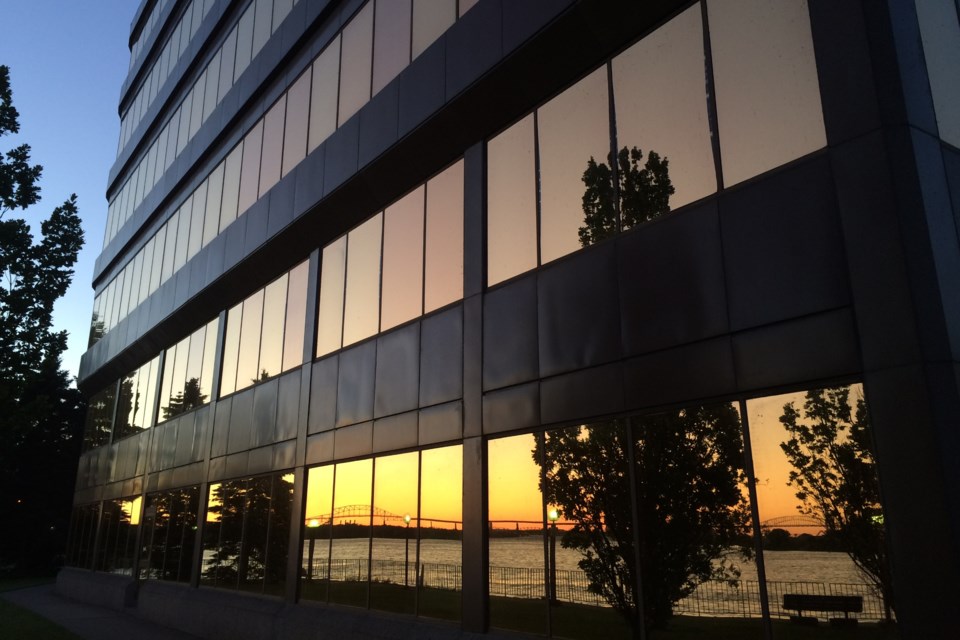 The International Bridge is seen reflected in Civic Centre windows on August 7, 2016. Photo by David Helwig/SooToday.
Sault Ste. Marie Association of Ratepayers wants City Council to consider up to four new appointments to safeguard integrity and accountability in public office.
Dave Poluck, volunteer organizer with the association, says the group was reviewing Ontario's Municipal Councillor's Guide when it noticed that councils are authorized to appoint an integrity commissioner, municipal ombudsman, auditor general, a lobbyist registrar and to develop a code of conduct for councillors and local board members.

Of those five actions, Sault Ste. Marie has implemented just one, Poluck said.

We have a code of conduct, but counting the cover it's just four pages and Poluck says that's far less comprehensive than other municipalities.

Timmins, for example, has a conduct code that's 13 pages long.

As for the other allowable appointments, the association reviewed policies at 35 Ontario municipalities and found just two that hadn't made all the appointments.
"This came out of the municipal councillors guide," Poluck tells SooToday.
"It jumped out at me. We've identified something that we're lacking in."
Does the ratepayers' association, a group that has traditionally fought to keep municipal spending low, really want four new city appointees?
Some positions, such as an auditor general, can actually save tax dollars, Poluck says.
He also points to the possibility that appointees could be shared with other area municipalities to keep costs down.
The following are excerpts from the Municipal Councillor's Guide outlining the four appointments that Poluck's group wants considered:
Integrity Commissioner
The integrity commissioner reports to council. The integrity commissioner’s role is to perform, in an independent manner, the functions assigned by council with respect to the application of: (1) a code of conduct for members of council and local boards; and (2) the application of procedures, rules and policies governing the ethical behaviour of members of council and local boards. The commissioner’s functions may include conducting inquiries into requests from council or a local board, a member of council or a board, or a member of the public about whether a member of council or a local board has contravened the applicable code of conduct. If the commissioner reports that a member of the council or local board has contravened the code of conduct, the municipality may impose a penalty in the form of a reprimand or a suspension of pay for a period of up to 90 days.
Municipal Ombudsman
The municipal ombudsman’s function is to investigate, in an independent manner, decisions and recommendations made and acts done or not done in the course of the administration of a municipality, local boards or certain municipal corporations, as the municipality specifies. Section 239.2 of the act also provides that a municipality may appoint an investigator to investigate, in an independent manner, complaints about closed meetings. Should a municipality not appoint an investigator, the Ontario Ombudsman is the closed meeting investigator, by default, for the
municipality.
Auditor General
The auditor general may assist council in holding itself and municipal administrators accountable for the quality of stewardship over public funds and achieving value for money in municipal operations. The auditor general must also perform his or her duties in an independent manner. The auditor general’s responsibilities do not include the responsibilities of the municipal auditor.
Lobbyist Registrar
The act authorizes a municipality to establish a public registration system for lobbyists and to do other things in relation to a lobbyist registration system, such as establishing a code of conduct for lobbyists and prohibiting former public office holders from lobbying for a designated time period.

The Sault Ste. Marie Association of Ratepayers will ask City Council to hold open consultations on the four permitted appointments, and also to review the city's current code of conduct.

It also wants the city to look into adopting best practices to dovetail with upcoming expected changes to the Municipal Act.

The Sault Ste. Marie Association of Ratepayers issued the following statement on Monday:

August 15, 2016 - This past February volunteers of the Sault Ste. Marie Association of Ratepayers [SSMAR] were made aware and began the study of information that under Part V.1 sections 221.1 to 223.4, transparency and accountability of the Ontario Municipal Act the City of Sault Ste Marie is defiant in comparison to other municipalities.

Through this action SSMAR volunteers participated with the public input process at the provincial level to the proposed upcoming changes to the act, including the gathering of information and seeking guidance from MPPs David Orazietti, Micheal Mantha and Monte McNaughton as well as the office of the Minister of Municipal Affairs.

The Municipal Act is a fluid document subject to change and constantly evolving.

Our information is that changes will be coming forward at this fall's session of the Ontario Legislature.

Recommendations from across the province have been gathered in order to increase transparency and trust for municipal governments.

To help ensure integrity and accountability in public office, Part V.1 of the 2001 act sections 223.1 to 223.24 provides that municipalities may pass bylaws to establish:

As it currently stands Sault Ste. Marie has only one of those listed under the 2001 Municipal Act: a code of conduct, created in 2010 which lays out rules and policies governing the ethical behavior of members of council and local boards.

The current code, including the cover, is four pages while other smaller municipalities such as Timmins are significantly more in total and detail.

Through the process of information-gathering it was found that although the wording of "may" is used, a majority of Ontario municipalities have in place all of the Part V.1 components, leaving the municipality of Sault Ste. Marie in the extreme minority of those that don't have these bylaws in place.

After studying these and other documents, the conclusion reached and the consensus taken was that action was required.

Firstly the code of conduct is in need of review and amendment and secondly that an action of public and open discussion and consultation should be taken and needs to take place to bring into effect the required bylaws that bring Sault Ste. Marie up to parity under Part V.1 with other municipalities under the 2001 Municipal Act.

This action is not a criticism or negative reflection towards our council but an effort to improve municipal affairs in order to serve the community interest better.

As of last week we have submitted a formal request to appear before council and make our presentation and move forward to a process of discussion to bring our municipality up to par with a majority of others in Ontario in regards to Part V.1 of the 2001 Act.

We will be seeking support of council to:

The goal from this action is to bettering the municipal process and achieve parity with other Ontario Municipalities with all the tools allowed that help ensure integrity and accountability in public office as found in Part V.1 of the 2001 act sections 223.1 to 223.24.

Further information is available by email saultratepayers@hotmail.com or the Ministry of Municipal Affairs and Housing website.