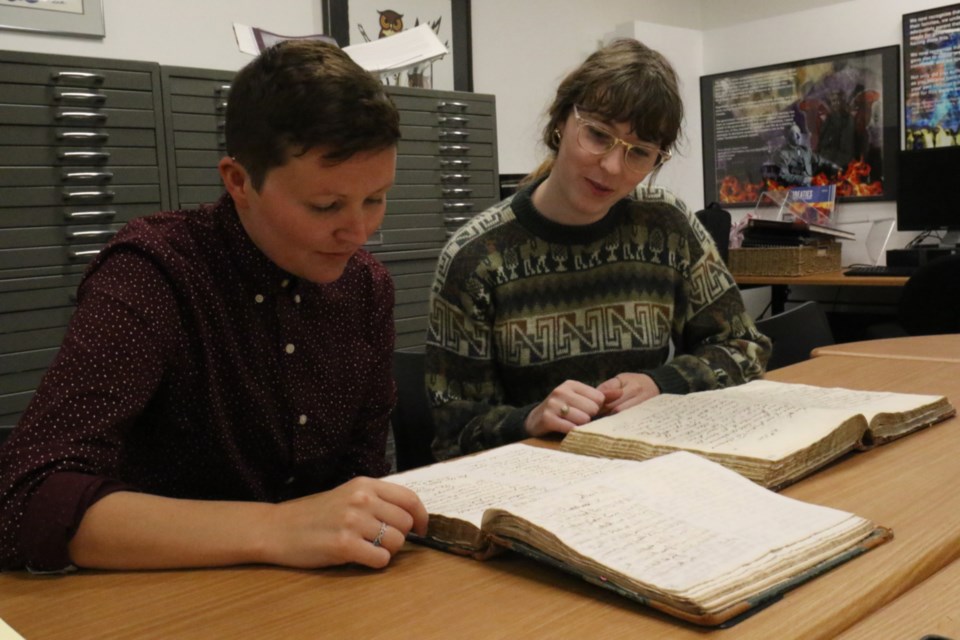 The Shingwauk Residential Schools Centre (SRSC) is preserving documentation of daily life in the Shingwauk and Wawanosh residential schools through its Healing and Education Through Digital Access project.

A total of 10 letter books spanning a period from 1876 to 1904 were digitized, which include letters from residential school principals Edward F. Wilson and George L. King, which were intended for government officials, church representatives and students, among others.

Researcher-slash-curator Krista McCracken says that a number of survivors from the Children of Shingwauk Alumni Association were able to provide SRSC with extensive input.

“We were picking material that they wanted to see digitized, that they wanted to make accessible,” said McCracken. “We also built into the grant funding to bring survivors to this site, so we could gather together in person to look through the letter books and discuss how that digitization project was going to work.”

The digitization of the letter books, which was made possible through $86,690 in grant money from the National Heritage Digitization Strategy, didn’t come without its challenges.

Digital archives technician Jenna Lemay says that original letters contained in the letter books were carbon-copy transfers - and that, combined with principal Wilson’s tight handwriting, made them hard to read.

“Sometimes the transfer didn’t work very well, so some sections are readable, whereas other sections of the exact same letter aren’t - so it really varies letter to letter.”

The Children of Shingwauk Alumni Association didn’t want the source material to leave SRSC for digitization, so Jacqueline Vincent of Brechin Group Inc. was hired to come to Sault Ste. Marie in order to photograph and process the books.

“The survivors that we worked with made it really clear that they didn’t want these materials to be shipped off the site,” said McCracken. “They wanted them to stay here, and have someone come to digitize them.”

The survivor community, comprised of a dozen residential school survivors, also had input into how the end result would look.

“I had a lot of talks about the format of the digitization, so how it was displayed on the website, the metadata - so the terms that were used, and the language and the descriptions,” Lemay said. “They were very involved, saying what they liked and didn’t like, so they did make a few comments when I came back to them with a couple descriptions for some language changes.”

The survivor community also made it clear to McCracken and Lemay that nothing in the letter books should be omitted from public consumption.

“When they were asked if there was any information that they didn’t want to release, they were pretty clear that they wanted all of the information available to people,” said Lemay. “They sort of were unsure about some abuse stuff - there was some physical abuse that was detailed in the letters, but they said that they wanted to make sure that that was out there, because it sort of corroborates survivors’ stories, that this did actually happen, and here’s written proof that it happened.”

McCracken credits Lemay for her work in making the project so accessible to the public through her extensive notes and descriptions surrounding the books, which provide context for the often vague letter writing of Wilson.

“We’re happy with how the digitization went, also the really robust description work that Jenna [Lemay] did, I think makes this material a lot more accessible,” said McCracken. “Some of the letter books, they range from 500 pages to 1,000 pages. As a researcher just scrolling through 500 pages not knowing what topics are in that is really daunting.”

McCracken and Lemay would like to expand on the digitization project by eventually adding detailed annotations transcriptions and a student index to the digitized letter books.

For now, people with further questions regarding the content of the digitized letter books can contact the SRSC directly.

“With these letter books, we definitely see this as just the first step in a series of work that can be done with them,” said McCracken. “There’s lots of work around things like transcribing the letters, so that they’re easier and people can read a typewritten text versus the really tight, hard to read handwriting, or doing annotations around them, making lists of the student names listed - things like that.”

The pair also point out that the digitization of the letter books satisfy some calls to action issued by the Truth and Reconciliation Commission because the project makes the letter books accessible, allowing survivors, people living in remote communities and the general public access to the online, download-ready material.

The letter books are now available for online viewing and downloading via the Algoma University archives and the Internet Archive.