Did you get this controversial 'newspaper' in the mail this week? You're not alone 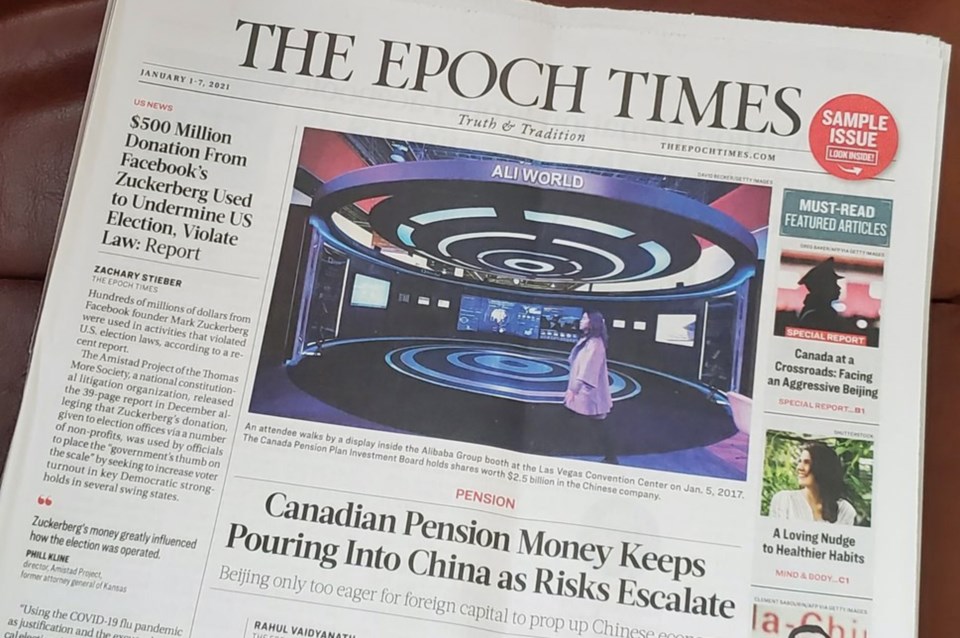 Free sample copies of The Epoch Times, a controversial publication that's been criticized for its far-right leaning politics, has been arriving unsolicited in mailboxes across Canada this week. Twitter photo

It was a couple of days ago when Jeff Arbus found a copy of The Epoch Times bundled with a handful of flyers in his mailbox.

“I’d never seen it. It had been mentioned to me once or twice in the past, but I hadn’t really paid much attention until I saw it,” said Arbus. “Then, I went on the internet and dug up some more about what this thing was.”

A quick scan of social media indicates that Arbus wasn’t the only one in the Sault to receive a sample of the controversial publication, which is reportedly one of Donald Trump’s biggest advocates, and maintains close ties with the Falun Gong community.

It’s unclear how many copies have been distributed by mail locally.

“I don’t need to see it again,” said Arbus. “It certainly is very political. They have a real issue, they obviously want to take on China, and I’ve read that they’re associated with Falun Gong - I’m not.”

“But in terms of their comments and articles about Canadian politics, certainly far-right of the political spectrum is where they’re at, and I got a sense of white privilege. I read through it, and I have no interest in seeing it in the future,” he continued. “In fact, I didn’t really appreciate getting it delivered like that.”

Canada Post says that it’s obligated to deliver the publication.

“We always listen when customers or employees bring forward concerns about a particular mailing and we understand. As Canada's postal administration, Canada Post is obligated to deliver any mail that is properly prepared and paid for, unless it is considered non-mailable matter,” said Canada Post, in a statement to SooToday Friday. “The Courts have told Canada Post that its role is not to act as the censor of mail or to determine the extent of freedom of expression in Canada. This is an important distinction between Canada Post and private sector delivery companies.”

“Any views we may have about the content do not change our obligation to deliver. Any further questions about the publication should be directed to the publisher.”

Algoma-Manitoulin-Kapuskasing MP Carol Hughes says her offices have been fielding complaints surrounding the unsolicited copies, according to a social media post that went public Friday afternoon.

“My offices have been receiving complaints across the riding about copies of The Epoch Times which they have received in the mail,” reads the social media post. “The Epoch Times is a propaganda pamphlet that resembles a newspaper but promotes far-right opinions and ideals. The copy circulating includes pieces written by Americans with ties to the Trump administration. Both the federal government and Canada Post have also received similar complaints.”

Arbus says the content in The Epoch Times struck him as ‘pretty slanted’, and noted that his free copy has found a new home in his recycling bin.

“I get that it’s business for Canada Post. But really, Canada Post is usually pretty guarded about distributing political commentary, and I would hope that they would be in this case as well,” Arbus said.