'Defunding' police: Petition calls on city to reallocate 10 per cent of police budget to social services 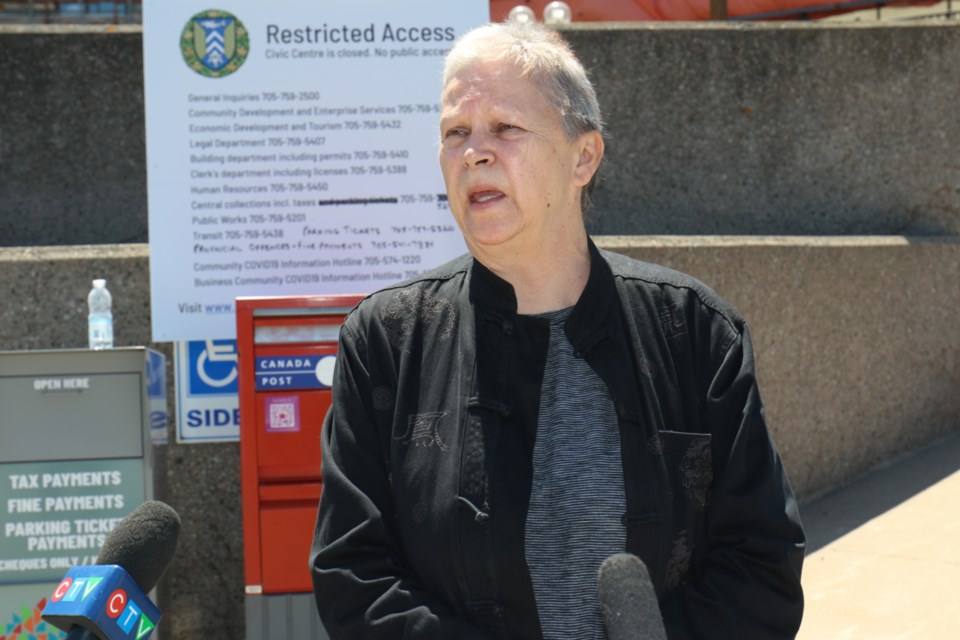 Dr. Paulette Steeves, an assistant history professor and Tier II Canada Research Chair in Healing and Reconciliation at Algoma University, delivered a statement to local media at the Sault Ste. Marie Civic Centre Thursday about the global movement calling for a defunding of police, which she feels has led to a general misunderstanding of the concept by the public.

“There’s been a worldwide movement of different groups of people asking for defunding of the police, and I think there’s not a good understanding of what that is,” Dr. Steeves said. “Defunding of police does not mean stripping a department of its budget, or abolishing it altogether.”

“It’s about scaling back budgets, and reallocating those resources to other agencies - investing in communities, education and medical access.”

The research chair’s statement follows an online petition - created by a group of community members who wish to remain anonymous - calling on The City of Sault Ste. Marie to claw back the Sault Ste. Marie Police Service budget by 10 per cent, or roughly $2.75 million, and reallocate that funding to Social Services Sault Ste. Marie District.

“A 10 per cent cut in the city endowment to the Police Services Board would not stop their ability to perform their job. They will still receive $24 million in funding from the city,” the petition reads. “Yet with this symbolic transfer of funding, we make a meaningful gesture towards finding new ways of making our community safe and peaceful without further arming and militarizing our police force.”

A handful of would-be supporters of the petition showed up for Thursday’s media opportunity but unexpectedly bailed out, leaving the professor to speak to the ‘defund policing’ movement on her own in front of City Hall.

“Defunding police services simply means funding social and healthcare services to create healing, which has been shown to lower crime rates in communities,” said Dr. Steeves. “We do not need to militarize and expand police forces. We need to fund and expand healthcare and social services to alleviate current calls to police, where they are put in positions of acting as social workers and doctors - positions that are outside of the realm of the duties that they were trained for.”

The research chair says that in a local context, officers Sault Ste. Marie Police Service shouldn’t be spending hours sitting in a hospital with mental health patients. They are police officers, she says, and not mental health professionals.

Dr. Steeves is now calling for all levels of government to increase funding for healthcare professionals and infrastructure, while training people who are willing to stay in northern Ontario and work in social services and mental health.

“Expanding social and economic programs for under-resourced communities actually leads to an overall decrease in crime. That’s because crime is often a response to social conditions,” she said. “More policing cannot fix social conditions - only investments in communities can. When people get the help they need earlier, they’re less likely to end up in the kind of dangerous situations that police might be called to diffuse, situations that have often turned deadly for those individuals.”

Some would-be supporters of the petition may have unexpectedly bailed just before Thursday’s media opportunity, but Dr. Steeves says she wanted to deliver her statement in support of the student community.

She also confirmed that she will be signing the online petition.

“A student emailed me, and I thought it’s very important to support students. I’m always telling students to speak out, to be responsible, to think critically - to take action to make communities a better place,” she told SooToday. “So when they asked me to speak today, I had no issue with coming to speak, because I’m telling them to do the very same thing.”

“I’m trying to help them understand how to be proactive citizens in whatever community they’re living in, and to make it a better place for everybody.”

More than 1,200 people have signed the petition as of Thursday evening.