Thanks to Johnny Pints Presents… last night was as far from a typical Sault Ste. Marie Monday night as one could get. Mr. Pints (AKA J.D.
Aug 20, 2013 4:38 PM By: Donna Hopper
Previous Next
1 / 1 Airbourne
Expand
Previous Next 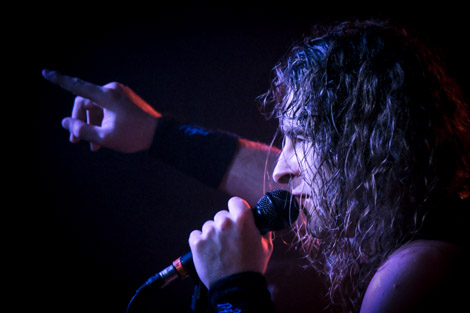 Thanks to Johnny Pints Presents… last night was as far from a typical Sault Ste. Marie Monday night as one could get.

Mr. Pints (AKA J.D., AKA John Pearce) hosted a night of straight-up, in your face, ear-piercing rock and roll at the Canadian Night Club with Australia's Airbourne and special guest, Bleeker Ridge from Orillia, Ontario.

In fact, the only thing they're missing is a grown man in a school boy uniform.

Still, what they do, they do exceedingly well by sticking to the tried and true rock basics - solid rock/blues riffs, fierce guitar solos, and howling vocals - for a no frills, all punch live concert experience.

So loud, in fact, the earplugs vibrated out of our ears on more than one occasion.

Airbourne is currently touring North America behind the band's third studio release, Black Dog Barking, from which the first single, Live It Up, reached No. 3 on the Canadian Rock Alternative Chart.

Other Canadian dates on this tour include Thunder Bay, Winnipeg, Toronto, Calgary and Edmonton.

Next up for Johnny Pints Presents… are the Dayglo Abortions at the Roosevelt Hotel (306 Korah Rd.) on Monday, September 9 with special guests Last of the V8 Interceptors, Destroilet, Cross Dog, and Jack Spade.

You must be 19 or older to attend.