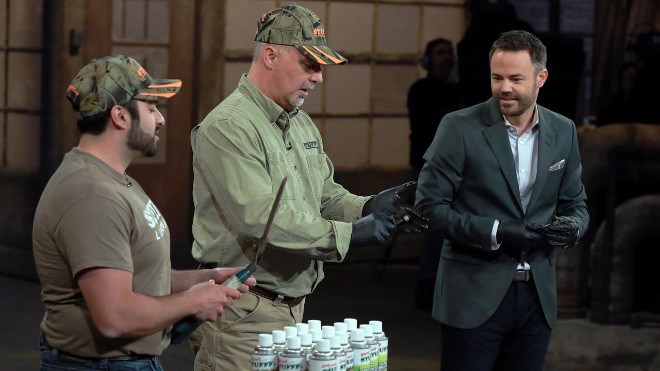 Bill Betournay (centre) and Jeff Greco (left) make their pitch to investor Lane Merrifield during the Oct. 25 episode of the TV show Dragons’ Den. The pair eventually made a deal with investor Jim Treliving. (CBC photo)

A St. Joseph Island entrepreneur has secured the backing of a major investor following his Oct. 25 appearance on the Dragons’ Den TV show.

Bill Betournay of St. Joseph Island and partner Jeff Greco of Sault Ste. Marie agreed to partner with Canadian businessman Jim Treliving – best known as the owner of the Boston Pizza restaurant chain – for 50 per cent of their company, STUFFF Lubricants.

STUFFF Lubricants is a series of environmentally friendly lubricants and degreasers made from used canola oil.

Betournay discovered the benefits of canola oil as a lubricant about four years ago while looking for something to loosen up a seized part on his truck.

He tried out a homemade recipe using canola oil as a base and discovered it worked like a charm. He now manufactures the product from his home shop, sourcing used fryer oil from restaurants around Sault Ste. Marie for his raw materials.

Betournay brought on Greco as a partner earlier this year and applied to be on the TV show last spring.

Appearing before the “dragons” – a panel of potential investors – the partners were initially seeking an investment of $50,000 for 20 per cent of the company.

Most of the investors were interested in the product’s eco-friendly attributes and the story behind its invention, but questioned the $4.50-per-can production cost and the still-nascent business plan.

It was Treliving who saw the potential in STUFFF, calling it a “good product.”

“I think you can go to a smaller can; I think that’s what I’d like to do, because I think we can sell it cheaper,” he said. “I’ve got enough restaurants that dump oil every day, so I’ll do what you came for.”

He followed that up by asking for a 50/50 partnership, to which Betournay had one response: “Let’s do it.”

STUFFF Lubricants is currently available at a number of Northern Ontario retailers, including Home Hardware and Maslack locations across the North.