COVID-19: Here's the situation in the Sault this week 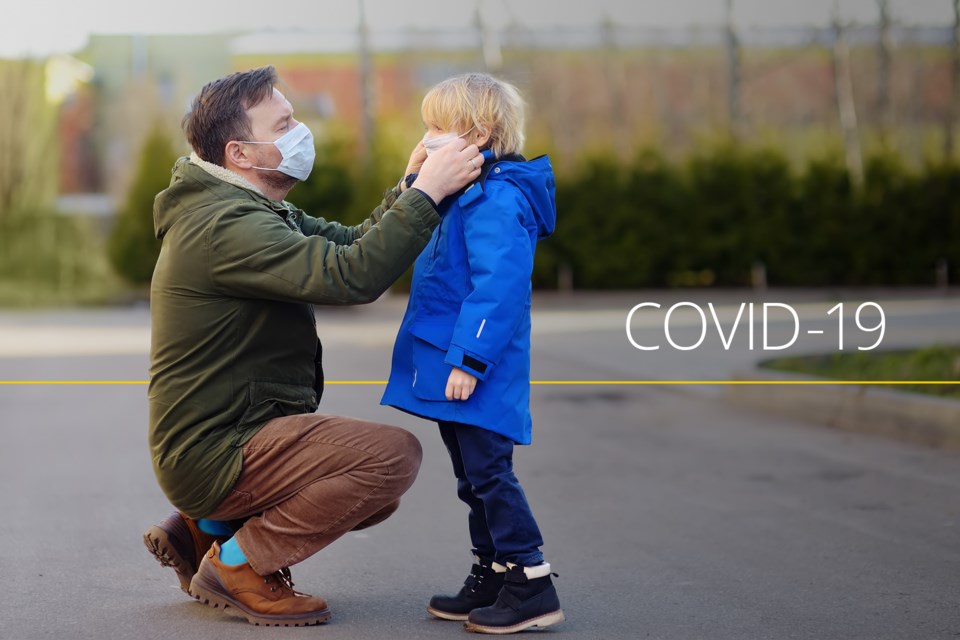 On Thursday, Premier Doug Ford announced that the stay-at-home order, which was slated to expire on May 20, has been extended until at least June 2. Schools will continue teacher-led remote learning.

On a positive note, Deputy Premier and Health Minister Christine Elliott said in a media briefing on Wednesday that more than half of all Ontario residents have now received their first dose of a COVID-19 vaccine.

In terms of vaccine procurement, Canada was scheduled to receive two million doses of the Pfizer-BioNTech COVID-19 vaccine this week. The next shipment of Moderna jabs aren't due until next week.

This week, Ontario paused the delivery of the AstraZeneca vaccine due to an increase in blood clots linked to the vaccine. The province is slated to get a new AstraZeneca shipment, reserved for second doses.

Here's the latest on new cases in Algoma

Over the last week, there have been 19 COVID-19 cases reported in the region.

Here are the latest COVID-19 numbers from Algoma Public Health, updated at 2:00 p.m.:

For a detailed breakdown of COVID-19 cases in the region, click here.

On Monday, Tenaris reported eight active cases of COVID-19 in the workplace.

This comes after Tenaris reported that four employees tested positive for the virus on May 5, and on May 6, a fifth positive case and workplace transmission were confirmed.

According to data on howsmyflattening.ca, a University of Toronto-led website which collects and analyzes data from Ontario's COVID-19 cases, 50 per cent of ICU beds in Algoma Public Health's jurisdiction are currently occupied, two of which are COVID patients.

The province has directed all hospitals, including those in the north, to receive COVID-19 patients as required as the virus puts a strain on ICU capacity in Ontario hot spots such as the GTA.

The data also describes the community risk level for COVID-19 in our region as 'low.'

Comparatively, in Chippewa County, which covers Sault Ste. Marie Mich. and surrounding area, the COVID-19 data as of Tuesday states:

Here's the latest on COVID-19 vaccinations in Algoma

Algoma Public Health is continuing in phase one and is expanding into phase two of of Ontario's 3 Phase Vaccine Distribution Program. As of today at 11:42 a.m.:

Algoma Public Health (APH) has announced another round of COVID vaccination clinics to be held at the GFL Memorial Gardens May 20 and 27, and June 3, 4, 10 and 11.

APH stated in a news release issued Thursday that the 50+ age group has been added to the eligibility list for the GFL clinics.

Bookings for these upcoming clinics, which includes 7,000 appointment slots, begins Monday at 5 p.m. online and by phone.

It was also announced today by APH that a number of new area pharmacies will begin offering COVID-19 vaccinations beginning next week, and will be accepting appointment registrations from those aged 40 and over.

In some Ontario hot spots, nearly 150 pharmacies started offering COVID-19 vaccines to all adults, a shift made to align with provincial efforts to protect the most vulnerable amid a third wave of infections.

Elsewhere, the province expanded age eligibility to those 40+.

Participants gathered at 12 p.m. at the northeast corner of the park, near the intersection of Queen Street East and Lake Street, to voice their displeasure with government and public health COVID-19 measures such as masks, social distancing and lockdowns.

In total, 16 anti-lockdown rally attendees were charged under the Emergency Management and Civil Protection Act.

Dozens of people across Northern Ontario have been fined for violating COVID-19 restrictions.

While most people are eager to receive the COVID-19 vaccine, and while they patiently wait on the phone for a vaccination appointment, the Sault’s Paul Edwards says he would like to see public health authorities be more accommodating to those who find themselves with busy schedules and unique circumstances.

OCHU/CUPE spokesman Michael Hurley said in a report last week that Doug Ford's government has an ethical and moral imperative to increase hospital spending now to ensure that Ontario has enough staff and infrastructure to continue coping with the pandemic.

Alexandra Hilkene, Health Minister Christine Elliot's press secretary, says that since the onset of the COVID-19 pandemic, the Ford government has been working with Ontario hospital partners to create unprecedented capacity to be ready to respond to any scenario.

Hilkene said Ontario has provided hospitals with additional funding of more than $1.2 billion to ensure the hospitals can continue to respond to evolving COVID-19 situations as well as to recover from financial pressures created and worsened by the pandemic.

The announcement was made Saturday morning that the Sylvan Circle Tour, scheduled to be held in mid-September, hs een cancelled due to COVID-19.

Organizers are hopeful that the event will return in 2022, adding that the decision to cancel in 2021 was "the only reasonable and responsible decision."

Saultites hoping to gorge on cotton candy, play carnival games, and ride The Zipper this year will be disappointed to hear the annual Midway fair has been cancelled.

For the second year in a row, the event has been shelved due to the COVID-19 pandemic.

The 2021 International Bridge Walk was also cancelled, and organizers remain hopeful that the event may be able to resume in June 2022.

An audit out on Wednesday has found the Ontario government failed to track properly $4.4 billion in COVID-19 relief spending.

Among other things, the audit found no tracking of when front-line workers received pandemic pay.

The audit also found the program had weak processes to verify funds went to eligible people.

Read more on the audit here.

Closure of Halfway Haven could have devastating effect on snowmobile tourism

Craig Nicholson, well-known to snowmobilers as a Toronto-based freelance journalist, writer and communications consultant with a passion for motorized recreational activities, has stepped forward to voice his support and advice for the owners of troubled Halfway Haven.

As reported earlier by SooToday, the U.S. owned lodge, situated 140 kilometres northeast of Searchmont and accessible by a road off Highway 101, is reeling from the impact of COVID-19 on tourism and is in need of infrastructure repairs.

Nicholson, as a southern Ontarian, said he has not personally approached provincial government funding agencies such as the Northern Ontario Heritage Fund Corporation (NOHFC) regarding financial help for Halfway Haven, but is urging Sault and Algoma sledders with expertise in dealing with government agencies to do so.

Premier Doug Ford is renewing his calls for tighter controls on domestic travellers and those who arrive through land crossings, saying Ottawa has yet to respond to his requests on these issues.

The premier has issued another letter to Prime Minister Justin Trudeau, arguing additional measures -- such as quarantine requirements for travellers coming into Canada by land -- are needing to curb the spread of more contagious COVID-19 variants.

According to a report issued by the International Bridge Administration, a total of 13,079 vehicles crossed one way, an increase of 40.7 per cent from 2020, which saw 9,299 crossings. Comparatively, pre-COVID-19, 102,102 vehicles crossed in the month of April alone.

The Canada-U.S. border closure has been extended until at least May 21, 2021. The border has been closed to non-essential travel since March 2020.

In regards to intercity travel, Greyhound Canada announced on Thursday it is permanently cutting all bus routes across the country.

The decision comes a year after Greyhound Canada temporarily suspended all service due to a sharp decline in passengers and mounting travel restrictions amid the first wave of COVID-19.

In terms of air travel, the Sault Ste. Marie Airport Development Corporation (SSMADC) reported that total passenger traffic for April of this year was 1,334, making a 2,017.5 per cent increase over April 2020, which only saw 63 passengers. However, it marks a decrease from April 2019, pre-COVID, which saw 16,842 passengers come through.

Air Canada called on Ottawa to ease travel restrictions as the airline, which reported a first-quarter loss of $1.3 billion, plans for its post pandemic recovery.

The federal government requires anyone flying into Canada to isolate at a hotel for three nights to reduce the risk of spreading COVID-19.

CEO Michael Roussau says the government must develop and communicate a reopening plan as it is cautiously optimistic that the country is nearing an "inflection point" with the vaccination rate rising in the middle of a difficult third wave.

Meanwhile, Air Transat has extended the suspension of its flights until July 29.

The airline run by tour company Transat AT advised passengers of the extension of the suspension that was slated to end in mid-June in a travel advisory on its website.

OHl prepares for return to play

There’s some optimism when it comes to the Ontario Hockey League returning to the ice for the 2021-22 hockey season.

The league announced on Thursday morning that it expects teams will begin training camps on Sept. 4 with plans to open up regular season action just over a month later on Oct. 7.

The dates were part of a full announcement in which the league has plans for a full 68-game regular season and essentially a return to full action after COVID-19 forced the league to cancel the 2020-21 season.

The OPP stationed officers around the course and were taking photos of people on the 9th and 17th holes on Sunday, May 2.

After leaving the course, drivers where stopped and photos matched with the driver, who were then issued a $750 ticket.The golf course itself was charged on Thursday, of last week with failing to comply with the Reopening Ontario Act. As a corporation charged under the act, it faces a fine of up to $10 million if convicted, however it is very unlikely that can of fine would be levied.

Meanwhile, the Northern Ontario golf industry association president has said that the shutdown threatens the future of the industry in the area. Archie Berube has written a letter to the Federation of Northern Ontario Municipalities asking for support to remove the current restriction on golf in Northern Ontario because of the provincewide stay-at-home order.

Ontario's science advisory table says the province could safely reopen many outdoor recreational facilities, even with an extension of the stay-at-home order. The scientific director of the table, Dr. Peter Juni, says outdoor activities like golf, tennis, and beach volleyball are low risk.

Province to spend up to $340,000 to tackle anti-Asian racism in schools

The Ontario government is putting up $340,000 to help tackle anti-Asian racism in classrooms

The province says the pandemic has sparked a surge in discrimination and hate crimes against people of Asian descent in Canada.

Locally, Mayor Christian Provenzano read a proclamation at the start of this week's Council meeting, addressing the spike in hatred in the wake of COVID-19.

In its report, the Algoma Workforce Investment Corporation attributes climbing unemployment rates to the latest round of COVID-19 restrictions across the country.