Councillors to vote on seizing M.S. Norgoma, handing it over to U.S. businessman (updated)

Assuming no dredging is necessary, it will still cost the city $35,000 to get the Norgama out of Bondar Marina so it can be hauled off by Peter Gregos-Nicols of Chicago
Apr 9, 2018 4:58 PM By: David Helwig 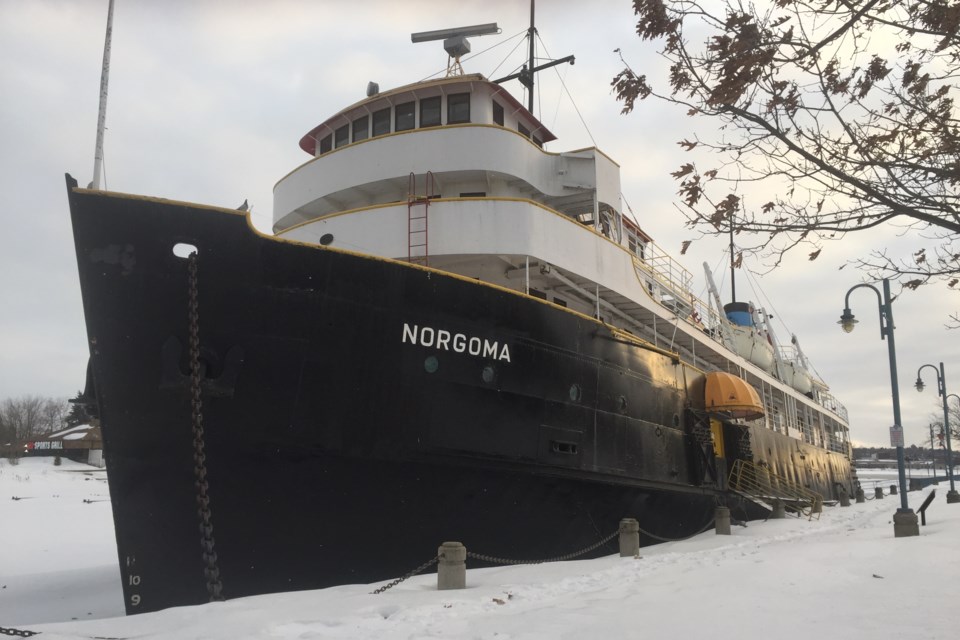 Council voted tonight to defer this matter to its April 23 meeting.

City Clerk Malcolm White advises SooToday that the city’s agenda review committee has made a last-minute decision to recommend tonight that this issue be deferred until April 23. The recommendation is being made because the St. Mary's River Marine Heritage Centre advised it was unable to present at tonight’s meeting. Council may decide to proceed with the debate tonight, but is not expected to do so.

Sault Ste. Marie City Council will be asked today to seize the Museum Ship Norgoma and offer it to Chicago businessman Peter Gregos-Nicols.

A staff recommendation to be debated at today's council meeting calls for taking the M.S. Norgoma back from St. Mary's River Marine Heritage Centre, the not-for-profit group of volunteers that has owned the rusting package freighter and former car ferry for 37 years.

The group's 1981 agreement with the city allows the 68-year-old boat to be reclaimed for $1 if it's not maintained in a safe and attractive condition.

Last summer, the Ontario Ministry of the Environment and Climate Change contacted the city with concerns about a tarp that was found floating in the Bondar Marina, collecting lead-contaminated paint chips that were falling from the 185-foot-long vessel.

The province wanted to know the city's plan for both the paint chips and the boat.

Depending on who you talk to, the Norgoma has either graced or disgraced Sault Ste. Marie's waterfront since 1975.

"It's a long time. That boat has to go," Mayor Christian Provenzano told a council meeting last September.

"I personally believe that boat has to leave the downtown area," the mayor said.

Briefing documents prepared for city councillors contain few details about Mr. Gregos-Nicols or his ability and wherewithal to preserve the Norgoma, an important artifact of the Sault's maritime history.

We do know that Gregos-Nicols first contacted the City of Sault Ste. Marie last October.

In November, he described his interest in the Norgoma during a conference call with city staff and three members of the St. Mary's River Heritage Centre board.

In December, the businessman came to Sault Ste. Marie to tour the vessel and meet the heritage centre's board.

"I am working with a number of like-minded friends and colleagues and we are confident we will be able to raise sufficient funds to undertake this restoration work," Gregos-Nicols says in a written offer to the city submitted on Jan. 25.

He says the Norgoma easily needs half a million dollars in materials plus hundreds of hours of labour to rebuild it to its original 1950s condition.

"The M.S. Norgoma is planned to be a maritime museum and hope is that it will visit major cities around the Great Lakes as time, logistics and funds permit, including Sault Ste. Marie," the offer states.

Tom Vair, the city's deputy chief administrative officer for community development and enterprise services, isn't so sure about that.

"Staff cautions that this is preliminary and due to the logistics and associated expenses the M.S. Norgoma may not return to Sault Ste. Marie," Vair warns.

Neither Gregos-Nicols nor Vair mention any purchase price for the old ship and neither use the words "buy" or "sell" in describing the U.S. businessman's offer.

Vair notes the city would have to pay about $35,000 to remove docks and disconnect water and electrical services to the Norgoma.

If the Norgoma is to be moved, timing will be critical because the Bondar Marina's 29-year-old timber docks need to replaced.

So Vair recommends any moving of the Norgoma take place this fall.

Gregos-Nicols says he intends to apply to the U.S. National Park Service for national historic landmark status for both the Norgoma and its sister ship, the Norisle.

Will Hollingshead from the St. Mary's River Marine Heritage Centre and Sean Meades from the city's municipal heritage committee and cultural advisory board are expected to address today's City Council meeting.

"The M.S. Norgoma is one of the last remaining museum ships remaining in Ontario and to lose this vital part of marine heritage would be a tremendous loss," the group argues.

"The board has recently been revamped with experienced professionals in the museum and public sectors and have some exciting partnerships and events planned for the upcoming operating season."

Meades will argue that the Norgoma has significant cultural and heritage value that will be especially relevant if the United Nations Educational, Scientific and Cultural Organisation agrees to designate the St. Marys River as a UNESCO heritage site.

From 1950 to 1963, the Norgoma transported passengers and freight along the so-called 'Turkey Trail' between the Sault and Owen Sound.

The boat served as a car ferry between Tobermory and South Baymouth after the Trans Canada Highway was finished in 1963, until it was replaced by the Chi-Cheemaun in 1974.

Parks Canada has indicated it's not interested in having the Norgoma relocate to the Sault Ste. Marie Canal National Historic Site because the ship has little to do with the park's mandate.

A location near the Canadian Bushplane Heritage Centre has been rejected because dock space and water levels were inadequate.

A pier adjacent to the former downtown Sault Area Hospital site might work but the cost of servicing the site with electricity, sewers, telecom services and mooring bollards is estimated at $185,000 to $195,000.

If the city decided to decommission the Norgoma itself, the cost would range between $200,000 and $500,000-plus, depending on how much of the demolition work is done at the marina.

A city-commissioned report by STEM Engineering found that the Norgoma has little potential for being re-purposed as a barge or another kind of boat.

The costs of demolition and removal would exceed any salvage value, in part because of hazardous materials including lead paint, oil and asbestos.

Other options include further municipal investment in the Norgoma, or just maintaining the current situation with no city support.

Vair will ask councillors today to pursue a deal with Gregos-Nicols and to approve spending $35,000 to get the Norgoma out of the marina.

If no deal can be reached with the Chicago businessman, Vair is recommending the city demolish and remove the Norgoma itself.

Today's City Council meeting will be livestreamed on SooToday starting at 4:30 p.m.

Alert cancelled but search continues for suspect on Manitoulin Island
May 9, 2021 12:32 AM