In accepting a proposal to cut 20 firefighter positions over the next three years, the mayor says that city council sent a clear message to the 10 associations and unions that represent city workers.
Oct 27, 2015 12:56 AM By: Kenneth Armstrong 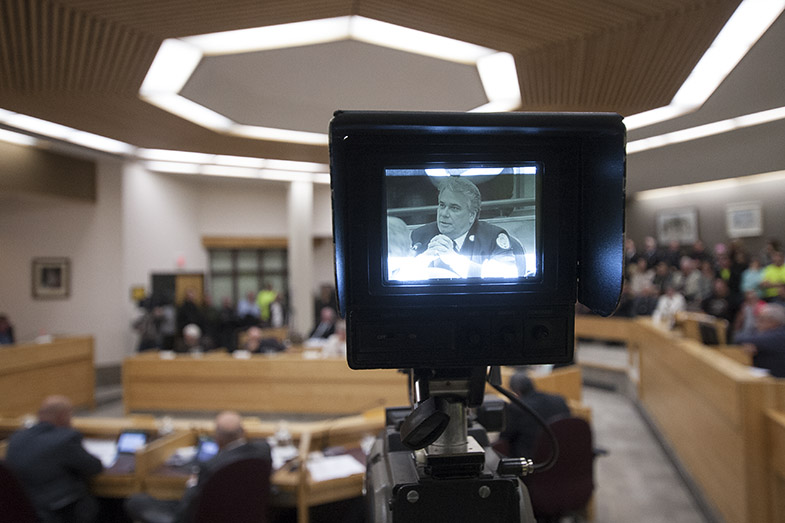 In accepting a proposal to cut 20 firefighter positions over the next three years, the mayor says that city council sent a clear message to the 10 associations and unions that represent city workers.

“They have to deal with management,” said Mayor Christian Provenzano.

City council has accepted a proposal put forth by Fire Chief Mike Figliola to cut 20 firefighter positions within the next three years in a realignment of fire services.

Council heard an apposing viewpoint by the local firefighter’s association during the meeting, with the gallery seating filled with firefighters and their supporters.

An additional room was opened to handle the overflow of supporters.

Marty Kenopic, president of Sault Ste. Marie Professional Fire Fighters Association (SSMPFFA) made a presentation asking councillors to ‘hit the pause button’ until a comprehensive risk assessment could be made, giving council more information before making their decision.

Immediately after the meeting, Kenopic said he was shocked by the passing of the resolution.

But earlier in the meeting, after taking questions from councillors, Kenopic was asked by Mayor Provenzano if he had sent an email to SSMPFFA membership discouraging them from becoming involved in the process and answering questions from the fire chief.

Kenopic agreed he had sent such an email.

Many councillors were disappointed the association and city staff did not sit down to discuss the realignment of fire services.

“I’m disappointed the union and management did not sit down and discuss this before coming to council,” said Ward 1 Councillor Paul Christian during comments before the vote.

Eight councillors voted for the motion with three against during the recorded vote.

Had the vote passed it would have sent the wrong message to associations and unions who are employed by the city, said Provenzano.

“If any of them say, ‘we don’t really like this, so we are going to call the councillors and lobby them and create a bit of a [public relations] blitz, and hopefully we will get them to change their mind,’ and we do? Then we send a message to the associations and unions that if they don’t like what management is doing, just come directly to us. The city doesn’t work that way,” said Provenzano.

“We have to send a clear message to all of our bargaining units, to all of our employees, that they have to deal with management. Then we will be responsible that management is conducting themselves properly,” he added.

Because the cuts are being made by attrition over the next three years, no firefighters who are currently working will be losing their job.

The mayor hopes the association will now sit down with management to work together in the future.

“That’s what I want to happen,” said Provenzano.

Although the association made an argument to defer the resolution, the mayor said no compelling case was made to not follow the chief’s recommendations.

“I lost track of how many questions we asked [the fire chief] when it exceeded 80. He didn’t have a free ride tonight,” said Provenzano.

Figliola said he uncovered ‘a major problem’ when doing his comprehensive review shortly after taking on the job last February.

In his report to council, Figliola showed EMS calls were up 100 percent since 2004, while actual fire calls were down.

EMS are often unavailable and the city is exposed to significant penalties and possible criminal negligence proceedings as a result, Figliola stated in his report.

The fire chief appeared to pin the problem on previous city management.

“I found things that didn’t just happen yesterday. If someone had slowly dealt with this over the last 10 years we wouldn’t have had this wholesale change. Unfortunately when you avoid, things get worse and worse. We have this risk — which is clearly identified — that certain people chose not to deal with,” said Figliola.

The planned reduction of 17 firefighters on duty to 13 at any one time will become effective next month.

Once EMS paramedics are hired they will utilize the reserve ambulances, with no immediate extra cost to the city.

Figliola hopes the EMS supervisors will be in place by the new year.

Because EMS are partially funded by the province, the city will reap cost savings as result of the realignment.

“In three years we will probably see a savings of $800,000 department-wide,” said Figliola.

Provenzano said tonight’s meeting was among the most challenging in his first year as Mayor.

Votes for the motion:

Did not vote due to conflict: