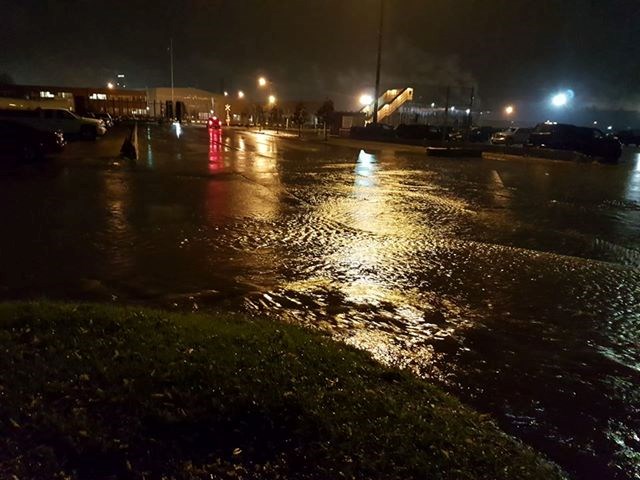 Flooding in the Albert West area is shown in this file photo from October 11, 2018. Photo submitted by Cassandra Archibald

The Sault Ste. Marie Region Conservation Authority (SSMRCA) is looking at all of its options for cost-cutting measures after the organization saw its flood management funding slashed by more than 48 per cent by the province in this year’s budget.

During last night’s SSMRCA board meeting, it was decided that the local conservation authority will implement a spending freeze, which includes cutting most travel and training costs within the organization for the foreseeable future.

“We’re going to try and find as much as we can internally to be able to continue,” said SSMRCA General Manager Rhonda Bateman. “It’s not that our entire operations are ceasing or anything like that - we do have to find efficiencies to the best of our ability at this point.”

Flood management will not be scaled back or cut as a result of the provincial budget, which resulted in funding cuts of around 50 per cent, on average, to all 36 conservation authorities in Ontario.

“We are not going to cut the maintenance and flood control program. That can’t be done,” Bateman said.

While SSMRCA will carry out its regular maintenance, other projects - such as major infrastructure projects for its flood control system - will be placed on the backburner indefinitely until SSMRCA can figure out where the money for extra work will come from.

“This year we’re doing our regular maintenance, which is a big enough job,” Bateman said.

Meanwhile, the organization’s mandated regulatory programs won’t be impacted, as funding for those come from municipal dollars for the most part.

“We self-generate through fees, but we don’t make enough money to have it stand alone,” she said. “Our development is not like southern Ontario - like the Greater Golden Horseshoe. There’s not new subdivisions being established every week.”

“We don’t have the mass of actual development that other areas of the south have.”

For now, SSMRCA will continue to focus on its primary goal of public safety.

“I refuse to lessen our standards,” said Bateman. “What kind of standard are we going to shoot for if we don’t look after public health and safety?”

It was also decided during Tuesday’s board meeting that the local conservation authority will also write Sault Ste. Marie MPP Ross Romano in order to express its concern over the recently announced funding shortfall.

“We’ll be sending letters to our municipalities as well, just assuring them that our level of service, at this point, isn’t going to be sacrificed,” said Bateman. “The province made a decision, and in my point of view, it was the wrong one - but we have to live with the fallout.”

Flood management funding cut by nearly half for local conservation authority
Apr 16, 2019 5:00 PM
Comments
We welcome your feedback and encourage you to share your thoughts. We ask that you be respectful of others and their points of view, refrain from personal attacks and stay on topic. To learn about our commenting policies and how we moderate, please read our Community Guidelines.