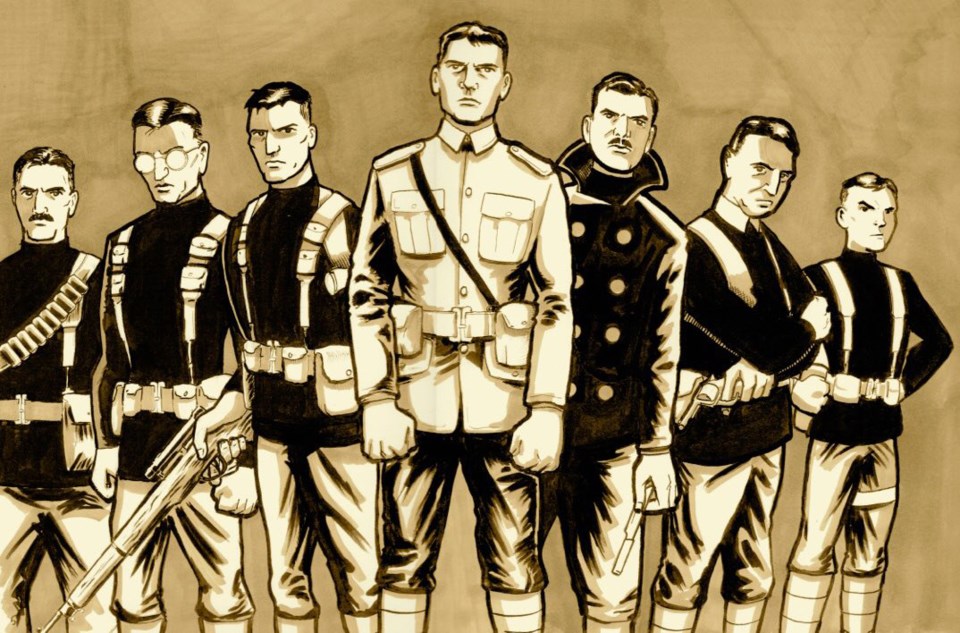 Col. John McCrae leads a group of seven historically-significant Canadians in a new online comic book coming out in April.

Col. John McCrae is teaming up with six other lions of Canadian history to help save the world in a new comic book.

The Guelph author of In Flanders Fields is the central character in a work of historical comic book fiction by a pair of Guelph residents titled Group of 7.

It will be available online in early April.

In the comic, McCrae leads six significant historical figures in an elite and secret World War I fighting unit that goes on a secret mission to help the allied cause at the battle of Vimy Ridge.

All seven actually served in World War I in various capacities.

Group of 7 is the creation of Guelph's Chris Sanagan and longtime friend Jason Lapidus. Sanagan, an archivist by trade and history buff at heart, came up with the story and research, Lapidus, a longtime art teacher who now owns his own local communications consulting firm, does the drawings.

The two met several years ago when introduced by their then-girlfriends, now-spouses.

Sanagan, a self-described history buff, started researching the idea three years ago during his daily GO Train rides to Toronto, where he works at Archives Ontario.

"I started to realize there was a whole group of soldiers who were all in Europe in the war at the same time who defined many aspects of 20th century Canada," Sanagan said.

He said all seven, either before, during or after the war, crossed paths to various degrees.

"I started piecing the team together. They all have a role to play on the team," he said.

"It's asking "what if?" If we can put all these characters in one spot, a decisive moment in Canadian history, it's fun to play with these lions of 20th century Canada and beyond, how fun would it be if they previously knew each other or were friends? "

Sanagan is a big fan of the "team" superhero comic books and action movies.

"I often think about it as an 80s action movie: Reverent to the history, but it is an action superhero comic book, just with historical Canadian figures."

The characters are all shown in a positive light, Sanagan believes. He and Lapidus aren't trying to be controversial or negative.

"From April on, online followers of the comic will have access to new content weekly," Sanagan said.

"It's fictional history but you can flesh it out with real people, real events. But first and foremost it's fun."

It is fiction, with entertainment and fun key ingredients, but it's also meant to use Canadian history in a fictionalized way that will hopefully spark the reader's historical curiosity and imagination.

"I often think about it as an 80s superhero comic book. But with Canadian historical figures," Sanagan said.

One of Sanagan's hopes and goals is that the fictionalised story will motivate people to learn more about historical figures and facts, with links being provided on the story's web site.

"I hope that eventually it will be a gateway used by people, a portal, to explore more about Canadian history and the characters and for people to educate themselves."

Sanagan wanted to be respectful to the characters and reached out to a descendant of John McCrae and the family of Francis Pegahmagabow. Both were supportive, with Pegahmagabow's family supplying information that helped in developing the character in the comic.