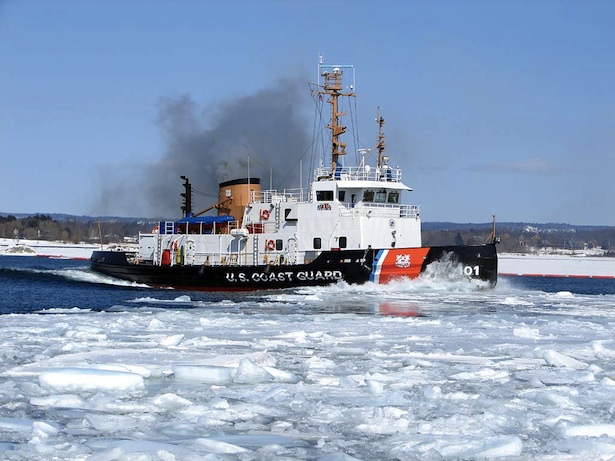 An additional 5,597 hours of ice breaking established and then maintained tracks through the ice choked waterways of Georgian Bay, Straits of Mackinac, Green Bay, southern Lake Michigan, St Marys River, and across Lake Superior in its entirety.

An estimated 33 million tons of dry bulk and liquid cargoes, valued at $1.2 Billion U.S. dollars, were shipped during the 160 day operation.

These commodities were crucial to sustaining industrial production and power generation for the Great Lakes region during the winter months.

Statistically, this ice season will be one for the record books.

Although official statistics have not been released, it is reported the 2013-14 season produced the thickest and most expansive ice cover the Great Lakes has experienced in 35 years.

Under normal ice conditions, an up bound movement is executed in 12 hours.

In March 2014, the first west bound crossing of the Straits of Mackinac took four days.

Under normal conditions the voyage would be completed in 12 hours.

Under normal ice conditions, the typical crossing would take 24 hours to complete.

The first load of iron ore (Two Harbors, MN to Gary Harbor, IN) took 13 days to deliver, which is normally a three day voyage.

Further inquiries can be made by phone to Sault Vessel Traffic Service at (906) 635-3232 or via email at SOOTFC@USCG.MIL.