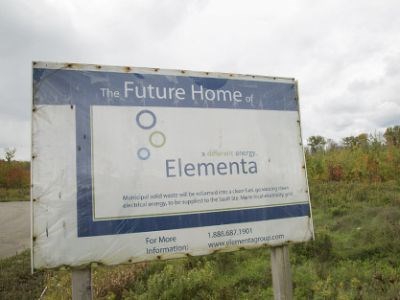 A sign for the proposed site of the Elementa plant, as seen on Oct. 8, 2014 in the city’s west end. (SooToday photo)

Sault Ste. Marie City Council will be asked tonight to repurchase a 15-acre industrial property it sold in 2014 to Elementa Group Inc.

The site is at 903 Base Line Rd., immediately adjacent to Flakeboard’s melamine lamination plant, and is serviced by a cul-de-sac, Wood Park Court.

Elementa planned to build an energy-from-waste commercial plant there.

"This project did not proceed and the property has since been acquired through receivership by 2124732 Ontario Inc. based in Woodbridge, Ont.," says Don McConnell, the city's director of planning and enterprise services, in a report to Mayor Provenzano and councillors.

Originally owned by Algoma Steel, the property is serviced by rail and also has municipal water and sanitary sewer services.

"The recent report by Dillon Consulting on the city’s population and employment projections, and associated land needs, indicated that the city has more than sufficient designated and zoned industrial land for the foreseeable future," McConnell says.

"The difficulty is there are few larger properties that are readily available. To significantly improve this situation, it is recommended that the city reacquire the property previously sold to Elementa."

"This property is fully serviced and has access to both rail and a major truck route. In addition, the city owns an additional 17 hectares (42 acres) immediately south of this property. As it may be preferable for any potential investor to acquire both properties, it is recommended that the city re-acquire the former Elementa property from the current owner," McConnell suggested.

Today's meeting of City Council will be livestreamed on SooToday starting at 4:30 p.m.