A final recommendation on the parking issue is expected to be presented to council in March or April
Feb 8, 2017 11:02 PM By: Kenneth Armstrong 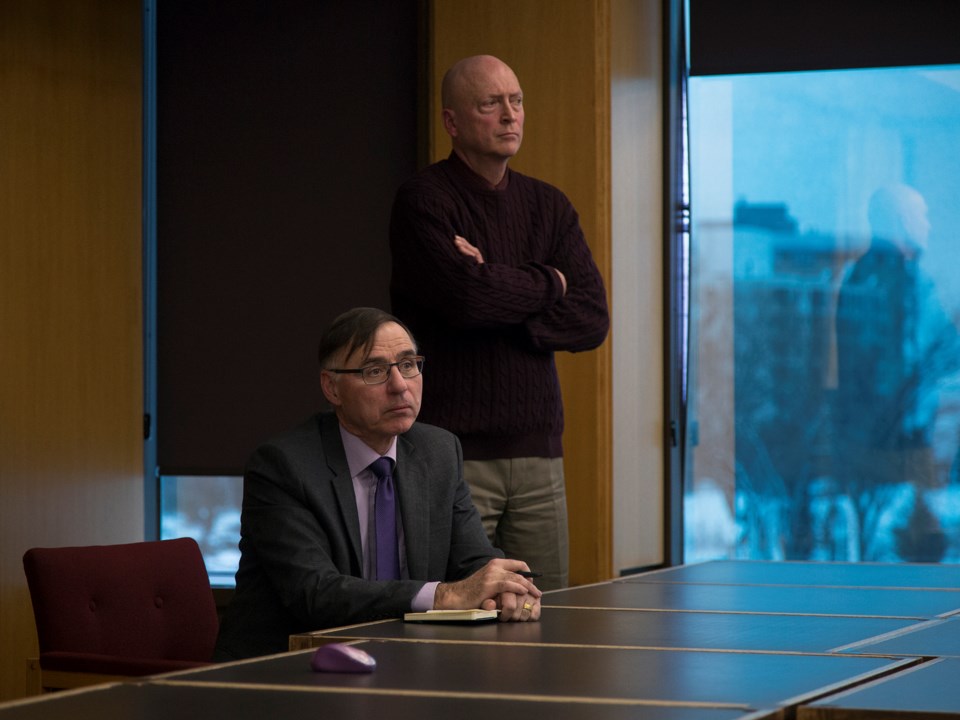 Vince Mauceri of Transforward Consulting and Don Scott, transit manager for the city, listen to concerns of local business owners during a public consultation today at the Civic Centre. Kenneth Armstrong/SooToday

A consultant using statistics and charts in an attempt to justify the potential discontinuation of free downtown parking was met with the raw emotion of business owners who are fearing the move would be the last nail in the coffin for the city’s downtown.

During a public consultation held tonight at the Civic Centre, Vince Mauceri of Transforward Consulting presented the results of a recent online survey conducted to determine how best to cover the estimated $190,000 shortfall caused by the two-hour free parking at the city’s 10 downtown public lots.

About 1,700 people responded to the online survey, 82 per cent of which disagreed with the concept of discontinuing the free two-hour parking.

The annual shortfall, which varies from year to year, is a result of city council’s 2005 decision to suspend a parking levy charged to downtown businesses, said Don Scott, manager of transit and parking for the city.

“At the same time, the two-hour free parking should have been taken away during that time as well, because the parking levy financed the two hours of free parking,” said Scott.

Downtown business owners attended the public consultation to voice their concerns about the possibility of losing the two-hour free parking in the lots.

“I have a real hard time seeing how this isn’t going to directly hurt my business and drive my customers to my competitors up on Great Northern Road — that can park in a big box store parking lot or stay at home and shop online or drive across the river,” said Kristi Cistaro, owner of Stork and Bundle.

In a usage study presented during the consultation, statistics showed even the busiest downtown lots were utilized at less than 60 per cent capacity on average.

“Now you’re saying, ‘things are bad, we’re going to make them worse,’” said Weeks of the idea of discontinuing the free two-hour parking.

“Queen Street is hurting. Some say it’s dying,” he added.

Peggy Lauzon, owner of Aberdeen Group, said the conversation should be centered around supporting small businesses.

“There is a much bigger issue of what happens when we have paid parking and downtown businesses close and you don’t have that city tax base anymore?” she said.

“We are not the call centres that pick up and leave, we are not Essar Steel that doesn’t pay their taxes. We have to get behind small business in this town, I think. This is just, to me, the last nail in the coffin for small businesses, this idea,” added Lauzon.

Marnie Stone, owner of Stone’s Office Plus, said she would like to see free two-hour parking extended to include the 346 on-street metered parking spaces.

I would love to see (Queen Street) become two-way again, so we can have two-way traffic. Remove the trees and put free two-hour parking on either side,” she said.

Rory Ring, CEO of the Sault Ste. Marie Chamber of Commerce, said city hall is looking at the problem through the wrong lens and should treat the shortfall as economic-enabling infrastructure.

“I think we need to change a little bit of the language around this particular issue, (to) not look at $190,000 as an expense, but look at it as an investment,” said Ring.

He contrasted the shortfall to council’s recent decision to reclad the exterior of the Civic Centre at an estimated cost of $6.5 million, which he suggests the city cannot afford.

“There is, to my knowledge, a quick fix of $400,000 — that would get us through the next five years by temporarily sealing the elements that are under consideration here at city hall. If you took that $6 million and invested it in downtown parking, that’s 30 years of free downtown parking,” said Ring.

Ward 3 councillor Matthew Shoemaker, who penned the original motion to look into the parking shortfall, listened to the business owners air their grievances.

“Everybody should be concerned about what the effect of this will be. I guess the next step is to figure out a way that will, more or less, satisfy all parties,” said Shoemaker.

He was joined by Ward 5 councillor Frank Fata during the afternoon consultation, a second consultation was held in the evening.

No final decision to cease the free parking has been made at this time, said Scott, and he added that it was important to hear from the stakeholders involved.

“I know it may appear the two-hour free parking is gone and we’re going to ram it down everybody’s throat on April 1 — that’s not what’s going to happen,” said Scott.

Whatever recommendation is made, he said, will be spread out over a five year period.

Downtown Association office manager Josh Ingram said he appreciated the transparency shown by city staff in presenting the results of the survey in such a candid manner.

“82 per cent of people still want free parking. To present those numbers must have been rough when they are looking at eliminating it,” said Ingram.

In an ideal world, said Ingram, no tax would go up and the downtown would get to keep the free two-hour parking.

“This is someting we don’t need right now,” he said of the prospect of it being eliminated.

A final city staff recommendation on the parking issue is expected to be presented to council in March or April.