'It was a piece of property that we had an opportunity to purchase and to essentially take away a zoning that we don't want to see any longer' - Mayor Provenzano
Sep 15, 2020 2:30 PM By: David Helwig 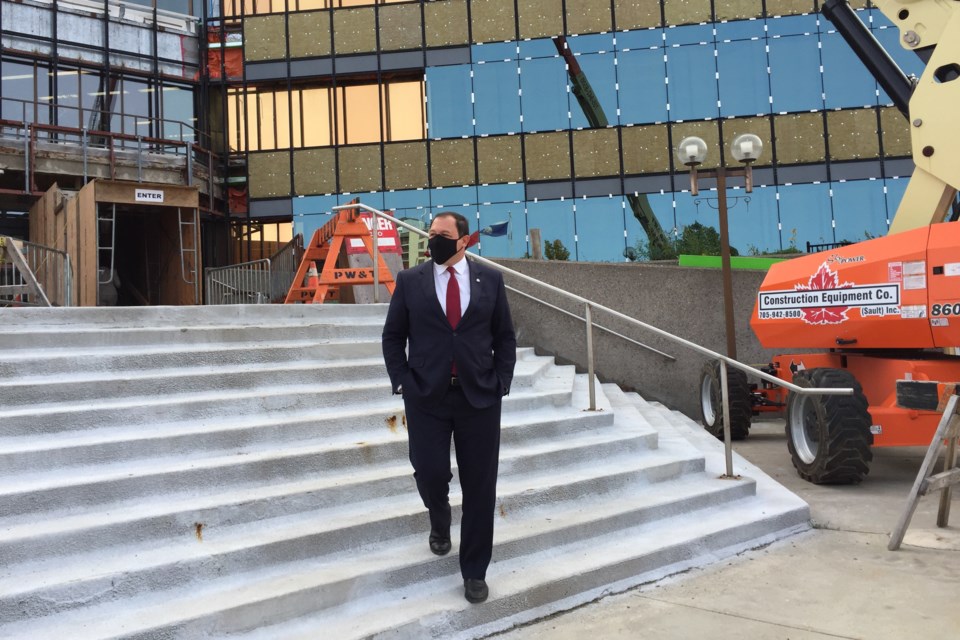 With only Ward 5 Coun. Matthew Scott opposed, City Council agreed last night to spend more than a third of a million dollars to acquire two lots on Hudson Street where Studio 10 and The Dime nightclub were once located.

It's widely agreed the properties aren't worth the $350,000 the city will pay.

"I would agree that we're paying a premium for the property. I don't think it's a significant premium," said Mayor Christian Provenzano.

But Provenzano and some councillors argued the price is warranted, especially if the purchase prevents the site from rising from the ashes as a strip club.

The nightclub was destroyed by fire last year.

Its adult entertainment parlour licence expired in January and wasn't renewed by the owner, who approached the city about selling.

"Did we get an appraisal on the property?" Coun. Scott asked at last night's City Council meeting.

"We did not get an appraisal on the property. We did take a look at what the MPAC [Municipal Property Assessment Corp.] value was," replied Karen Fields, the city solicitor.

Does the city have any idea what it wants to do with the site?

"At this time we don't have specific plans for the property, other than to purchase it and hold onto it long enough to remove the legal long-conforming use attached to the property," said Malcolm White, the city's chief administrative officer.

"The property owner reached out to the city," Mayor Provenzano said. "It was certainly something that I am comfortable taking some responsibility for."

"It was an opportunity that came to City Council to buy a piece of property, and remove the zoning on that piece of property so the next 50 years when you drive over our bridge, the first thing that you see is not a strip bar."

"When the opportunity came to us and we discussed it, staff looked at it and thought it was a good piece of property for our inventory. It is something that we might well be able to flip, and if somebody was interested in the property, they can certainly approach us about it and we'd be open to it," Provenzano said.

"I don't find value spending that kind of money to remove a zoning from a piece of property, even if we could have flipped it," said Coun. Scott.

"We can assume that MPAC isn't going to be exactly the purchase price based on demand and market. It appears we would be overpaying quite significantly. I personally don't feel comfortable spending that sort of taxpayer money on that."

Ward 3 Coun. Matthew Shoemaker expressed concern with the condition of the Hudson Street site, describing it as "unkempt."

Larry Girardi, the city's deputy chief administrative office for public works and engineering services, promised to do something about that.

"This is not a normal practice, but as this property is in close proximity to the bridge plaza, it would be appropriate for us to seed a portion and possibly plant a few trees to make it look more aesthetically pleasing for when people are coming off the bridge. If purchased, I'll have parks division make some improvements to it," Girardi said.

"I believe that this is a wise decision," said Ward 5's Corey Gardi of the purchase decision.

"I am confident in stating that a vast majority of the community does not want an establishment like that one located where it is. It's time for that property not to house that type of establishment. It is my personal opinion that establishments such as those are places where nothing really good takes place for our community. I am glad to see it go," Gardi said.

Ward 4 Coun. Marchy Bruni asked whether the adult entertainment parlour licence expired for good in January, or whether the owner might be able to re-apply.

There must be a building on the property before the owner could obtain a licence, he was advised by the city solicitor.

"It was an eyesore," Bruni commented. "I think we paid a little bit too much for it. Under the circumstances, I think we had no choice. We'll move on with this. Hopefully, there's somebody out there that wants to purchase that property for $350,000."

Ward 2's Luke Dufour pointed out that while there might be no specific city plan for the Studio 10 site, there is a municipal vision for it.

"We have a Jamestown revitalization strategy coming. This piece of property is a part of that," Dufour said.

"We have a significant development that's occurred on Mr. Porco's property at the Mill Market. We've extended the Hub Trail to this area – we have an opportunity to extend it further in the years to come. We are relocating our transit shelter to this area. We've approved a potential Gateway development and condo development to this area. The federal government has spent a great deal of money on the canal, which is also adjacent to this area. So there is a significant amount of partners joined with the city that has a vested, committed financial investment into the success of this area," Dufour said.

"It enhances all the other projects and initiatives that are happening in that area," added Ward 2 Coun. Lisa Vezeau-Allen.

"For anyone who's bought a house recently, take a look at what your MPAC value is and what your purchase price was. MPAC value and market value are two completely opposite things in today's market," Vezeau-Allen said.

"If we're concerned about recouping our investment, it's money well spent. I think we will most certainly be able to recoup some of that investment."

Vezeau-Allen expressed hope that the city will hang on to part of the Hudson Street property, to link James Street to the city's core.

"I think it's a very good idea to purchase the property," said Ward 1 Coun. Paul Christian.

"We may have a vision but you really need to develop the plans. I think the price we paid for this property is high. I agree we need to buy it, but I think we could have negotiated a lower price."

"To say that we're trying to improve the area, if that's our goal, then there are several other properties that need to be purchased as well."

"I wouldn't pat ourselves too hard on the back because really this was about purchasing property to eliminate that designation," Coun. Christian said.

"This is an area of the city that we all recognize needs our time and our care and our investment," said Mayor Provenzano.

"I think removing the designation is certainly a motivating factor, but I think it's a lot broader than that. I think there are a lot of other positives that come from this. I think history will look back at this decision as a wise one."

"I think we're probably paying a little bit more than market value but I think there's value in that."

In other west-end news, council agreed last night to spend $300,000 to acquire a strip of land along the north side of the Gateway property where the Algoma Canyon Tour Train used to run.