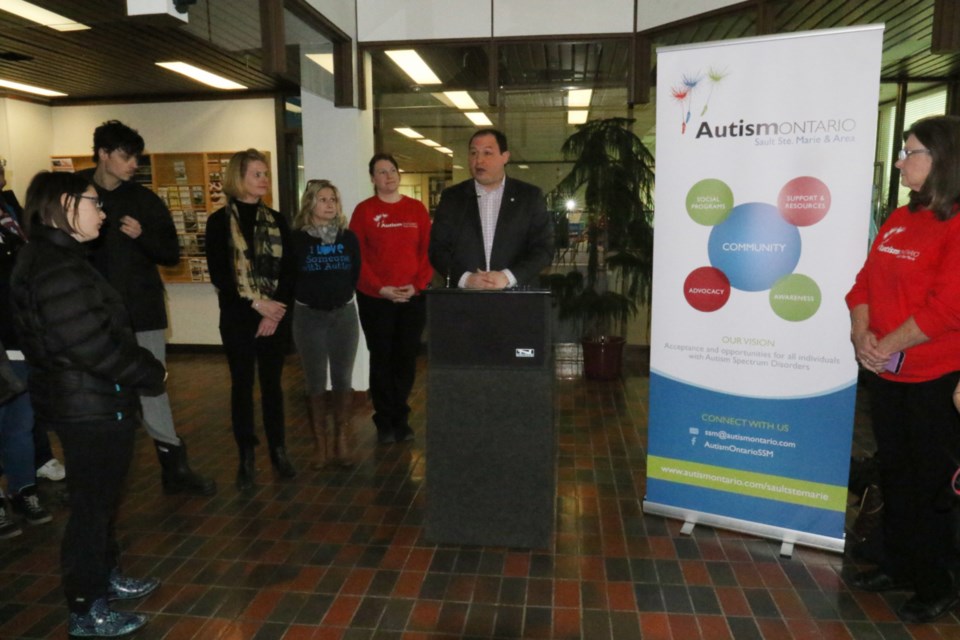 “I think it’s a good day to represent that there are struggles out there that parents and individuals with autism deal with every single day, but it’s also a day that we’re here to triumph on the milestones that we’ve succeeded through in the year,” said local Autism Ontario president Lindsay Collins.

On the eve of World Autism Awareness Day, the city passed a resolution during Monday night's council meeting requesting that the Ontarians with Disabilities Accessibility Advisory Committee strike a subcommittee dedicated to the development of a municipal autism strategy.

“We will create a terms of reference - now that it’s been approved - for the subcommittee,” said Ward 2 Councillor Lisa Vezeau-Allen following the flag raising ceremony. “The whole idea is really, let’s create an inventory of what it is in the community, let’s identify gaps, and also let’s see what we can do as a municipality, and definitely in terms of planning and these sort of things.”

Last night’s motion in council was personal for Vezeau-Allen – her 16-year-old son, Aidan, is on the autism spectrum.

Both Vezeau-Allen and mayor Christian Provenzano stressed to SooToday that the municipality itself is not in the business of creating services for people affected by autism.

“We’re not creating services - it’s really about getting everything together so that it [subcommittee] can be a one-stop-shop for information,” said Vezeau-Allen. “Right now it is a maze if you’re trying to coordinate autism services.”

Provenzano says the municipal autism strategy is more about looking at ways of enhancing pre-existing programs and infrastructure to better serve those affected.

“It’s about looking at all of the services provided across the community municipally, and making sure those are done in a way that’s inclusive,” Provenzano said.

When asked for a take on changes to the Ontario Autism Program rolled out by the province this past February, Vezeau-Allen says that she feels for the families affected by those changes - changes that one family told SooToday will break local families financially.

Meanwhile, Collins says that she'll continue to focus on her own family.

“I think parents will still do their very best,” Collins said. The government can do what they want, but myself, I will still do mama bear all the way with my kids."

Vezeau-Allen points to the municipal autism strategy as a potential vehicle for economic development opportunities down the road.

She says that while living in Colorado, she regularly witnessed people with disabilities working for employers in the name of social enterprise.

I listen to a lot of parents who have young adults on the spectrum, and there is a gap – there’s really lack of opportunities, lack of services,” she said. “So in creating a strategy, we as a municipality can say, ‘hey, we know that there’s these gaps,’ and perhaps then, by communicating that to the greater community, maybe we’ll see some things start to happen such as social enterprises.”

Vezeau-Allen will now work with city accessibility coordinator Nancie Scott in order to hammer out the terms of reference for the subcommittee before seeking out members and engaging in public consultations.

“I’m hoping that this strategy at least give families and individuals hope knowing that their municipality recognizes them,” Vezeau-Allen said. “We see them, we know that we need to do things better.”