Ward 6 Councillor Ross Romano is planning to call the Civic Centre first thing Wednesday morning to thank them for removing the last of the Queen Street snowbanks.
Jan 18, 2017 12:48 AM By: David Helwig 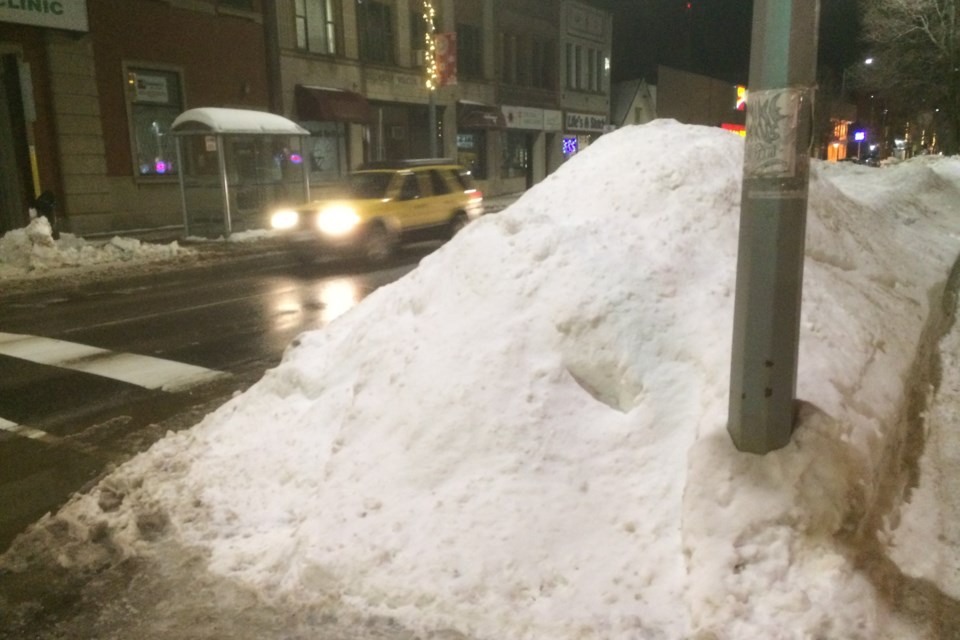 This snowbank in the 500 block of Queen Street East, photographed at 7:30 p.m. on Tuesday, will be gone by Wednesday morning, members of the Queenstown BIA were told tonight. Photo by David Helwig, SooToday

The last of the annoying snowbanks blocking the way to downtown businesses are expected to be removed overnight Tuesday night.

Ward 6 councillor Ross Romano told tonight's meeting of the Queenstown Business Improvement Area that public works director Susan Hamilton-Beach and deputy chief administrative officer Larry Girardi have assured him 20 per cent of downtown snowbanks were cleared Monday night and "the remainder of Queen Street is to be done tonight."

Romano promised to call the Civic Centre first thing Wednesday morning to thank them for a job well done.

Romano, who will run for the Progressive Conservatives in the upcoming provincial byelection, pointed out that city staff had proposed cutting $97,000 in snowbank-removal funds this year, but he successfully fought to have that money returned to the budget.

That turned what would have been a 4.23 per cent levy increase into a 4.25 percent hike.

"Had we not done so," Romano said, "we would have had one snowbank removal for the entire season on Queen Street. Which we've already had. Which means none of these banks would have been removed at all."

By spending the additional $97,000, Saultites get two or three snowbank removals a year, he told the business association.

"Given what we're seeing now, we desperately need it, and will need it in the future, absent a heat wave," he said.

There was some discussion tonight about the possibility of providing a snowblower to Matt McMinn, Queenstown's like-a-boss snow shoveller.

City staff will be consulted after concern was expressed that using a snowblower might increase the BIA's liability if someone slips in the snow.

If he has time after that, McMinn clears snow from areas in front of buildings and near parking meters.

General manager Josh Ingram said it was necessary to close the meeting because he had some "parking authority documentation" that was "private and confidential."