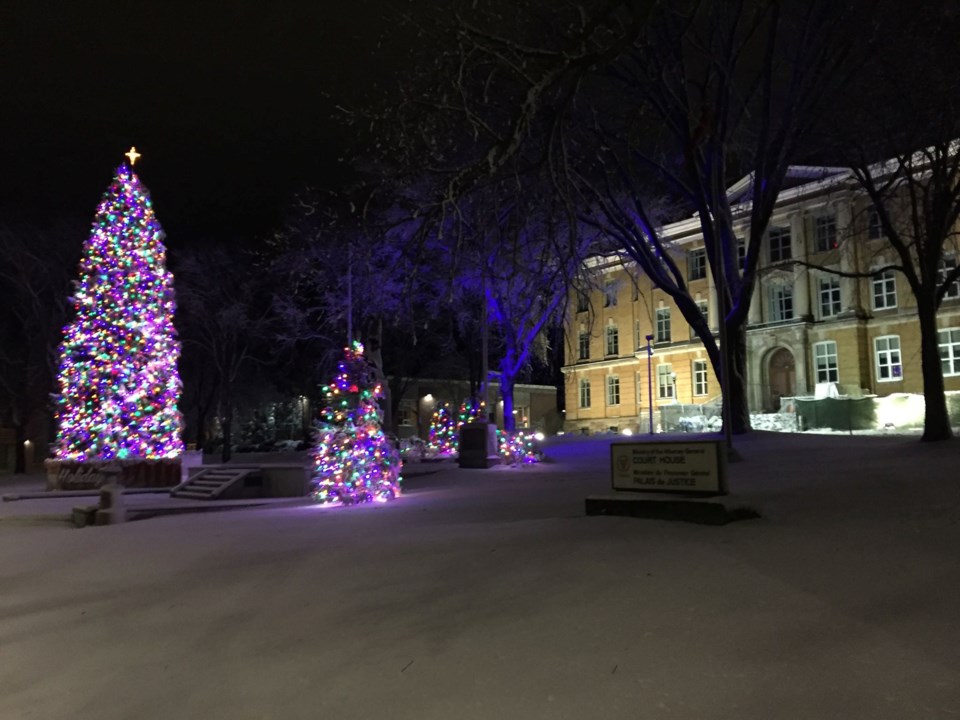 In front of the courthouse, Wednesday Nov. 27 around 9:00 p.m. No sleigh in sight. David Helwig/SooToday

Santa Claus's sleigh and other holiday decorations may return to the courthouse property this festive season after all, MPP Ross Romano says.

The MPP says the annual tree lighting ceremony at the courthouse may also be salvaged, after "frequent conversations" with Attorney General Doug Downey over the weekend.

"I want everyone to rest assured that the courthouse will continue to be a place for future holiday tree lighting ceremonies and decorations and a gathering place for our city to be proud of for many years to come," said Romano, in an open letter delivered to SooToday last night.

This announcement comes after news that the city was asked by the provincial property management agency to move most of its Christmas-themed decor from its usual home in front of the courthouse.

Romano said he was frustrated by the situation and confirmed with Larry Girardi, the city's Deputy CAO of Public Works and Engineering Services, that so long as he could obtain a direction from the Attorney General, the decorations could be immediately returned to the courthouse property.

The Deputy Attorney General, Paul Boniferro, confirmed in an e-mail to Romano over the weekend that "The Ministry will facilitate the return of the decorations should the city wish to return them."

The email went on to say that "The tree with the decorations (if they are returned) will remain lit for the duration of the holiday season this year and in future years, and the Ministry will continue to work closely with its partners at the court and the city to prevent any similar incidents going forward.”

Romano says so long as the city wishes to return the decorations to the courthouse property, it has permission to do so.

It is still unclear exactly why the city was asked to remove the decorations in the first place.

Riley Smith has been with Village Media since November 2018. She holds a double Honours Degree in History and Political Science from Algoma University, and a Postgraduate Certificate in Public Relations and Event Management from Sault College.
Read more

Christmas decorations removed from courthouse lawn
Nov 29, 2019 4:20 PM
Comments
We welcome your feedback and encourage you to share your thoughts. We ask that you be respectful of others and their points of view, refrain from personal attacks and stay on topic. To learn about our commenting policies and how we moderate, please read our Community Guidelines.