Check out the new video scoreboard at GFL Memorial Gardens! 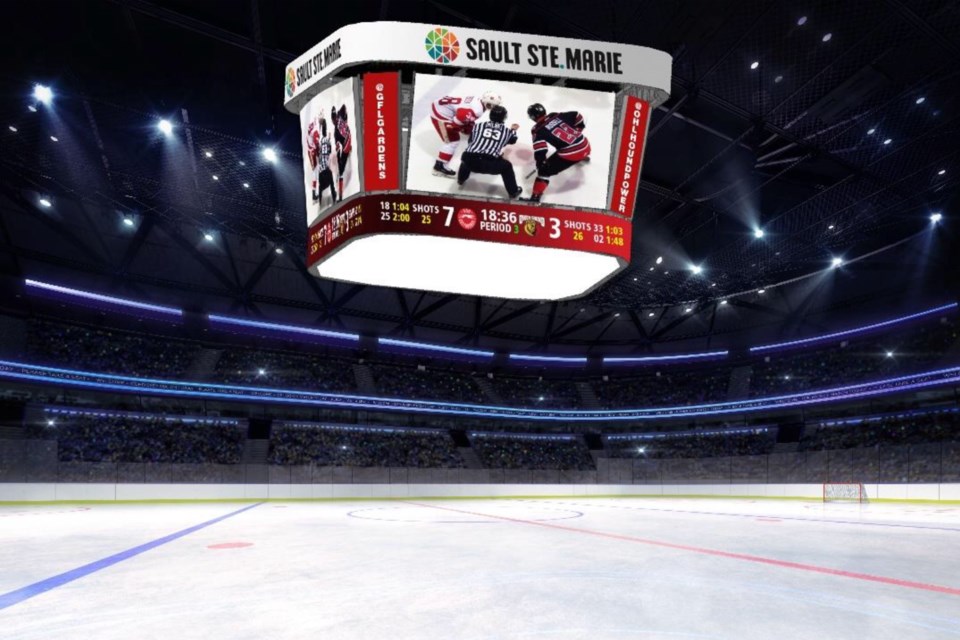 OES Inc. of London, Ontario has been selected to supply this $560,000 videoboard/score clock to GFL Memorial Gardens. (artist depiction supplied)

A little-heralded Ontario success story in manufacturing video scoreboards for major-league sports venues has been chosen to supply a $560,000 video board/score clock to GFL Memorial Gardens.

City Council will be asked Monday to award the job to OES Inc. of London, Ontario.

Founded in 1980, the company initially cut its teeth on a diverse range of electronic applications including carillon bells, corn dryers and snow-making process control systems for ski resorts.

It started making scoreboards in the 1990s.

Today, its scoreboards can be found at:

The new video board/score clock will be paid for and operated by Soo Greyhounds Hockey Club.

Maintenance costs will be paid by the city.

The Greyhounds will pay for the new technology with advertising revenues, with the city forgoing its usual 10 per cent piece of the ad action for the next decade.

The reliability of the existing scoreboard/clock has been a concern since the north panel went blank during last year's Hounds home opener.

"The viewing experience of an OES LED video display will add a new level of excitement to events at the facility and draw everyone watching into the action moment by moment," promises Brent Lamming, the city's director of community services.

"It will increase fan engagement and return on investment through crowd prompts and multiple sponsorship opportunities displayed in multiple ways on the LED displays.

OES Inc.'s bid was selected by city purchasing staff over other companies:

"As part of the procurement process, an auxiliary clock is included in the total purchase price and will be installed for recreational programming," Lamming says in a report to Mayor Provenzano and City Council.

"Staff and the club have decided that installation of the new video board will occur at the completion of the 2019-2020 season to have in place for the beginning of the 2020-2021 season," he added.

Monday’s City Council meeting will be livestreamed on SooToday starting at 4:30 p.m.