Can you spot the guy with an assault rifle in this photo? 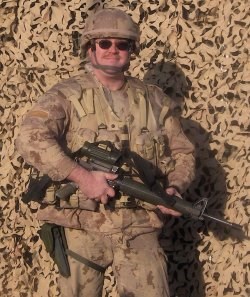 The local soldier writes from Kandahar in Afghanistan, where after several months of work-up training he is now serving in operation with the Canadian Forces.

As some of you know, I am writing from Kandahar.

I thought it would be a good idea to write and tell you about my experiences.

In this way, we can stay connected, and it won't feel so far away.

I will tell you up front that due to operational security, there are a lot of details that I cannot tell you.

Email and internet are all monitored, and anything that I send is filtered through by people that would do us harm.

At 2 a.m., Bombadier J.P. Gravelines arrived at my home to start the trip.

A decent snow storm was underway, and we loaded all of my gear, and started a long journey.

When we went through Toronto, I stopped in briefly to have a coffee with my brother-in-law Major Dan Eustace, and his wife Kathy.

I checked into my flight from Trenton, and was surprised that they still inspect luggage and conduct metal detector checks for a military flight.

Wheels were up at approximately 6:30 p.m. Eastern Standard Time (EST).

After a stop in Cologne to change flight crew, and get some fuel, we landed at Camp Mirage at approximately 9 a.m. EST which is a location in the Middle East where Canada has a support base.

In this location, there is a nine hour time difference, and it was 6 p.m. and just getting dark.

I was fortunate to have had a window seat, and I was able to enjoy the scenery.

Although I had no idea where I was flying over, I enjoyed views of coastlines, snow-peaked mountains, and terrain unlike any I had ever seen before.

We flew over Dubai, and the sun was setting over the water.

It reminded me of the sunsets at my property on Lake Superior – the only difference was all of the ships in the water.

I also I had a magnificent view of the Palms Hotel, and the man-made Palms ´islands' that were created a few years back.

As I descended the stairs from the plane, my eyes were immediately drawn to the soldiers carrying flags and marching away from a C130 Hercules.

Under lights, and with a bagpiper, they were obviously practicing for a ramp ceremony.

Flags in front of the buildings were all at half-mast.

We were escorted into a building, and briefed that on that day there was an improvised explosive devise (IED) strike in Kandahar, one soldier was killed, and they were preparing for the body to arrive the next day.

This brought home the reality of where I was, and what we are doing.

We had a quick briefing, we were issued the ballistic plates for our fragmentation vests, and provided quarters for the night.

The temperature was approximately 20 degrees Celsius, and it is very comfortable here.

I had hoped to meet with my friend Paul Ness when here, however, for operational security reasons, people are not permitted to depart the camp.

Phones, internet, and all communications from the camp are restricted.

Reveille at Camp Mirage was at 4 a.m.

Manifest lists were verified, baggage was loaded onto pallets, and we had a decent breakfast.

The weather was cool – approximately 10 degrees Celsius in the morning, and certainly not a cloud to be found anywhere.

It is an interesting environment where you can store things outside overnight and know with certainty that it will not rain, and it really will not snow.

I do look forward to going back there.

I understand that at the end of the tour, I will spend a few days in the area.

We were issued our weapons, ammunition, and a box lunch, and we loaded onto the C130 Hercules.

We were very cramped on board the plane.

With the frag vests, tactical load bearing vests and helmets, we were stuck into seats where we literally were pressed in on both sides with other passengers.

It was a three-hour flight, and I managed to finish reading the novel Kite Runner.

I recommend reading this book to provide a decent background of Afghanistan's recent history, and a glimpse into the culture.

Our flight landed at Kandahar Airfield shortly after 11:30 a.m.

It was brilliantly sunny, and cool, but very nice.

I was greeted by Major Christian Beaudin – a “Van Doos” from the reserve unit in Laval, Quebec.

We spent the day clearing into the base, and moving into my room.

The room is approximately 20 feet by 20 feet, and has four beds.

This is home for the next six months.

After some clearing in processes, as it was New Year's Eve, I went to the recreation hall known as “Canada House” and enjoyed a non alcoholic beer, but could not stay up until midnight.

I spent the first week on the ground here getting comfortable with my surroundings.

It is a completely foreign environment.

We are right beside the runway, and all kinds of aircraft are always moving in and out.

It is a bit surreal being in a real operation.

After training for 23 years, and always having everything be training scenarios that are fictitious, it takes a bit to sink in that this is real.

In my next letter, I hope to describe the camp and what it is like here in the winter.