As Ward 3 Councillor Derik Brandt's seat sat empty Monday night, Sault Ste. Marie City Council voted against calling a by-election to replace him. Instead, Council intends to appoint Brandt's successor just before its next meeting on August 12.
Jul 23, 2002 1:00 AM By: David Helwig 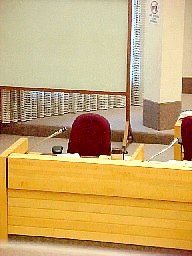 Instead, Council intends to appoint Brandt's successor just before its next meeting on August 12.

The City will run advertisements in the Sault Star and Sault This Week seeking applicants for Brandt's position, which became vacant after he accepted a job in Thunder Bay.

Council will review the names submitted and is expected to appoint one individual at a meeting 30 minutes before its regularly scheduled meeting on August 12.

It's possible the individual could be allowed to occupy Brandt's seat immediately, but some concern was expressed about having the new councillor voting on items before reviewing the agenda, so the appointment and swearing-in is more likely to take place at the end of that meeting or at a subsequent date.

Manzo and Turco wanted a by-election

The decision to appoint Brandt's successor was supported by all councillors present except for Ward 4 Councillor Lou Turco and Ward 6 Councillor Frank Manzo, both favouring a by-election.

"Let the people decide," Manzo said, arguing that the situation is quite different than that created by the death of Ward Six Councillor Tom Austin, when a bylection was called and Manzo was elected to fil the position for the remaining two years.

"Councillor Brandt quit in mid-term, if you know what mid-term means," Manzo said.

As a result of last night's decision, Manzo told his fellow councillors he has "the right to charge each of you with discrimination."

Both ways are democratic - Caicco

Ward 1 Councillor James Caicco pointed out that Ontario's Municipal Act offers Council the choice of either appointing replacement councillors or holding a by-election.

Both routes are democratic, Caicco said.

Ward 6 Councillor Peter Vaudry mentioned that he recently met with Bryan Hayes, who ran a close third behind Brandt and Pat Mick among seven Ward Three candidates in the November, 200 municipal elections.

Vaudry said he was impressed with Hayes.

Council is under no obligation to consider unsuccessful candidates from prior elections.

The headline indicated that City Clerk Donna Irving had recommended a by-election be held on Oct. 10 to fill the vacant council seat.

Irving made no such recommendation, Fratesi said. She simply outlined the options available to Council under the Municipal Elections Act, but made no attempt to suggest which one should be selected, the CAO said.

The headline, which went uncorrected in both Monday's and Tuesday's papers, was unsupported by anything in the accompanying article by reporter Dan Bellerose.

"The headline in the Sault Star was completely incorrect," Fratesi announced. "That needs to be stated."

Not a word of Fratesi's public criticism of the Star's headline writer appears in today's paper.

To receive free, real-time E-mail updates of SooToday.com's exclusive coverage of local news, just send an Email with "SUBSCRIBE" in the subject line to helwig@sootoday.com.