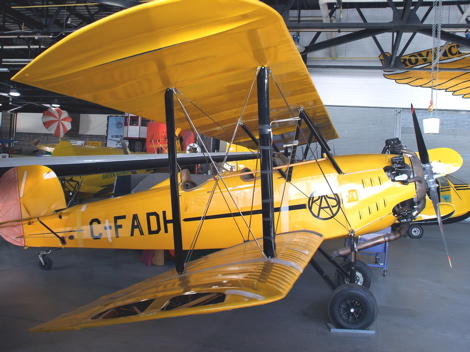 The Canadian Bushplane Heritage Centre (CBHC) is undertaking the restoration of its Fairchild KR-34.

This plane was used in the first attempts to drop water from an aircraft on forest fires while stationed at Temagami from 1938 to 1944.

In 1945 it was purchased by Robert Dale of Sault Ste. Marie for his fledging bush airline, Air-Dale Ltd.

In 1948 it suffered engine failure on take-off and crashed.

After 15 years the wreckage was retrieved and brought to the hangar in the Sault and was restored to flying condition in 1984 in time for the 60th anniversary of the Air Service.

Just like us, aircraft get wrinkles and cracks as they age; this is especially true of ones covered in canvas.

The KR-34 restoration project includes the replacement of the original canvas with more durable modern polyester fabric for longer life.

It will also include a full mechanical overhaul of the aircraft to flyable condition.

This total project requires an investment of $30,000 and is slated for completion for the summer of 2013.

Today, we acknowledge of support of the Ninety-Nines, Inc. founded on November 2, 1929, by 99 women pilots.

Amelia Earhart was the first president.

It is now a 6,500-member non-profit world-wide organization, with members in the United States, Canada, and 30 other countries.

The Ninety-Nines is the world's oldest and largest organization of women pilots.

The Ninety-Nines Canadian Award in Aviation was established in 1974 to promote aviation throughout Canada.

The award is presented to charitable institutions and organizations, whose activities promote, improve or preserve aviation and aeronautics in Canada - click here.

Presenting The Canadian Aviation Award to the CBHC [was] Gayle Manley, representative of the Ninety-Nines Inc. from Sault Ste. Marie, Ontario

Those interested in the project and wishing to become sponsors or for more information, please contact Todd Fleet-Curator at 705-945-6242, ext. 203.

An investment in the restoration of the Fairchild KR-34 has many benefits for you, the community and the Canadian Bushplane Heritage Centre.