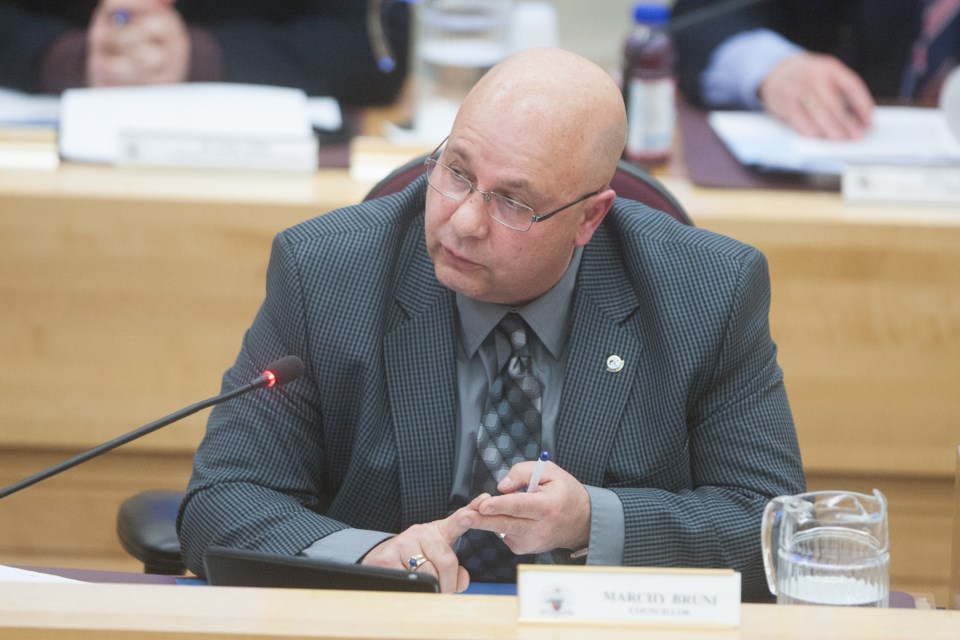 A city councillor had strong words for both the management and the union embroiled in a back-and-forth war of words regarding realignment of the city’s fire services.

Bruni’s comments were broken up by applause from the gallery present at Monday night’s city council meeting, in which council accepted a report by city CAO Albert Horseman, which recommended the city not seek an independent third-party comprehensive risk assessment at this time.

After quieting the interruption, Bruni took everybody to task.

“Shame on everybody. We should be working together and not against each other. This is going to continue and be a toxic environment for everyone,” said Bruni.

He said he expects Horsman to bring the two parties together.

However, Bruni said he didn’t appreciate language in the CAO’s report to council, suggesting it was one-sided.

In the report, Horsman writes, “Unfortunately, with the exception of a couple of meetings in December 2015 and January 2016 there has been limited direct input to the Chief Fire Services by the Association although there has been three grievances filed in connection with the plan.”

Bruni suggests the comprehensive risk assessment should have been conducted prior to the fire services realignment plan, in which 20 front line firefighter positions will be cut over three years by attrition.

“Now we are in this situation where both parties don’t talk to each other, and to me it’s a very toxic environment and it’s not a safe environment,” said Bruni.

Ward 1 councillor Paul Christian agreed a risk assessment needs to be completed at some point in the process, but called the dispute between the union and management ‘disheartening’.

“Some changes have to be made. I just wish we could come to some kind of agreement to sit down and work some of this stuff out. It’s the public at large that need to be protected and know they are protected,” said Christian.

A lack of direction from the province in terms of issues such as firefighter staffing levels, said Christian, is frustrating

“The province is very quick to tell us how many parking spaces we need to have in a parking lot, yet something as important as fire services — there’s no mandated issues,” he said.

In the report, the CAO notes six of those positions have already been cut due to retirements, with four EMS supervisors having been hired in January.

Eight paramedics have yet to be hired, as well as hires on the fire side in education and prevention officers, as well as a mechanic among other positions to be added.

Horsman suggested to do the comprehensive risk assessment prior to completion of the three year realignment would be premature, instead it will be completed by a third party near the end of the realignment at an estimated cost of $50,000.

In October, city council accepted a proposal put forth by Fire Chief Mike Figliola cutting 20 firefighter positions within the next three years in a realignment of fire services.

Mayor Christian Provenzano and council have repeatedly resisted calls — by the Sault Ste. Marie Professional Firefighters Association, former Ontario Fire Marshal Pat Burke, as well as from both opposition parties in Queen's Park — for the risk assessment to be completed and the SSMPFFA were not granted an opportunity to speak as a delegation at Monday's meeting.

Provenzano suggested that, despite reports by the SSMPFFA and local media, the Office of the Fire Marshal does not conduct free comprehensive risk assessments — only reviews.

Between November 12 and February 25, the Sault Ste. Marie Fire Service responded to 24 fire calls, five of which required overtime by calling in additional resources to supplement the smaller complement of firefighters as result of the realignment plan.

The service now maintains 13 firefighters on staff versus the previous complement of 17.

Figliola suggested the overtime spent on those five calls was far less than maintaining 17 firefighters at all times.