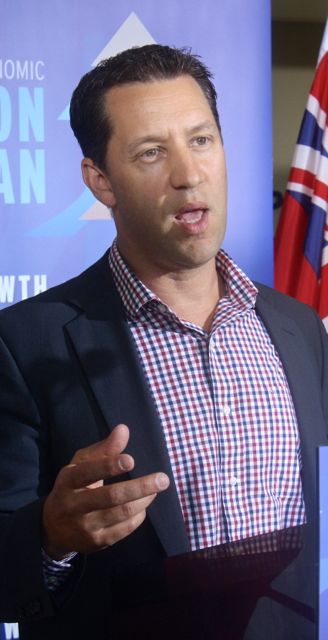 SAULT STE. MARIE - David Orazietti, MPP was joined today by Joe Oliver, Minister of Natural Resources Canada and Bryan Hayes, MP, to mark the official opening of the Canada-Ontario Invasive Species Centre and to highlight the accomplishments of the Insect Production and Quarantine Laboratories at the Great Lakes Forestry Centre in Sault Ste. Marie.

“As part of our 2007 election platform our government initiated and followed through on a commitment to develop an invasive species research centre in our community,” said Orazietti. “The new research centre in Sault Ste. Marie serves as a model for other jurisdictions and is an excellent example of collaboration and coordination between various levels of government, neighbouring jurisdictions, municipalities, and non-governmental stakeholders and partners.”

Aquatic invasive species are also recognized as a serious problem threatening the biodiversity of our lakes and rivers, and the new centre will play a coordinating role in addressing their spread.

In the Great Lakes Basin alone, nearly 200 species from around the world have been introduced and include many well-known invaders such as sea lamprey, zebra mussel, round goby and purple loosestrife.

The Great Lakes Forestry Centre is one of six Canadian Forest Service centres in Canada.

Research is being conducted on the life cycle of these forest pests to develop detection and control techniques.

Ontario Ministry of Natural Resources' scientists will collaborate with NRCan researchers on these initiatives and provincial staff will use the knowledge generated from this research to monitor areas where these insects may appear and to provide information to foresters and communities on control and mitigation measures.