Unity, healing and reconciliation at the forefront of bishop's cycling journey across Canada
Jun 26, 2018 6:30 PM By: James Hopkin 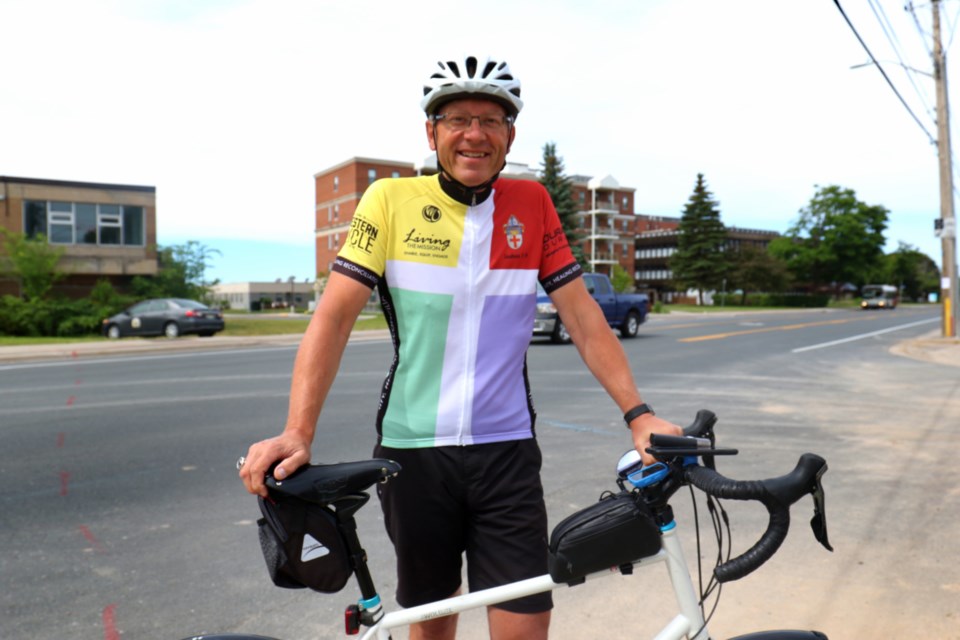 The Right Reverend Rob Hardwick, bishop of the Anglican Diocese of Qu'Appelle, is cycling across Canada for unity, healing and reconciliation this summer. James Hopkin/SooToday

The Right Reverend Rob Hardwick is cycling across Canada in the name of unity, healing and reconciliation.

Hardwick, who has served as the bishop of the Diocese of Qu’Appelle for the past five years, knows about the often uneasy relationship between Indigenous and non-Indigenous people in Canada.

He says that his diocese, located in southern Saskatchewan, had the longest-running residential school in Canada.

“This bike ride is a form of penance, in a way, but it’s also to try and bring reconciliation.”

Hardwick’s cross-country trek began in Victoria, B.C. and is scheduled to wrap up Aug. 1 in St. John’s, Nfld.

The bishop says that he’s been speaking with a number of Indigenous groups and church groups about reconciliation.

“I’m meeting people who really desire to be reconciled,” said Hardwick. “I’m hearing a lot of desire to do that, but not knowing how to do it.”

“It’s wonderful to see so many people who would like to make that journey, but just wondering how to make that first step.”

His stop in Sault Ste. Marie also included some cycling, as people joined him for a bike ride from St. Luke’s Cathedral to Garden River Community Centre for a feast over the weekend.

He says that it was an honour to be in the homeland of Chief Shingwauk.

“I shared what it was that I was doing, and what a great honour it was to come to that particular sacred place, where such a great leader had led his people, both courageously and spiritually,” said Hardwick. “His example is one that many of us could follow.”

The bishop is also using his cross-country tour in order to raise $2 million for Indigenous ministries within the Anglican Church of Canada, Habitat for Humanity, and to conduct evangelism and mission work for his diocese in Saskatchewan.

Hardwick’s trek, however, came to a crashing halt this past Friday.

His wife, Lorraine, was involved in a single vehicle accident just outside of Wawa this past Friday, claiming the couple’s vehicle, their camper trailer and one of Hardwick’s spare bikes.

His wife escaped the crash with minor injuries.

“It’s made us even more determined,” Hardwick said. “This is an important journey.”

More information on how to donate to Hardwick’s cycling campaign can be found at The Anglican Diocese of Qu’Appelle’s website.