Algoma U to join Ontario University Athletics in 2013 (Updated)

Algoma University is officially a part of Ontario University Athletics. The school, in conjunction with OUA officials, made the announcement on Thursday morning in a joint release. 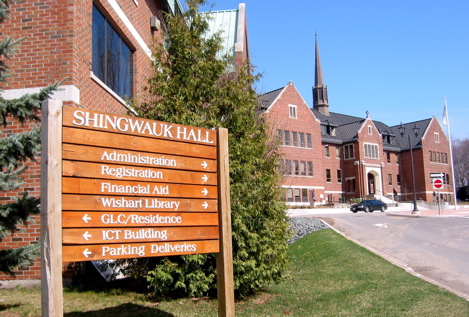 Algoma University is officially a part of Ontario University Athletics.

The school, in conjunction with OUA officials, made the announcement on Thursday morning in a joint release.

“We were very careful and systematic about thinking through how to move forward on this,” said AUC President Dr. Richard Myers. “We did a pretty good analysis of where we might enter teams. We looked at factors like which sports are of interest to our students and which sports are of interest to people in Sault Ste. Marie. You want to be engaged in sports that will attract fan interest.”

Myers added that facilities and local talent in the sports also played a role in deciding which sports the school would enter as an OUA member.

Making the move to OUA athletics also adds to the reputation of the university around the province when recruiting players for the future.

“It’s important for us to be able to convey to the public that we’re a university just like Western, Queens, Trent, Brock and all of the others,” said Myers.

The school will also add portable bleachers which will allow the seating capacity to be in the range of 1,000 spectators.

Athletics Director Mark Kontulainen also said other work could be done on the facility down the road, which would include updated weight and cardio rooms. The latest the new locker rooms would be in place is next summer, prior to Algoma’s first OUA season though Kontulainen did say that the sooner the locker rooms were in place, the better.

Coaching basketball will be a pair of familiar faces as Thomas Cory and Ryan Vetrie will remain in their current posts; Cory as the Men’s Basketball coach and Vetrie as the Women’s coach.

Following is a full release from Algoma University.

Dr. Richard Myers, the University's president, says: "Varsity athletics is a key element of student life and a critical link between any university and its home community. Our student athletes will be thrilled to bring the highest level of provincial sport to the people of Sault Ste. Marie and to the members of the Algoma community."

In addition to basketball, soccer, and curling, the three already existing Varsity sports at Algoma, the University is adding cross country running, nordic skiing, and wrestling programs for both men and women.

Coaches have been hired and will be announced over the coming weeks.

The campus Fitness and Recreation Centre that bears his name was built in 1992, and since that time the University has hosted several Provincial-level events.

The Thunderbirds joined the Ontario Colleges Athletic Association (OCAA) in 2001, and since that time have won multiple medals in both basketball and curling.

The University hosted the 2011 OCAA Basketball Championships here in Sault Ste. Marie in 2011, and has co-hosted Curling Championships as well as the OCAA Annual General Meeting.

"Algoma University has an impressive track record of providing quality varsity athletics programs that align with the vision and ideals of the OUA," said OUA Executive Director Ward Dilse. "We welcome Algoma University to our membership, and are excited to count the Thunderbirds as our latest league member."

Members of the OUA were in Sault Ste. Marie for a site visit in April, before putting forward the motion to have Algoma U join the organization at their Annual General Meeting in May.

"Competing in the OUA will be a terrific experience for our Student-Athletes and Coaches," said Mark Kontulainen, athletic director at AU. "Playing at the premier level of university sport in Ontario will be a tremendous opportunity for them to grow and excel. Both our new and existing programs have been busy preparing for their inaugural seasons in the OUA, and I have been impressed with their motivation to assemble competitive teams. Our staff, faculty, students, and the greater community look forward to seeing our teams compete at this level."

Algoma University has launched its Essential Elements Campaign to expand its campus and offer more scholarships and awards to students.